Canada hangs tough for win over Finland at Ford Worlds 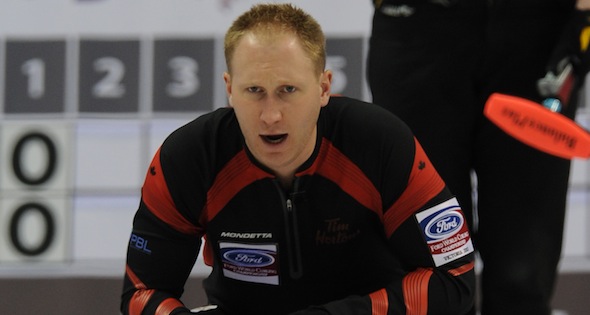 With the win, Canada improved to 2-0 while Finland dropped to 0-2 in the 12-team round-robin standings. Kauste made a short raise-takeout in the third end to score four and silence the pro-Canadian Easter Sunday crowd in Victoria, B.C. But Canada started the comeback with one in the fourth end and then a crucial steal of three in the fifth thanks to a series of precision come-around draws from Fry and Jacobs that left Canada sitting three behind two centre guards. Kauste’s outturn draw attempt to bite the button was heavy and wide, giving Canada the stolen three points. “We definitely struggled early in that game, but we were persistent,’ said Jacobs. “We wanted to make sure that we fought back. They made a lot of shots in that end when they got four and we didn’t make any. A pretty embarrassing end of curling for us, to be honest with you. They made the shot for four, but we hung in there and came back.” Canada would steal two more in the eighth end when Kauste missed the same outturn draw to bite the button. The Finns would take one in the ninth before being run out of rocks in the 10th. 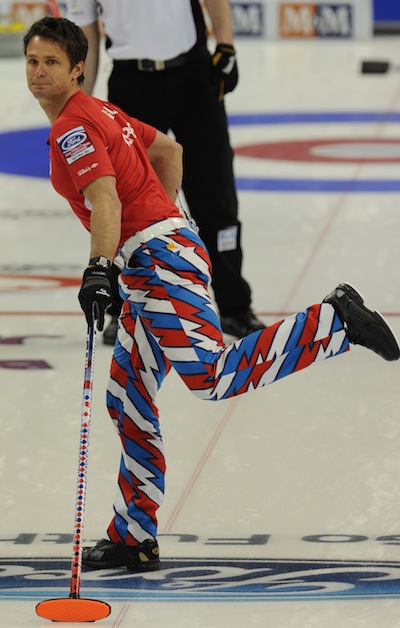 “We didn’t get down on each other after we gave up the big four,” said Jacobs, whose team returns to the ice later Sunday in a 7 p.m. (all times Pacific) showdown against Scotland’s David Murdoch. “In the past, we probably would have. Even a couple years ago, that game would have went the other way. But we’ve learned from our mistakes in the past We’re here to fight every single rock of every end, and we were able to do that, and we got a break with a couple misses from them. We’ll take it.” In the only other game on Sunday morning, Norway’s Thomas Ulsrud (1-1) hit the win column by making an open hit to score two in the 10th end for an 8-7 triumph over Switzerland’s Sven Michel (1-1). Down 4-2 through four ends, Norway got back in the game with one in the fifth and a steal of two in the sixth. “We were struggling before the (fifth-end) break,” admitted Ulsrud. “The Swiss guys were all over us so we had a talk at the break. We said we just have to go for it. We were lucky enough to get a big steal of two points in the sixth end, which never hurts. It was really important (to win). I’ve been struggling with where to put the broom for the guys. I told them, ‘You have to watch me more. If you want to know how it curls, watch me.’ I can’t throw all rocks though. Joking aside, it’s been tough to place the broom.” Sweden’s Niklas Edin (2-0), Scotland (1-0), Brady Clark of the U.S. (1-0), China’s Rui Liu (1-1),  Jiří Snitíl of the Czech Republic (1-1), Japan’s Yusuke Morozumi (0-1), Denmark’s Rasmus Stjerne (0-1) and Russia’s Andrey Drozdov (0-2) all had byes in the Sunday morning draw. The Ford Worlds resume on Sunday, with draws scheduled for 2 p.m. and 7 p.m. For more event information, including rosters and the official draw, and to purchase tickets, go to: www.curling.ca/championships/worlds/. Live scoring and standings are available at: www.curling.ca/scoreboard/?e=12. TSN/RDS, the official broadcast partner of the Canadian Curling Association, will provide live coverage of Canada’s round-robin games, in addition to all playoff games. In French, all of the games will be shown live on RDS2 with the exception of the Canada-Scotland game on Sunday at 7 p.m. (to be shown on the RDS main network).