A pair of pre-event favourites picked up victories on Saturday night in Draw 2 of the 2013 Ford World Men’s Curling Championship, presented by Booster Juice. 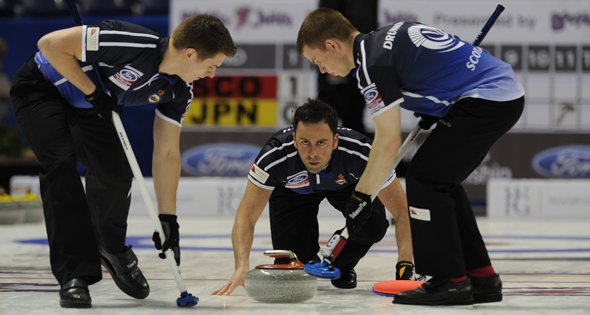 Scotland’s David Murdoch made a successful return to the Save-On-Foods Memorial Centre in Victoria (he lost the 2005 Ford Worlds gold-medal game here to Canada’s Randy Ferbey) with a 7-5 win over Yusuke Morozumi, while Sweden’s Niklas Edin capped a perfect opening day with a 6-5 win over Russia’s Andrey Drozdov. The Scots controlled most of the game against the Japanese as both teams were making their event debuts. Scotland took control with four in the fourth end and never looked back. “It’s just incredible for me (to return to the Save-On-Foods Memorial Centre),” said Murdoch. “It’s hard to believe it was eight years ago, and I loved every moment of it. It’s so good to be back. I just love this town and it just feels awesome. One of the things we talked about was that we really wanted to start with a solid couple of games. If you’ve got any hope of trying to get into that (Page playoff) one-two game, you need to start well. We’ve got that first win and it’s a nice way to start.” Sweden, meanwhile, improved to 2-0 with another late comeback. In the afternoon draw, the Swedes needed to score four in the ninth end and hung on for a 7-6 win over Finland’s Aku Kauste. In the evening draw, Edin had to make a wonderful tap-freeze with his final shot in the 10th end, then watched Russian skip Andrey Drozdov throw his last-rock pick attempt overcurl, giving the winning stolen point to Sweden for a 6-5 triumph. The loss dropped Russia to 0-2. “It could have been 0-and-2 instead, so we’re really happy about the outcome of this day,” said Edin. “We need to keep focusing and make more shots in important situations. I still think we played pretty well and we made a lot of shots. We got some bad breaks here and there, and the (opposing) skips have played really well against us. We need to keep the focus up and put pressure on them instead of the opposite.” In other evening action, China’s Rui Liu bounced back from an opening loss to Canada’s Brad Jacobs (who had the bye in the evening draw) with a 12-5 win over Jiřί Snitίl of the Czech Republic. The Chinese skip made a double takeout with his first rock of the seventh end, and then made a perfect split to score a game-changing five. The result left both teams with a 1-1 record. “For the first game we were just learning the ice and adapting to the world championship environment,” said Liu. “After that game, even although we lost, we adjusted quickly for the second game.” In the other Saturday night game, Brady Clark of the U.S. made his first World Championship appearance a winning one, scoring three in the first end and two more in the third for an 8-3 win over Denmark’s Rasmus Stjerne. “We got a strong start in that game, and we came out shooting pretty well and carried some momentum. We made a few key shots and got the win so we’re real happy to start off the week with a ‘W,’ ” said Clark. “We came out and all felt comfortable. When you walk out there and you have a bunch of people cheering, you get a little bit of adrenaline going. But we came out and played our game. Denmark’s a great team, and we got a few breaks here and there and got the win.” Canada, Switzerland’s Sven Michel (1-0), Finland (0-1) and Norway’s Thomas Ulsrud (0-1) all had byes in the late draw. The Ford Worlds resume on Sunday, with draws scheduled for 9 a.m., 2 p.m. and 7 p.m. For more event information, including rosters and the official draw, and to purchase tickets, go to: www.curling.ca/championships/worlds/. Live scoring and standings are available at: www.curling.ca/scoreboard/?e=12. TSN/RDS, the official broadcast partner of the Canadian Curling Association, will provide live coverage of Canada’s round-robin games, in addition to all playoff games. In French, all of the games will be shown live on RDS2 with the exception of the Canada-Scotland game on Sunday at 7 p.m. (to be shown on the RDS main network).