Scotland’s David Murdoch prepared for an evening showdown against the home team at the 2013 Ford World Men’s Curling Championship, presented by Booster Juice, with an extra-end victory on Sunday afternoon at the Save-On-Foods Memorial Centre in Victoria, B.C. Murdoch made an open hit in the 11th end for a 5-4 triumph over Denmark’s Rasmus Stjerne. 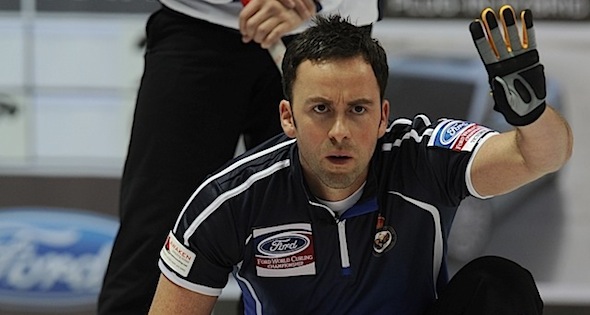 With the victory, the Scottish team from Aberdeen improved to 2-0, the same record as the Brad Jacobs-skipped Canadian team the Scots will face in the evening draw on Sunday at 7 p.m. (all times Pacific). “It’s the game everybody wants to play in,” said Murdoch with a smile. “It’s a fantastic showcase. Those guys have played really well so far, and I think we have, too. We want to take that form into the game.” Scotland was pushed hard by the 0-2 Danes in a game that featured nothing but single points. The key was a Scottish steal of one in the ninth when Stjerne rolled out on a hit attempt. “These guys are a good team, it was always going to be a tight one,” said Murdoch. “We started a little bit slower today than we did yesterday so we had to adjust and hang  in there. We came out in the second half and turned it up a little bit, so it was good to get the hammer and a win on the board.” In other Draw 4 action, the Czech Republic’s Jiří Snitíl also needed to work overtime to eke out a 7-6 win over Russia’s Andrey Drozdov (0-3). Snitíl’s Czech’s got through the opening weekend of the Ford Worlds with a 2-1 record. “We’re happy with our position, I must say,” said Snitíl, who didn’t need to throw his last shot when Drozdov’s hit attempt rolled too far and left the Czechs laying shot rock. “As I keep saying all the time, we just try to concentrate on going shot by shot and trying not to get too excited about the score. Just try to make our shots.” Japan’s Yusuke Morozumi, meanwhile, picked up his first win of the championship. The Japanese skip improved to 1-1 by making a double takeout with his last rock of the 10th end to score the winning point in a 7-6 triumph over Brady Clark of the U.S. (1-1). Japan opened the game with a steal of three in the first end and never trailed the rest of the way. “We’re very very pleased to win this game,” said Morozumi through an interpreter. “It was our first win so we’re very happy about it. We were very nervous after the seventh end when they tied the game (Clark drew for three), but we expected this because it’s the World Championship. We predicted this would happen so what we did was try our best and thankfully it worked out for us.” In the other afternoon game, China’s Rui Liu improved to 2-1 with a 5-4 victory over previously unbeaten Niklas Edin of Sweden (2-1). Canada, Switzerland’s Sven Michel (1-1), Norway’s Thomas Ulsrud (1-1) and Finland’s Aku Kauste (0-2) all had byes in Draw 4. On Monday at the Ford Worlds, draws are scheduled for 9 a.m., 2 p.m. and 7 p.m. For more event information, including rosters and the official draw, and to purchase tickets, go to: www.curling.ca/championships/worlds/. Live scoring and standings are available at: www.curling.ca/scoreboard/?e=12. TSN/RDS, the official broadcast partner of the Canadian Curling Association, will provide live coverage of Canada’s round-robin games, in addition to all playoff games. In French, all of the games will be shown live on RDS2 with the exception of the Canada-Scotland game on Sunday at 7 p.m. (to be shown on the RDS main network).