The Quebec team from the Magog Curling Club led throughout the round robin, and in the championship final they showed why, dominating the game for a decisive 10-2 victory over B.C. on Sunday afternoon at the RA Centre in Ottawa. 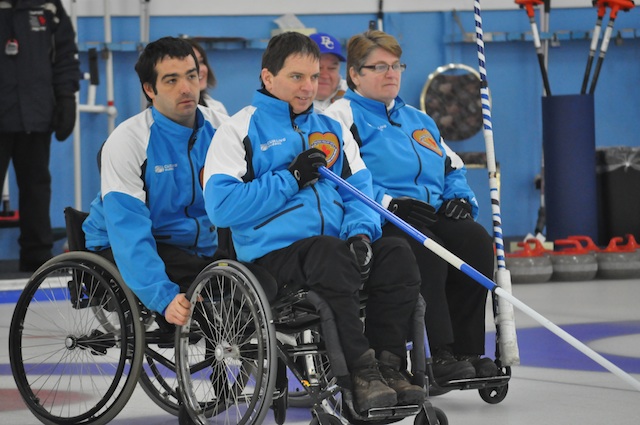 Quebec’s Sebastien Boivert, and Johanne Daly back skip Benoît Lessard as he prepares to throw his rock in the final of the Canadian Wheelchair Curling Championship in Ottawa (Photo Morgan Daw)

For Benoît Lessard and his team of Carl Marquis, Sébastien Boisvert, Johanne Daly and coach Germain Tremblay, the win marks the first time Quebec will bring home the national wheelchair curling title. In the semifinal on Sunday morning, B.C.’s Gary Cormack defeated Alberta’s Bruno Yizek 8-7 to move into the championship game. But in the final, Cormack and his team – Frank La Bounty, Vince Miele, Alison Duddy, Samantha Siu and coach Karen Watson, who represent the Marpole Curling Club in Vancouver and the Richmond Curling Club in Richmond – couldn’t match the precision rock placement and hitting ability of the Quebec team. Lessard scored four points in the first end and never looked back, stealing another point in the second and allowing only a single from B.C. in the third. At the fourth-end break, Quebec led 7-1 on the scoreboard and held the edge in shooting percentages at 81 per cent. B.C. continued to struggle in the fifth. Quebec once again relied on its strong hitting ability to keep B.C. from getting rocks into position, and on his last shot, Cormack’s draw came up short, allowing Quebec to steal one more. Trailing 8-1 in the sixth, B.C. third Frank La Bounty made a perfect draw to lie buried, but B.C. was unable to get another rock in position and was only able to score one. In the seventh, Lessard made a difficult angle raise take-out to score two, putting the game away – and bringing the Canadian Wheelchair Curling Championship title home to Quebec. Results and statistics from the round robin and championship games is available at www.curling.ca and https://www.curling.ca/championships/wheelchair