Canada knocks off Scotland in first-place showdown at Ford Worlds

Team Canada is all alone on top of the standings at the 2013 Ford World Men’s Curling Championship, presented by Booster Juice. The home team at the Save-On-Foods Memorial Centre in Victoria, B.C., rolled to a 9-4 win over Scotland’s David Murdoch on Sunday night in a battle of the final two unbeaten foursomes in the 12-team round-robin competition. 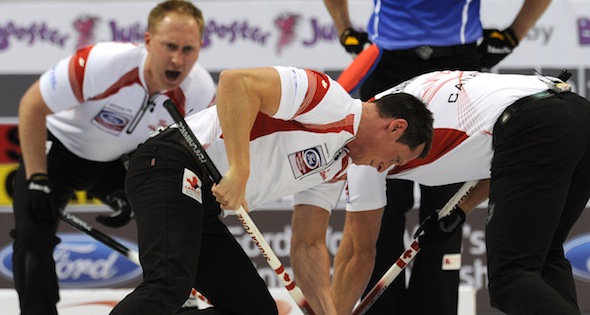 With the victory, the Sault Ste. Marie, Ont., team of skip Brad Jacobs, third Ryan Fry, second E.J. Harnden, lead Ryan Harnden, alternate Matt Dumontelle and coach Tom Coulterman come out of the opening weekend unscathed at 3-0. “We’re out here trying to win every game,” said Jacobs, whose ninth-end raise for two prompted handshakes. “What I expect is for us to come out each and every time and play really well. Like I keep saying, I’m pretty sure that if you do that, the leaderboard, the scores, winning the games, it’s going to take care of itself. And it has so far. Being 3-and-0? Awesome. We’re in great shape. Just have to keep it going.” Canada put the pressure on Scotland (2-1) from the first end onward. Murdoch was looking at four Canadian counters with his last rock, and had to make a nice shot just to give up a steal of one. The Scots answered back with a deuce, but Jacobs took control of the game by scoring deuces of his own in the third, fifth and seventh ends (the latter a steal when Murdoch was light and tight with his last-rock draw) while forcing Murdoch to singles in the fourth and eighth ends. “We bounced back wonderfully (from giving up the second-end deuce). We got a deuce, we forced, we got a deuce, and that’s curling right there, at its best. That’s really the name of the game,” said Jacobs. “We did everything right today. After our first game, we ate lunch, we relaxed, we had a nap, we had a nice workout before the game. I think we all felt great going into that game. I have to give a lot of credit to my guys; they played phenomenal. They made it pretty easy on me as a skip. That was an awesome game.” In other Draw 5 action, Denmark’s Rasmus Stjerne finally hit the win column. Stjerne took three in thesdecond end, then added big steals of one in the fifth, two more in the sixth and another deuce in the seventh to win 9-2 over Finland’s Aku Kauste. With the win, the Danes improved to 1-2 while Finland dropped to 0-3. “It was an important win,” admitted Stjerne. “We didn’t come out strong yesterday but we came out strong today. We played a good game against Scotland (in the afternoon draw, a 5-4 loss) but had the tough breaks in the end and didn’t get it, so we knew we needed this because the Finnish guys have been playing really well, so it’s good to get this win. We didn’t want to get too worried because we’ve still got a lot of strong competitors ahead of us. It was a must-win for us for sure.” In a battle of teams on the Olympic qualifying bubble, Switzerland’s Sven Michel scored a game-changing three in the sixth end en route to an 8-4 victory over Brady Clark of the U.S. The win gave the Swiss a 2-1 record, while the U.S. dropped to 1-2. “It was really important to have a good start so that we could put them under pressure, then he had some difficult shots which he could not make,” said Michel. “I think the sixth end was a really big end. We were in a little bit of trouble earlier in that end, he takes some risk with his last shot and it meant that we could make that three — that was the key moment in that game.” Also, Norway’s Thomas Ulsrud scored deuces in the second, fourth and sixth ends and sailed to an 8-6 win over Japan’s Yusuke Morozumi. With the win, Norway improved to 2-1 while Japan dropped to 1-2. “It was fun to play out there,” said Ulsrud. “A lot of noise with the classic going on between Scotland and Canada. It was just good to be on the ice. But we had a good game ourselves; we were happy.” Sweden’s Niklas Edin (2-1), China’s Rui Liu (2-1), the Czech Republic’s Jiří Snitíl (2-1) and Russia’s Andrey Drozdov (0-3) all had byes in the evening draw. On Monday at the Ford Worlds, draws are scheduled for 9 a.m., 2 p.m. and 7 p.m. For more event information, including rosters and the official draw, and to purchase tickets, go to: www.curling.ca/championships/worlds/. Live scoring and standings are available at: www.curling.ca/scoreboard/?e=12. TSN/RDS, the official broadcast partner of the Canadian Curling Association, will provide live coverage of Canada’s round-robin games, in addition to all playoff games. In French, all of the games will be shown live on RDS2.