Sweden’s Niklas Edin improved to 3-1 on Monday morning at the 2013 Ford World Men’s Curling Championship, presented by Booster Juice, but as has been the case this week for the young team from Karlstad, it was anything but easy. Edin, the reigning European champion, had a runback takeout for the win in the 10th end against Brady Clark of the U.S. but his rock overcurled and it resulted in a blank, forcing an extra end. 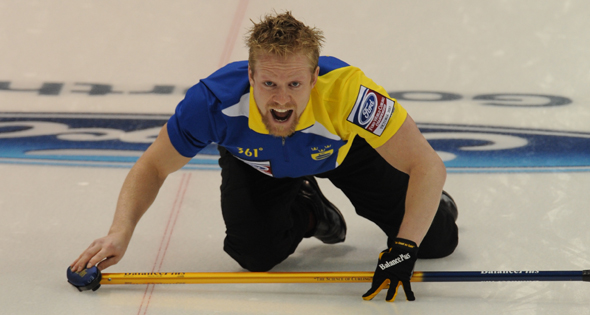 But in the 11th, Edin calmly made a draw to the four-foot looking at two U.S. counters for a 7-6 victory that left the U.S. with a 1-3 record. “Normally, we’d be happy with 3-and-1 (when playing well), but now we’ve been lucky to be 3-and-1 after four games,” admitted Edin. “But I think the teams have played really well against us and maybe we haven’t made all of the key shots, but it still feels pretty good. If we can cut down some of those mistakes, I think we’re ready to play against the best teams as well.” “We talked about our performance before the tournament started, that we didn’t want to waste any energy,” added Edin. “Now we’ve had to waste energy, but it feels like we have momentum going and we can still make a lot of shots. Just cut out some of those big mistakes and we should be ready.” With the win, the Swedes remained tied for second place in the 12-team round-robin standings at 3-1 with China’s Rui Liu and Scotland’s David Murdoch, both of whom posted wins on Monday morning. Canada’s Brad Jacobs (3-0) had the bye in the Monday morniong draw. Scotland bounced back from a disappointing Sunday night loss to Canada in impressive fashion on Monday, cruising to a 7-3 win over Jiří Snitíl of the Czech Republic (2-2). “The most important thing for us was waking up with a lot of energy and really firing from the start like we did in the first two games,” said Murdoch, who opened the game with a stolen point in the first, and put it out of reach with deuces in the third and sixth ends. “Certainly in that first end we were on fire and just really bossed the game from start to finish. That was really great to see from the guys. It’s always a good thing to just get on with it. It’s a long week  and you do have to bounce back — you’re going to lose games this week, there’s a lot of good teams out there. It’s great to see that we’ve got the hunger to go forward.” China, meanwhile, picked up a crucial steal of two in the eighth end en route to a 7-5 triumph over Japan’s Yusuke Morozumi (1-3), a third straight victory for the Chinese since losing their opener to Canada on Saturday afternoon. “We played more confidently during the past three games and today we just played our own game and were able to relax a little bit,” said Liu. “We were very happy to bring back the Pacific Cup to China again because last year we lost out to New Zealand, but this time we won the Pacific-Asia game so we feel good. It was our expectation to be on a record of three and one, but we just want to keep playing our own game, at our level and hopefully things will go well for us.” In the other Draw 6 game, Denmark’s Rasmus Stjerne bounced back splendidly for an 8-6 win over Russia’s Andrey Drozdov. The Russians had taken a 4-0 lead all on stolen points (one in the second, three more in the third) but Denmark took control from there, and put the win away with a steal of three in the ninth. With the win, Denmark evened out at 2-2 while Russia remained in the cellar at 0-4. “We had a tough break in this game to put us far behind, and we had to fight our way back,” said Stjerne. “I was glad with the way we bounced back. We got a big two (in the fourth end) after calming down, and we just stuck together and worked on all the things we’ve been working hard on back home. It was nice to see.” Besides Canada, Norway’s Thomas Ulsrud (2-1), Switzerland’s Sven Michel (2-1) and Finland’s Aku Kauste (0-3) had byes in the morning draw. Play at the Ford Worlds resumes on Monday with draws scheduled for 2 p.m. and 7 p.m. (all times Pacific). For more event information, including rosters and the official draw, and to purchase tickets, go to: www.curling.ca/championships/worlds/. Live scoring and standings are available at: www.curling.ca/scoreboard/?e=12. TSN/RDS, the official broadcast partner of the Canadian Curling Association, will provide live coverage of Canada’s round-robin games, in addition to all playoff games. In French, all of the games will be shown live on RDS2.