It would be hard to imagine Brad Jacobs and Team Canada getting off to a better start at the 2013 Ford World Men’s Curling Championship, presented by Booster Juice. 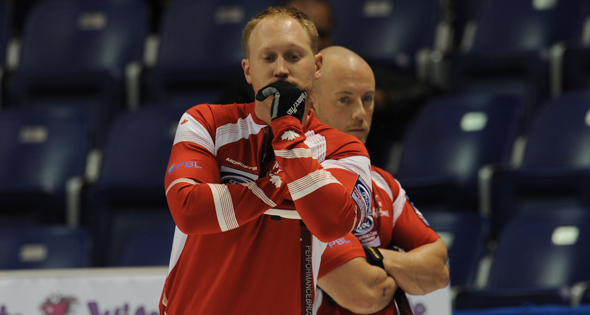 Jacobs’ team from Sault Ste. Marie, Ont., won its fourth straight game to open the 12-team round-robin competition at the Save-On-Foods Memorial Centre in Victoria, B.C., rolling to a 7-2 victory over Switzerland’s Sven Michel. The result left the Canadian team, rounded out by third Ryan Fry, second E.J. Harnden, lead Ryan Harnden, alternate Matt Dumontelle and coach Tom Coulterman, alone in first place with a 4-0 record. “We’re sticking to the same practices we used through the Brier and everything is still working,” said Fry after the victory. “We’re not looking too far ahead; we just are going to keep playing the way we’ve been playing and hopefully the results keep coming.” Canada never trailed against the 2-3 Swiss foursome. Jacobs was forced to a single point in the first, gave one back to the Swiss in the second, then took control of the game by scoring two in the third, stealing two more in the fourth after Jacobs made a wonderful angle-raise double takeout and Michel was light on his draw, and then adding another steal in the fifth. From there on, it was a matter of keeping things clean for Team Canada, which, as you’d expect, has been a crowd favourite here this week. That has helped make the transition from Team Northern Ontario to Team Ontario easier, suggested Fry. “We were cast into the spotlight when we were in those three playoff games at the Brier, and I think that prepared us quite a bit for this,” he said. “If anything, we’re accepting of being at home (as Team Canada) and loving it, as opposed to putting added pressure on ourselves. It’s more like a fifth or sixth man there (in the crowd) for us, and it’s fun playing there, it’s fun getting cheers for when you make a shot. We’re loving it.” Canada remained the lone unbeaten team, but is being pushed hard by a pair of 4-1 teams: Sweden’s Niklas Edin and China’s Rui Liu. Sweden capped a perfect two-win day by playing its tidiest game of the 2013 Ford Worlds, cruising to a 7-4 win over Jiří Snitíl of the Czech Republic (2-3). “That was the best game by far from our team,” said Edin, who scored deuces in the third and sixth ends and held the 2-3 Czechs to nothing but single points. “It was really solid and we controlled the game. We tried to go more offensively and since we got that early lead we just had to keep the lead so we turned defensively.” The game was an example of why the Swedes were among the pre-event favourites. “Our biggest opponents are ourselves,” said Edin. “If we can just keep up the level of play in each game then we will be in the playoffs.” China, meanwhile, scored three in the fourth end and never looked back in a 6-3 victory over Russia’s Andrey Drozdov (0-5). In the other Draw 7 game, Norway’s Thomas Ulsrud improved to 3-1 with a 7-4 victory over Finland’s Aku Kauste (0-4). Norway, which overcame a last-minute lineup change that saw Thomas Løvold move to third from alternate, replacing Torger Nergård so he could be home for the late stages of his wife’s pregnancy, has gotten steadily better since the opening draw. “It’s a bit  surprising  that we’re going so well (with the lineup change),” admitted Ulsrud. “The coach (Ole Ingvaldsen) talked about it last night saying he was a bit surprised at how well things are going. The first game (an 8-5 loss to the Czechs) was a bit troubling for us, but I’m happy. We need to be up when we look at the schedule we’ve got in front of us … we’re in a good spot.” Scotland’s David Murdoch (3-1), Denmark’s Rasmus Stjerne, Japan’s Yusuke Morozumi (1-3) and Brady Clark of the U.S. (1-3) all had byes in Draw 7. Play at the Ford Worlds resumes on Monday with a draw scheduled for 7 p.m. (all times Pacific). On Tuesday, draws are scheduled for 9 a.m., 2 p.m. and 7 p.m. For more event information, including rosters and the official draw, and to purchase tickets, go to: www.curling.ca/championships/worlds/. Live scoring and standings are available at: www.curling.ca/scoreboard/?e=12. TSN/RDS, the official broadcast partner of the Canadian Curling Association, will provide live coverage of Canada’s round-robin games, in addition to all playoff games. In French, all of the games will be shown live on RDS2.