Brad Jacobs and his Canadian teammates are thriving under the pressure of being the home team at the 2013 Ford World Men’s Curling Championship, presented by Booster Juice. Team Canada won its fifth straight game on Monday night at the Save-On-Foods Memorial Centre in Victoria, B.C., rolling to a 7-2 win over Brady Clark of the U.S. 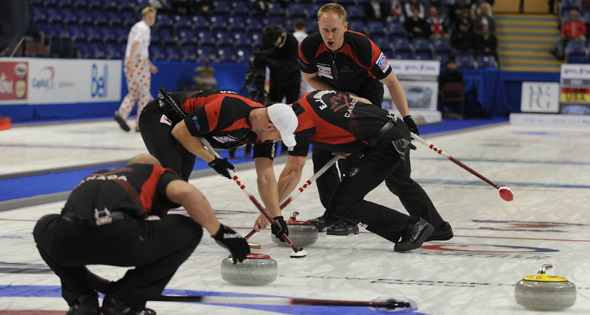 With the victory, Jacobs, third Ryan Fry, second E.J. Harnden, lead Ryan Harnden, alternate Matt Dumontelle and coach Tom Coulterman remained the lone unbeaten country in the 12-team round-robin competition, clear of a second-place logjam at 4-1 that includes Sweden’s Niklas Edin, China’s Rui Liu (both of whom had byes on Monday night) and Scotland’s David Murdoch. “I’m having a blast,” said E.J. Harnden. “You know what? A lot of people asked us about pressure. We’re just enjoying every single moment, and I think that’s why the pressure isn’t there as much as people expected for us as a new team in our first time here. We’re having a blast, and obviously the results are coming as well.” The results on Monday — Canada won by the same 7-2 score over Switzerland’s Sven Michel on Monday afternoon — spoke for themselves. Canada took the early lead when Jacobs made a lovely split to score two in the second end, and added a single point in the fourth, while holding the U.S. (1-4) to singles in the third and fifth ends. The gloves came off for handshakes after the sixth when Clark whiffed on a double-takeout attempt, leaving an open draw to score four points for Jacobs. “It was a little easier day, but when you’re playing like we are right now, and when other teams are making the mistakes like they are, then it’s going to be a shorter day. And we’ll take it,” said Jacobs, whose team was scored at 91 per cent. “You probably know who’s going to there at the end. Sweden, Scotland, Norway — those are the three that come to mind right off the bat. They’re probably going to be in the mix on the weekend. I just hope that we are as well. We’ll see what happens.” The Scots capped a perfect 2-0 day with an 8-6 win over Switzerland’s Sven Michel (2-3). The victory wasn’t secured until Murdoch made a wonderful skinny double takeout in the ninth end to score a crushing three. That came on the heels of Michel coming up heavy on a draw for three in the eighth end and settling for two. “That was a big shot (the double in the ninth),” said Brewster. “It was worth going for; if we give up one we’re coming home trying to get a two with the hammer, so we felt pretty comfortable being in that position so  it was worth going  for. We got it right. It was a whole team effort.” It was also an impressive bounceback from a loss to Canada on Sunday night, said Brewster. “We were disappointing last  night (against Canada),” conceded Brewster. “What was most disappointing was that we just didn’t turn up. With two more wins today, we’re much more positive. There’s a lot more energy about the team today. We’ve only lost one game and we’ve got a few wins in the bag, so that’s good.” In other Draw 8 play, Denmark’s Rasmus Stjerne gave his playoff hopes a jump-start with a 6-5 extra-end victory over Norway’s Thomas Ulsrud, leaving both teams with 3-2 records. Stjerne made an open hit to score the winning point in the 11th end for his team’s third straight win after opening the Ford Worlds 0-2. “That’s nice,” said Stjerne. “We came in pretty rough the first day. We played well against Scotland and now things are starting to work out our way. We’re just going to keep trying to keep this roll going and see where it takes us.” In other action, Finkand’s Aku Kauste finally hit the win column with a 6-5 triumph over Japan’s Yusuke Morozumi. The result left both teams with 1-4 records. “I was hoping it would be a little bit earlier, but, yes, it was a good game, finally,” said Kauste. “We’ve been just a little bit too inconsistent. It’s almost there. Oh, it feels really good. And not just the win — we finally played almost the whole game really well. It felt better.” Jiří Snitíl of the Czech Republic (2-3) and Russia’s Andrey Drozdov (0-5) also had byes on Monday night. Play at the Ford Worlds resumes on Tuesday, when draws are scheduled for 9 a.m., 2 p.m. and 7 p.m. For more event information, including rosters and the official draw, and to purchase tickets, go to: www.curling.ca/championships/worlds/. Live scoring and standings are available at: www.curling.ca/scoreboard/?e=12. TSN/RDS, the official broadcast partner of the Canadian Curling Association, will provide live coverage of Canada’s round-robin games, in addition to all playoff games. In French, all of the games will be shown live on RDS2.