Czechs pull off upset of Team Canada at Ford Worlds

Team Canada’s win streak at the 2013 Ford World Men’s Curling Championship, presented by Booster Juice, has come to an end in Victoria, B.C. 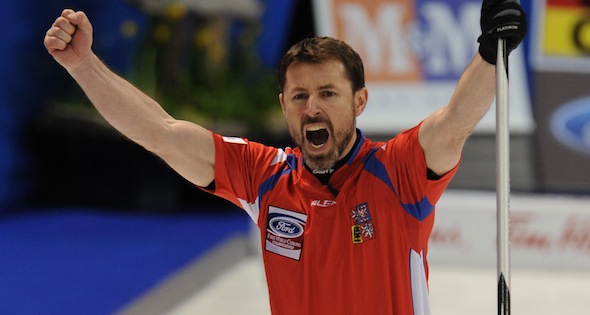 Brad Jacobs’ team from Sault Ste. Marie, Ont. — third Ryan Fry, second E.J. Harnden, lead Ryan Harnden, alternate Matt Dumontelle and coach Tom Coulterman — gave up a crucial steal of one in the ninth end and bowed 6-4 to the Czech Republic’s Jiří Snitíl in Draw 9 play on Tuesday morning at the Save-On-Foods Memorial Centre. With the loss, Canada drops to 5-1, tied for the lead with Sweden’s Niklas Edin in the 12-team round robin. The Czechs, meanwhile, improved to 3-3 with their first win over Canada at a world men’s championship in five attempts. “Full credit to the Czechs, that’s the best team we’ve played so far,” said Jacobs, who’ll return to action in the Tuesday evening draw (7 p.m., all times Pacific) against Norway’s Thomas Ulsrud (4-2). “They made everything. You couldn’t leave a rock anywhere; they’d just hit and roll behind a guard. It was just their day, and it wasn’t ours. Very frustrating. It was just a horrible performance. But we’ll get it back. We’ve dealt with losses before. Some of the shots they were making, it was just like, wow, wow, wow. So what are you going to do?” Canada opened the scoring with a deuce in the second end, but the Czechs weren’t fazed and were able to put Canada on its heels with a steal of one in the sixth thanks to a marvellous hit-and-roll by Snitíl, and another in the ninth when Jacobs attempted a runback double takeout to blank the end, but was wide with his delivery. “That feels very, very good,” said Snitíl. “I think the team played well in the second half. In the first half we had a couple of lucky breaks and made some saving shots. Otherwise we would have probably given up a big number at the beginning of the game and it would have been a totally different story, but we got away with it and the second half was better.” While the Swedes were racking up a 9-8 win over Switzerland’s Sven Michel (the Swiss dropped to 2-4 with the loss), Norway was improving its playoff hopes with a 5-4 win over China’s Rui Liu, scoring nothing but single points en route to the victory. China dropped to 4-2 with the loss, which snapped a four-game win streak. “Huge win,” said Norwegian second Christoffer Svae. “I think this field is probably the tightest it’s been in a while. Building up to the Olympics, everyone is putting in a lot of effort into curling. So every game is just as big. There aren’t any walk-over games.” In the other morning game, Russia’s Andrey Drozdov finally recorded a victory after five losses to open the Ford Worlds. The Russians improved to 1-5 by beating Finland’s Aku Kauste 7-6, recording the winning deuce in the 10th end. Finland dropped to 1-5 with the loss. “I’m really happy to get this first win,” said Drozdov. “What went right today? I was wearing my lucky hat. We were very nervous before today’s game but we are now very happy to have picked up our first win. I think we have been needing to play five to ten per cent better and we did that this morning. This win definitely gives us confidence going forward.” Scotland’s David Murdoch (4-1), Denmark’s Rasmus Stjerne (3-2), Japan’s Yusuke Morozumi (1-4) and Brady Clark of the U.S. (1-4) all had byes on Tuesday morning. Play at the Ford Worlds resumes on Tuesday with draws scheduled for 2 p.m. and 7 p.m. For more event information, including rosters and the official draw, and to purchase tickets, go to: www.curling.ca/championships/worlds/. Live scoring and standings are available at: www.curling.ca/scoreboard/?e=12. TSN/RDS, the official broadcast partner of the Canadian Curling Association, will provide live coverage of Canada’s round-robin games, in addition to all playoff games. In French, all of the games will be shown live on RDS2.