Scotland joins Canada on top of the Ford Worlds standings

Scotland’s David Murdoch and Canada’s Brad Jacobs are the pace-setters at the 2013 Ford World Men’s Curling Championship, presented by Booster Juice. While Jacobs’ Canadian team was enjoying the bye in Draw 10 on Tuesday afternoon at the Save-On-Foods Memorial Centre in Victoria, B.C., Murdoch’s Scots were rolling to an efficient 6-4 win over Russia’s Andrey Drozdov. 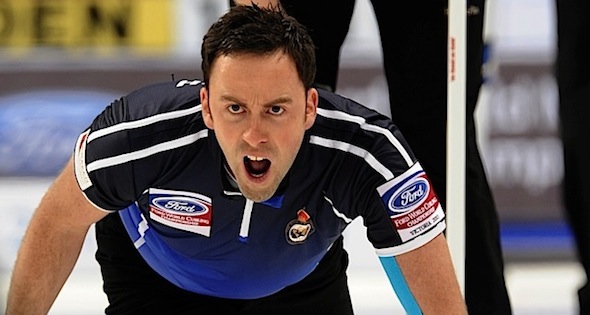 With the victory, Murdoch — who lost to Canada’s Randy Ferbey in the gold-medal game in 2005, the last time the Ford Worlds were staged in Victoria — improved to 5-1, tied with Canada for top spot in the 12-team round-robin competition. The Scots stole three in the fifth end and cruised home for the victory, which left the Russians with a 1-6 record. “We’re doing a lot of things right,” said Murdoch. “We got off to a slow start (in the game); we had a bad rock and we got on the back foot for a while and we had to play some good curling to get back into it. It was a big turning point in the fifth end.  We played  a big runback to lie four and he didn’t  make his shot and we took a three from that end, so that got us on the front foot and we never looked back from there, really.” The Scots are back in action tonight against Brady Clark of the U.S. (2-4) as teams start positioning themselves for a playoff run. Murdoch said looking around at other sheets on the ice, “depends on whether I’m winning or losing. Yes, you look around but if we keep winning we’re on course for the 1-2. But we’ve got a lot of tough games ahead.” Sweden’s Niklas Edin had a chance to be part of the lead pack at 5-1, but was upended 10-8 in an extra end by Japan’s Yusuke Morozumi. The Japanese skip made a runback double-takeout with his last rock of the game to score two in the 11th end, recording his country’s first win over Sweden at the world men’s championship after four previous losses. Japan improved to 2-4 with the win. “I’m very happy to win that game because we’ve been losing games,” said Morozumi. “That was a big one today. I was nervous on the last shot, but I’m always nervous because everyone is so good. So that shot wasn’t really different from other times. Definitely, it was important for our confidence. We’ll just do our best for the rest of our games.” In other action, Denmark’s Rasmus Stjerne extended his winning streak to four games with a 6-5 triumph over Jiří Snitíl of the Czech Republic. The Danes snuffed out any momentum the Czechs had from their upset win over Canada earlier on Tuesday by scoring four in the fifth end. Denmark improved to 4-2 with the victory while the Czechs dropped to 3-4. “We came up pretty strong,” said Stjerne. “We didn’t get the hammer and the first few ends were pretty close. We got a big four in the fifth and controlled it from there. We are kind of in good position but we still have some tough teams ahead. We just need to play one game at a time and that’s what we’ve done so far — we just need to keep it up.” The U.S. snapped a four-game losing streak in impressive fashion, knocking off China’s Rui Liu 10-8. The Chinese (4-2) had won four straight games coming into Draw 10, and took a 7-6 lead with three in the seventh end against the U.S. But Clark responded with three of his own in the eighth, making a draw to backing. Clark then won the game by drawing to backing in the four-foot in the 10th end. “I’d been playing a lot of draws this week and felt real good,” said Clark. “The guys said light out of hand and usually they’re bang on, so about halfway I thought, we’re OK here. The guys swept it perfect, maybe swept it a few inches too deep, but we got shot and won. It’s a big win for us. We really, really needed to step up and go out and get a win against a strong team. China’s a great team. It was back and forth. It wasn’t our strongest game ever but we felt like we had a little bit better execution and took advantage of our opportunities.” Besides Canada, Norway’s Thomas Ulsrud (4-2), Switzerland’s Sven Michel (2-4) and Finland’s Aku Kauste (1-5) had byes on Tuesday afternoon. Play at the Ford Worlds resumes on Tuesday with a draw scheduled for 7 p.m. (all times Pacific). On Wednesday, games are scheduled for 8:30 a.m., 1:30 p.m. and 7 p.m. For more event information, including rosters and the official draw, and to purchase tickets, go to: www.curling.ca/championships/worlds/. Live scoring and standings are available at: www.curling.ca/scoreboard/?e=12. TSN/RDS, the official broadcast partner of the Canadian Curling Association, will provide live coverage of Canada’s round-robin games, in addition to all playoff games. In French, all of the games will be shown live on RDS2.