Japan pulls off Ford Worlds upset with win over Canada

An historic win by Japan’s Yusuke Morozumi has brought Brad Jacobs and Team Canada back into the pack at the 2013 Ford World Men’s Curling Championship, presented by Booster Juice, in Victoria, B.C. 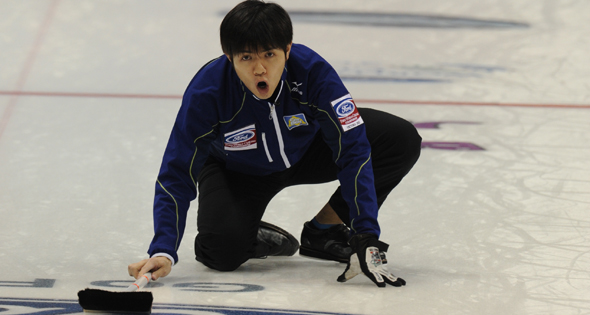 Japanese skip Yusuke Morozumi urges on his sweepers during his win over Team Canada on Wednesday morning. (Photo, CCA/Michael Burns)

Japan, which had never recorded a victory over a Canadian team in five previous attempts at the world men’s championship, scored a pair of three-enders and hung on for a 10-8 extra-end victory over Team Canada in Draw 12 play on Wednesday morning at the Save-On-Foods Memorial Centre. With the loss, Team Canada is now tied for top spot in the 12-team round-robin standings with a 6-2 record with Scotland’s David Murdoch. “I personally curled terrible, horrible — handed them two threes all by myself,” said a disappointed Jacobs, whose team is rounded out by third Ryan Fry, second E.J Harnden, lead Ryan Harnden, alternate Matt Dumontelle and coach Tom Coulterman. “When your skip’s curling like that, you’re not going to win many games. I can’t even believe it went to an extra end. Ah, well, that’s curling sometimes.” Japan was down 2-0 after two ends, but Morozumi took advantage of Jacobs misses to score three in the third end, and added another three in the seventh when Jacobs was tight on his last-rock takeout, giving Morozumi a draw to take a 7-4 lead. Canada was able to force extras with a 10th-end deuce, but Morozumi calmly removed a Canadian shot rock in the 11th for the victory, which improved his team’s record to 3-5. “I’m really, really happy,” said Morozumi. “I was nervous the whole game. Team Canada is definitely the top team in the world, so this definitely makes a difference for Team Japan. I hope that kids who were watching this game in Japan are feeling like they can actually get into the sport and win at the world level.” Canada returns to the ice on Wednesday afternoon (1:30 p.m., all times Pacific, TSN2) against Russia’s Andrey Drozdov, looking to bounce back from the surprising loss. “I’ll probably just hit a punching bag for half an hour,” said Jacobs. “Have something to eat and come back. I mean, it happens. We’ve lost lots of games in our careers. Just have to come back and play better. Absolutely, it’s a humbling game. My Uncle Al (four-time Brier participant Al Harnden) actually said once when I was young that if you’re in curling thinking you’re going to win more (championships) than you lose, you’re crazy. It’s a hard game, it’s a humbling game, and very frustrating, especially when you curl like that.” Scotland joined Canada on top of the standings with an efficient 8-4 win over Norway’s Thomas Ulsrud (4-4), a nice comeback after the Scots’ stunning loss to the U.S. on Tuesday night. “We were very disappointed with the loss last night, considering that we dominated the game,” said Murdoch. “For us, it was just a case of taking some of that anger out this morning. We were pretty frustrated after that game and we thought we’d really need to get up for this game. To put Norway down to four losses was our intention, and to really come out firing — showing that real will to win and showing the form we’re playing, because we’ve been playing really well.” Switzerland’s Sven Michel, meanwhile, picked up a big win, knocking off Denmark’s Rasmus Stjerne 7-4 and ending the Danes’ win streak at five. Switzerland evened out at 4-4 with the win while Denmark dropped to 5-3. “That was a huge win for us,” said Michel. “It was important to have a good start and we scored three in the first end and were comfortable, that was really well played. We knew we had to play very well against these guys. We know them from the juniors, they are the same age as we are. We had to play well and we did it.” In the other morning game on Wednesday, Brady Clark of the U.S. won his third straight, making a delicate tap to score two in the 10th end and beat Finland’s Aku Kauste 7-6. The U.S. improved to 4-4 with the win, while the Finns dropped to 1-7. “It was really big,” said U.S. lead Darren Lehto, who was born in Athabasca, Alta. “We dug ourselves a little bit of a hole. We had a couple games we had a chance to win and didn’t. Our back was up against the wall a little bit. Three wins gets us back; actually medals aren’t even out of the question if we play well. It gets us into a good spot to secure our Olympic spot so we just have to keep playing well. It’s nice to get a little momentum going.” Sweden’s Niklas Edin (5-2), China’s Rui Liu (4-3), the Czech Republic’s Jiří Snitíl (3-4), and Russia (1-6) all had byes in Draw 12. Play at the Ford Worlds resumes on Thursday, with games scheduled for 1:30 p.m. and 7 p.m. For more event information, including rosters and the official draw, and to purchase tickets, go to: www.curling.ca/championships/worlds/. Live scoring and standings are available at: www.curling.ca/scoreboard/?e=12. TSN/RDS, the official broadcast partner of the Canadian Curling Association, will provide live coverage of Canada’s round-robin games, in addition to all playoff games. In French, all of the games will be shown live on RDS2.