Team Canada is back on a winning track at the 2013 Ford World Men’s Curling Championship, presented by Booster Juice. 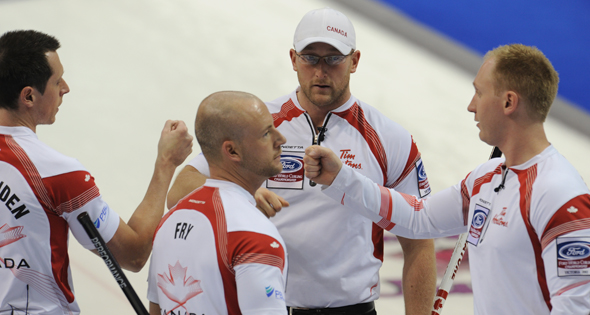 The Brad Jacobs team from Sault Ste. Marie, Ont. — third Ryan Fry, second E.J. Harnden, lead Ryan Harnden, alternate Matt Dumontelle and coach Tom Coulterman — bounced back from a disappointing loss to the Czech Republic on Tuesday morning by handing Norway’s Thomas Ulsrud a 10-7 loss on Draw 11 play on Tuesday night at the Save-On-Foods Memorial Centre in Victoria, B.C. With the win, Team Canada sits alone in top spot with a 6-1 record, clear of a three-way logjam for second place at 5-2 that features Denmark’s Rasmus Stjerne, Scotland’s David Murdoch and Sweden’s Niklas Edin. It was a back-and-forth affair that wasn’t decided until Jacobs took advantage of two misses from the Norwegians — second Christoffer Svae flashed on a takeout and Ulsrud was light on his last-rock draw — in the ninth end to make an open draw to score a decisive three. “We played pretty well that game; it was a little bit of a goofy game with lots of rocks in play and some misses here and there,” said Jacobs. “But at the end of the day, I think we had fewer misses than they did and we came away with the win. It’s nice to split today. I think we would have taken a split today, to be honest with you. But maybe the other way around. But we came out and played well tonight and it feels nice to be at six wins. Still a long way to go.” The Norwegians had picked up a big steal of two in the sixth end when Jacobs was heavy with his last-rock draw, but Canada struck back immediately in the seventh. Fry and Jacobs both made precision draws around a centre guard, and when Ulsrud was too thick on his in-off attempt, Jacobs was left with a routine draw to score three and take a 7-5 lead. Norway tied it with two in the eighth, setting the stage for Canada’s game-turning three in the ninth that eliminated any lingering disappointment from the loss to the Czechs “Oh, we thought about it it. We talked about it and we thought about it a lot,” admitted Jacobs. “I think we were pretty angry about it for quite a few hours after the game, just for not playing as well as we could. But when you come out here and playing against Norway, a really good team who’s been here tons of times, and you’ve got a pretty decent crowd that is really pulling for you to win that game, I think it makes you a little more hungry. That definitely helped us through that game.” Scotland could have been tied with Canada but for a miss from Murdoch with his last shot of the 10th end. Murdoch was heavy and wide with his attempted control-weight takeout, leaving Brady Clark of the U.S. sitting shot rock for the stolen points in an 8-6 victory. It was a two-win day for the U.S., who improved to 3-4. “We had a couple tight games today and stole a win from Scotland,” said Clark, who made a superb draw around a short centre guard to make Murdoch’s last rock even tougher. “I thought they played really well but we just happened to set up a really good end there. They just missed that one but I’m happy to get a couple wins today. That’s real big for us. We needed to do that to build our confidence and feel good. The Danes, meanwhile, were able to stretch their win streak to five by taking down Japan’s Yusuke Morozumi 7-4. Japan dipped to 2-5 with the loss. “It’s starting to feel really good now,” said Stjerne, who’s hoping to be the first Danish skip in the playoffs at the world men’s championship since his dad, Tommy, won a bronze medal in 1990 at Västerås, Sweden. “We’re grooving into a zone now, but there’s still room for improvement however I think we’re really close to reaching our top level. We just need to hang in there now.” In other evening draw play, Switzerland’s Sven Michel kept his fleeting playoff hopes alive with a 7-5 victory over Finland’s Aku Kauste. The Swiss, 3-4 after the victory, took control of the game by scoring three in the fifth end and stealing one more in the sixth. Finland dropped to 1-6 with the loss. “Yes, we knew we had to win tonight and after three losses, we were under pressure. Now we’re happy that we got that win,” said Michel. “Our confidence wasn’t really struggling. We had three good games, we played well, but it was not good enough. Now, it’s good. This helps our confidence, but we have two really important games tomorrow and we’ll keep fighting. Sweden, China’s Rui Liu (4-3), the Czech Republic’s Jiří Snitíl (3-4), and Russia’s Andrey Drozdov (1-6) all had byes in Draw 11. Play at the Ford Worlds resumes on Wednesday, with games are scheduled for 8:30 a.m., 1:30 p.m. and 7 p.m. For more event information, including rosters and the official draw, and to purchase tickets, go to: www.curling.ca/championships/worlds/. Live scoring and standings are available at: www.curling.ca/scoreboard/?e=12. TSN/RDS, the official broadcast partner of the Canadian Curling Association, will provide live coverage of Canada’s round-robin games, in addition to all playoff games. In French, all of the games will be shown live on RDS2.