Team Canada will enjoy a night off at the 2013 Ford World Curling Championship, presented by Booster Juice, thanks to a win over Russia’s Andrey Drozdov on Wednesday afternoon. 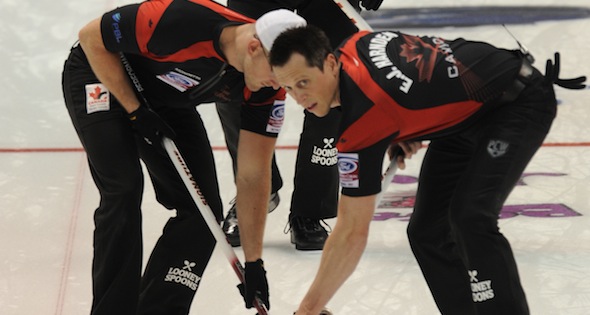 Brad Jacobs’ team from Sault Ste. Marie, Ont. — third Ryan Fry, second E.J. Harnden, lead Ryan Harnden, alternate Matt Dumontelle and coach Tom Coulterman — hung tough for an 8-5 win over the Russians in Draw 13 play at the Save-On-Foods Memorial Centre. With the win, Canada moves back into sole possession of first place in the 12-team round-robin competition, a win clear of Scotland’s David Murdoch (6-2), who had a bye on Wednesday afternoon. “We didn’t have our greatest performances today, in both games, actually,” said Ryan Harnden, who along with his teammates shook off the after-effects of an upset loss to Japan’s Yusuke Morozumi in the morning draw on Wednesday. “The other teams played really well, we have to give them credit. But it’s nice to get away with at least a split and get to 7-and-2, get some rest tonight and get back at it tomorrow.” It didn’t come easy for Canada against the young Russians, who’d tied the game in the eighth end with a steal when Jacobs just missed on a runback double takeout for multiple points. But Canada came back strongly in the ninth and Jacobs made an open draw to the four-foot for the go-ahead deuce, and the Russians couldn’t match it in the 10th. “That could have put the game away (taking two in the eighth), going up three into the ninth end because we’re a good hitting team,” said Harnden. “But we just stuck together. It just seemed like nothing was going right for us in both games today, but we just stuck together for the win. We’ll take a win any way we can get it. Any win right now is big; it might be a logjam, so hopefully we can get the two (wins) tomorrow and avoid that logjam.” In a battle of traditional Scandinavian rivals, meanwhile, Norway’s Thomas Ulsrud snapped a two-game losing streak with a 6-5 extra-end win over Sweden’s Niklas Edin. Ulsrud made an open hit for the victory to raise his team’s record to 5-4, while the Swedes dropped to 5-3. “That was crucial,” said Ulsrud. “As usual for Norway, we’re desperate for wins late in the week. If we lost this one we’d be depending on other teams but now it’s  in our own hands. It was close, it’s always a close game between us and Niklas and the boys from Sweden. We just need to keep it going. On paper we’ve got a pretty good chance, but everybody’s beating everybody, so we’ll see what happens.” In other action, the Czech Republic’s Jiří Snitíl scored a pair of three-enders and hung to beat Finland’s Aku Kauste 9-6. The win lifted the Czechs back to the .500 mark at 4-4, while the Finns remained in the cellar at 1-8. “We’re happy, but I must say it was not an easy win for us,” said Snitíl. “We got a good lead but the Finnish team played well in the second half and they were chasing us big-time. We had a hard time to get out of there.” In the other game, China’s Rui Liu kept his team’s playoff hopes alive with a narrow 5-4 win over Switzerland’s Sven Michel. The Chinese improved to 5-4 while Switzerland dropped to 4-5. “I think we improved from our last several matches — today’s performance was a big improvement,” said Liu. “The difference today was that our teamwork has improved. At first we didn’t co-operate very well with each other, but today we communicated a lot better.” Besides Scotland, Denmark’s Rasmus Stjerne (5-3), Brady Clark of the U.s. (4-4) and Japan’s Yusuke Morozumi (3-5) had the byes in Draw 13. Play at the Ford Worlds resumes on Wednesday, with games scheduled for 7 p.m. On Thursday, the final day of round-robin competition, draws are scheduled for 9 a.m., 2 p.m. and 7 p.m. The top four teams at the end of the round robin will advance to the Page playoffs, which see the first- and second-place teams playing for a berth in Sunday’s gold-medal game (4 p.m.). The loser of the one-two game drops to the semifinal (Saturday, 4 p.m.) against the winner of the Page three-four game. The semifinal loser and Page three-four loser will play for the bronze medal Sunday at 11 a.m. For more event information, including rosters and the official draw, and to purchase tickets, go to: www.curling.ca/championships/worlds/. Live scoring and standings are available at: www.curling.ca/scoreboard/?e=12. TSN/RDS, the official broadcast partner of the Canadian Curling Association, will provide live coverage of Canada’s round-robin games, in addition to all playoff games. In French, all of the games will be shown live on RDS2.