Team Canada still has some work to do to advance to the Page playoff one-two game at the 2013 Ford World Men’s Curling Championship, presented by Booster Juice. 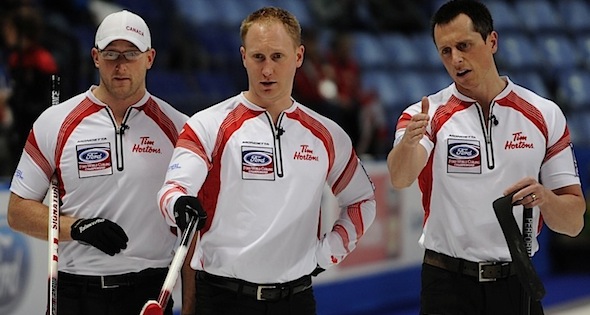 Brad Jacobs’ team from Sault Ste. Marie, Ont. — third Ryan Fry, second E.J. Harnden, lead Ryan Harnden, alternate Matt Dumontelle and coach Tom Coulterman — dropped a 5-3 decision to Denmark’s Rasmus Stjerne on Thursday afternoon at the Save-On-Foods Memorial Centre in Victoria, B.C. The result left Canada with a 7-3 record and needing to beat Sweden’s Niklas Edin (6-4) in their final round-robin game on Thursday at 7 p.m. (all times Pacific). A victory there would land Canada in the Page one-two game on Friday at 7 p.m. against Scotland’s David Murdoch. A loss, and then it’ll come down to various tiebreaking scenarios to determine the rankings for the four-team Page playoffs. “Exactly, it’s in our hands,” said Jacobs. “Just have to curl better, that’s all. I really don’t have a lot to say other than we have to curl better. We are capable. Even that game — I thought we played really well. I thought we did everything we could do to get a steal or a force in the ninth and we ended up giving up two. It was unbelievable.” httpvh://www.youtube.com/watch?v=aOGiFBDeoAo Canada didn’t lack for opportunities against the 7-4 Danes, but repeatedly failed to take advantage of them. Denmark was able to lock up the victory when Stjerne made a wonderful in-off to score two in the ninth end. “We played really well and managed to get the crowd out of the game and that made it fairly even,” said Stjerne, who clinched at least a tiebreaker berth with the win — the first by a Danish team over Canada at the men’s worlds since 2003. “I made the huge shot in the ninth and that pretty much put the game away. After the first few games we’ve picked up the pace and kept it going the rest of the way. Just excited to see how it ends now.” “Nobody was beating that team the way they played,” said Jacobs. “Their skip must have curled a hundred per cent (Stjerne was scored at 95). Obviously, we’ve done that to teams, too. It looks like we’re getting a little taste of our own medicine. I was laughing a lot that game with the shots they were coming up with. It was unbelievable.” Meanwhile, Murdoch, who’d locked up a berth in Friday’s Page playoff one-two game earlier on Thursday, dropped a surprising 10-9 decision to Finland’s Aku Kauste. The Finns (2-8) had opened a 5-2 lead through three ends before giving four back to Scotland (8-3) in the fourth end. But Finland took one in the fifth and stole a stunning three in the sixth when Murdoch missed on a runback takeout to score two. Scotland fought back with single points in the next three ends, but Kauste made a come-around takeout for the win in the 10th. “Oh, it was very exciting,” said a happy Kauste. “I don’t know if I’ve ever been as nervous as I was on the last shot. We’ve been having so many close games and tough losses. This one, we got lucky in the sixth end; David wanted to go for the big shot for two points and he got the worst possible result. We tried to just hang in there and play well, but it was pretty tough.” Switzerland’s Sven Michel helped his country’s chances of booking a spot in the field for the 2014 Winter Olympics with an 8-5 win over Japan’s Yusuke Morozumi. Switzerland evened out at 5-5 with the victory, still with an outside hope of playing in a playoff tiebreaker. The Japanese finished with a 3-8 record. “I think it was really important to be up early, that way we could control the game and start to play a little defensive, so it was really important for us,” said Michel, whose team took a 5-2 lead after three ends. “Close to the end of the game we were a little bit nervous and started to make a couple of small mistakes and I made a mistake with our first one so I knew I had to play well for my last shot. I did and I was very happy about it.” In the other Thursday afternoon game, U.S. skip Brady Clark scored three in the first end and stole two more in the second and hung on for a 9-7 win over Norway’s Thomas Ulsrud. The U.S. finished the Ford Worlds with a 5-6 record, while Norway levelled out at 5-5. “It was a huge win,” said Clark. “We needed to win that game and finish with a win and get a little bit of confidence. This week didn’t quite go our way. We definitely had a learning experience and look forward to a lot of things we can work on moving forward.” Sweden, the Czech Republic’s Jiří Snitíl (6-4), China’s Rui Liu (5-5) Russia’s Andrey Drozdov (3-7) all had byes in Draw 16. The Page three-four playoff game is Saturday at 11 a.m. The loser of the one-two game drops to the semifinal (Saturday, 4 p.m.) against the winner of the Page three-four game. The semifinal loser and Page three-four loser will play for the bronze medal Sunday at 11 a.m. For more event information, including rosters and the official draw, and to purchase tickets, go to: www.curling.ca/championships/worlds/. Live scoring and standings are available at: www.curling.ca/scoreboard/?e=12. TSN/RDS, the official broadcast partner of the Canadian Curling Association, will provide live coverage of Canada’s round-robin games, in addition to all playoff games. In French, all of the games will be shown live on RDS2.