David Murdoch threw the shot, but his sweepers Scott Andrews and Greg Drummond should be the ones taking the bow for lifting Scotland into a first-place tie at the 2013 Ford World Men’s Curling Championship, presented by Booster Juice. 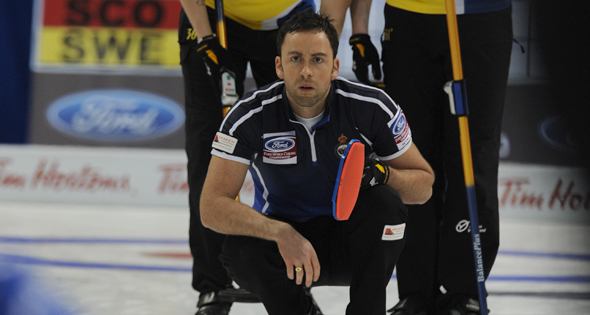 Scottish skip David Murdoch checks out the situation during his team’s win over Sweden on Wednesday night. (Photo, CCA/Michael Burns)

The Scottish skip made a draw to the full eight-foot for the winning point in an 8-7 triumph over Sweden’s Niklas Edin on Thursday night at the Save-On-Foods Memorial Centre in Victoria, B.C., but were it not for the sweeping efforts of Andrews and Drummond, it would have been the Swedes celebrating the victory. Instead, the rock was dragged far enough, and the Scots will head into Thursday, the final day of round-robin play, tied with Canada’s Brad Jacobs for top spot in the 12-team round-robin standings with 7-2 records. “It’s nice to know you have sweepers like that,” said Murdoch. “That’s where all the hard work in the gym pays off, things like that. The ice was just a little slower tonight, and even in that last end, it went down a little more and it caught us a hair.” Sweden finds itself on the playoff bubble with a 5-4 record. Scotland, meanwhile, would lock up a berth in the Page playoff one-two game with two wins on Thursday — Scotland finishes off with games against China’s Rui Liu (5-4) and Finland’s Aku Kauste (1-8). Canada (which had the bye on Wednesday night) plays Denmark’s Rasmus Stjerne (6-3) and Sweden on Thursday. “We’re very happy,” said Murdoch. “We have the one-two game in our own hands, and that’s great. That’s what we really tried to achieve all week. We have a couple tough games (on Thursday) and we need to win both of those to make the one-two, but if we do that, we’ll meet our goal for the round robin and then we’re into the hard part of the weekend.” Denmark, meanwhile, improved its hopes for a first playoff berth in 23 years at the world men’s championship with a 7-6  extra-end victory over China. Denmark held a 6-2 lead after six ends but China scored single points in each of the next four ends to force the extra end, before Denmark finally secured the victory, which resulted in sole possession of third place. “They are a good team and played really very well and he just kept putting the pressure on,” said Stjerne, whose father Tommy (who’s in attendance this week in Victoria) was the most recent Danish skip to make the playoffs, winning a bronze medal in 1990 at Västerås, Sweden. “I thought I would give myself a shot  in every end, but eventually it was just saving shots, rather than going for shot-rock.  But I am so glad my team made it possible for a four-foot draw in the final end.” Behind Denmark, four teams — China, Sweden, the Czech Republic’s Jiří Snitíl and Norway’s Thomas Ulsrud — are tied for the fourth and final playoff position at 5-4. The Czechs moved into potential playoff position by grinding out a 9-8 win over Brady Clark of the U.S., snapping a three-game win streak for the Seattle team (4-5), which needs help on Thursday to reach the playoffs. “We feel better than last year, for sure,” said Snitíl, who finished in the cellar in the 2012 World Men’s Championship with a 2-9 record at Basel, Switzerland. “We just have to relax tonight and be ready tomorrow. We’ve been in this situation at the Europeans before so we’re kind of used to it. Hopefully we won’t be looking around and are able to just concentrate on our own game.” In the other Draw 14 game, Russia’s Andrey Drozdov (2-7) pulled out a 6-5 win over Japan’s Yusuke Morozumi (3-8). Morozumi had a chance to force an extra end but was short on his last-rock draw that needed only to touch the paint. Canada, Norway, Finland and Switzerland’s Sven Michel (4-5) had byes in Draw 14. Play at the Ford Worlds resumes on Thursday, when draws are scheduled for 9 a.m., 2 p.m. and 7 p.m. The top four teams at the end of the round robin will advance to the Page playoffs, which see the first- and second-place teams playing for a berth in Sunday’s gold-medal game (4 p.m.). The loser of the one-two game drops to the semifinal (Saturday, 4 p.m.) against the winner of the Page three-four game. The semifinal loser and Page three-four loser will play for the bronze medal Sunday at 11 a.m. For more event information, including rosters and the official draw, and to purchase tickets, go to: www.curling.ca/championships/worlds/. Live scoring and standings are available at: www.curling.ca/scoreboard/?e=12. TSN/RDS, the official broadcast partner of the Canadian Curling Association, will provide live coverage of Canada’s round-robin games, in addition to all playoff games. In French, all of the games will be shown live on RDS2.