It’s one down and two more to go for Team Canada at the 2013 Ford World Men’s Curling Championship, presented by Booster Juice. 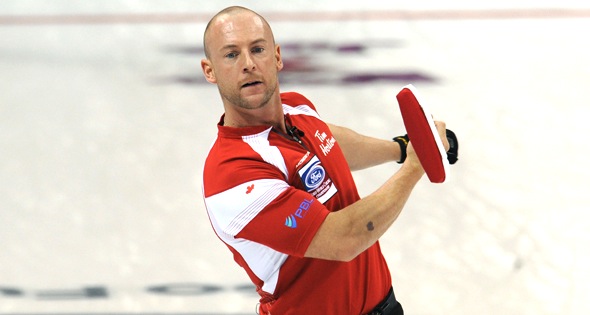 Team Canada third Ryan Fry tries a little body English to get a Danish rock out of the rings during his team’s playoff win on Saturday. (Photo, CCA/Michael Burns)

Brad Jacobs and his team from Sault Ste. Marie, Ont., broke out of some recent struggles with a solid 8-6 win over Denmark’s Rasmus Stjerne in the Page playoff three-four game on Saturday afternoon at the Save-On-Foods Memorial Centre in Victoria, B.C. With the victory, Jacobs, third Ryan Fry, second E.J. Harnden, lead Ryan Harnden, alternate Matt Dumontelle and coach Tom Coulterman advance to the semifinal on Saturday at 4 p.m. (all times Pacific) against Scotland’s David Murdoch. The semifinal winner will advance to Sunday’s gold-medal game at 4 p.m. against Sweden’s Niklas Edin, while the loser will play Denmark for the bronze medal on Sunday at 11 a.m. “We went out and played really well, which is what we needed to do,” said Jacobs, who avenged a 5-3 loss to Denmark on Thursday morning. “Denmark is really tough and they make a lot of shots. It was just an all-around fun game. The full day off yesterday really helped us out. I think that was the biggest reason why we were able to come out here so refreshed and so hungry today. We played awesome.” The Canadians were a confident team from the first end onward. They forced Stjerne to draw for a single point in the first end, then took a go-ahead deuce in the second, thanks to a precise come-around draw from Jacobs with his first stone. Canada caught a break in the third when Stjerne had a tap to score three but was wide and rolled his shooter too far and had to settle for two. Jacobs then took over. He made a tough double takeout to blank the fifth, then made a angle-raise double takeout to score two in the sixth and retake the lead. Denmark tied it with one in the seventh and the teams traded deuces before the 10th end, which turned on a roof-raising raise triple takeout from Fry that left Stjerne with little in the way of options to manufacture a game-winning steal. Jacobs didn’t need to throw his last rock. Fry was scored at 95 per cent to lead the Canadians, who shot 91 as a team. “We didn’t come up with the really big key shots, and they made some huge shots in the last end to score a deuce,” said Stjerne. “We couldn’t get away with the forces this time, and coming down in the 10th, it’s not easy against Canada and Ryan kills the game with that triple and there’s basically no shot left for me. They were more into it today, and you know Canadians will step it up in the playoffs. We tried to do the same, but we had some key misses and that’s what hurt us in the end.” The Victoria crowd was lively well before game time. Team Canada was greeted by a loud ovation as the players took their first slides for the pre-game practice. “That was super cool,” said Jacobs. “As soon as we stepped on the ice for practice, people were cheering and clapping and there moments out there where we made some nice shots and the crowd just went crazy. And when Fry made that shot in 10, that was the loudest cheer we’ve ever had for our team. It gave us all chills, and when you hear that, you really want to close the game out for the crowd.” For more event information, including rosters and the official draw, and to purchase tickets, go to: www.curling.ca/championships/worlds/. Live scoring and standings are available at: www.curling.ca/scoreboard/?e=12. TSN/RDS, the official broadcast partner of the Canadian Curling Association, will provide live coverage of Canada’s round-robin games, in addition to all playoff games. In French, all of the games will be shown live on RDS2.