Scotland ran its podium streak at the Ford World Men’s Curling Championship, presented by Booster Juice, to six straight years on Sunday at the Save-On-Foods Memorial Centre in Victoria, B.C. 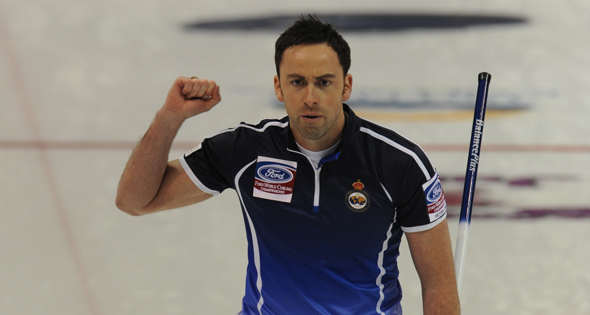 David Murdoch and his Scottish teammates — third Tom Brewster, second Scott Andrews, lead Michael Goodfellow, alternate Greg Drummond and coach Soren Gran — defeated Denmark’s Rasmus Stjerne 7-6 in the bronze-medal game on Sunday. In the six-year run, Scotland has won a gold, three silver and a bronze medal, and Sunday’s bronze was the 33rd medal won by a Scottish team at the world men’s championship, second only to the 49 won by Canada (a total that includes the silver or gold medal Canada will take from this event). Canada’s Brad Jacobs will play Sweden’s Niklas Edin for the gold medal at 4 p.m. PDT. It was a good bounceback for Scotland, which had two chances to reach the gold-medal game but lost in both games — on Friday night to Sweden in the Page playoff one-two and on Saturday to Canada in the semifinal. “It’s kind of disappointing not getting to the final — we had that chance but we didn’t grasp it,” said Murdoch, who fell short in his bid to win a third world championship. “But today we were really fired up to come out and win that medal. We wanted to make sure we went home with a medal and it’s just rewards for such a good week.” Scotland never trailed on Sunday, scoring a deuce in the first end and another in the sixth. The Danes were able to tie the game with two in the fifth and two more in the seventh, but could never take the lead. The Scots put the game away with three in the eighth end when Stjerne rubbed on a come-around attempt, giving Murdoch an open hit to score the three. The Danes fought back in the ninth when Stjerne made a wonderful raise triple takeout to score two and cut the Scottish margin to one, but couldn’t manufacture the steal in the 10th. “I think we’re really happy,” said Murdoch. “It’s the world championships before the Olympics and you tend to find that the best teams are here and they’re starting to the top of their game. The fact that we can top the round-robin and shoot some really good numbers shows that we’re doing a lot of things right. We’re going to take a lot of encouragement that we’re doing the right things and we know that when we bring our ‘A’ game we can beat anyone. We just need to be a bit more consistent.” It was also a promising result for Denmark, which hadn’t made the world men’s championship playoffs since 1990 when Stjerne’s dad Tommy won a bronze medal at Västerås, Sweden. “You can definitely tell these games are different from the ones in the round robin,” admitted Rasmus Stjerne. “You just have to take the learning from this. It’s really the same curling; you just have to get the mindset right. We were off today, and it’s been a long week. But you’re right — when we go back home, I think we’ll be pleased with what we’ve done here.” For more event information, including rosters and the official draw, go to: www.curling.ca/championships/worlds/. Live scoring and standings are available at: www.curling.ca/scoreboard/?e=12. TSN/RDS, the official broadcast partner of the Canadian Curling Association, will provide live coverage of Canada’s round-robin games, in addition to all playoff games. In French, all of the games will be shown live on RDS2. Next year’s world men’s championship will be played in Beijing. The 2014 Ford World Women’s Curling Championship is scheduled for March 15 to 23 in Saint John, N.B. To purchase tickets, go to: www.curling.ca/2014worlds/.