Canada’s men’s team got off to a winning start on Saturday morning at the World Seniors Curling Championships at the Grant-Harvey Centre in Fredericton, N.B. 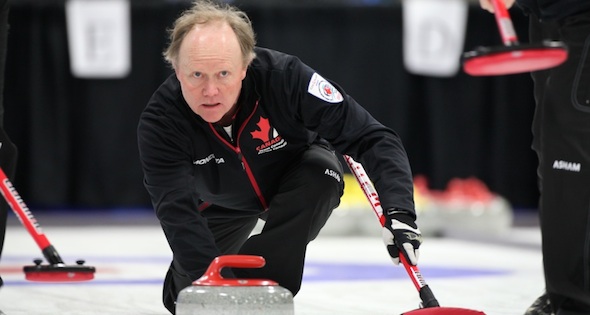 Rob Armitage and his team from Red Deer, Alta. — third Keith Glover, second Randy Ponich, lead Wilf Edgar, alternate Lyle Treiber and coach Bill Tschirhart — cruised to a 10-0 victory over Germany’s Klaus Unterstab in the opening draw of the 50-and-over world championship. The world seniors are being staged jointly with the 2013 World Mixed Doubles Championship. Armitage’s Canadians were never threatened on Saturday. After missing a shot for two in the first when he rolled out on an open hit, Armitage stole two in the second when Unterstab was wide and heavy on a tough draw. That set the tone for the game. “They weren’t used to that kind of draw weight, and, of course, we are, and you could see it right away,” said Armitage. “It was a good start for us, but we have Finland this afternoon so that’ll be a good test for us.” It’s the first time Armitage and his teammates have represented Canada internationally, and while they are rookies, Armitage admitted there are always high expectations of Canadian teams. “There is some pressure wearing the Maple Leaf, and there are some good teams here,” said Armitage. “The fact that Canada has won this seven of the 11 years and all that, you think about it. There’s no way around it. It’s a world curling event and you don’t want to go out and stink it up for your country, that’s for sure.” All three of Canada’s teams in Fredericton will be in action later this afternoon. In seniors play at 4 p.m. (all times Atlantic), Armitage’s men’s team plays Finland’s Kari Keränen, while Cathy King’s Canadian women’s team from St. Albert, Alta. (third Carolyn Morris, second Lesley McEwan, lead Doreen Gares, alternate Christine Jurgenson, coach Bill Tschirhart) plays Ireland’s Mary O’Kane. In the mixed doubles competiion, the Canadian pairing from Sagueuay, Que., of Robert Desjardins and Isabelle Néron makes its debut at 4:30 p.m. against Italy’s Alessio Gonin and Giorgia Ricca. Meanwhile, there will be a Canadian connection to the Spanish mixed doubles team of Sergio Vez Labrador and Iratzu Garcia Vez. The team has named News Brunswick’s Rebecca Atkinson as its coach for the world championship. Atkinson played for New Brunswick at the past two Scotties Tournament of Hearts Canadian women’s curling championships. For live scores and standings from the World Mixed Doubles Championship, go to: www.wmdcc2013.curlingevents.com/. For live scores and standings from the World Seniors Championship, go to: wscc2013.curlingevents.com/.