There was an all-Canadian matchup on Sunday at the World Mixed Doubles Curling Championship in Fredericton, N.B. in which not a single stone was delivered by a Canadian. 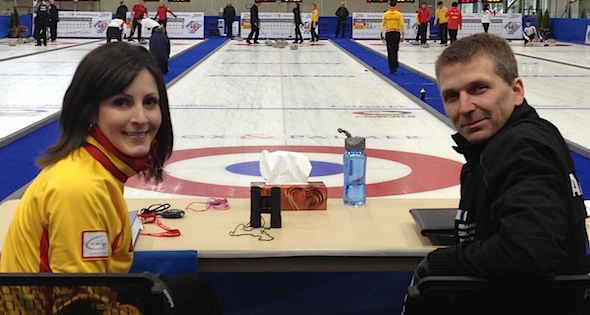 When Spain took on Romania on Sunday at the Grant-Harvey Centre, it was the coaching matchup that might have been more intriguing to local curling fans. The Spanish duo of cousins Sergio Vez and Irantzu Garcia was being coached by two-time New Brunswick women’s champion Rebecca Atkinson of Saint John. The Romanian duo of Valentin Anghelinei and Ana-Maria Saracu was being coached by two-time New Brunswick junior men’s champ Tim Comeau of Fredericton. It was Atkinson who ended up with the upper hand in a 13-4 win by Spain. Ironically, as of three days ago, neither Atkinson or Comeau had planned to be at the Grant-Harvey Centre in any capacity other than as fans. “I was planning on being around this week anyways because my law firm, Cox & Palmer, is the presenting sponsor,” said Atkinson, a lawyer. “So I was here on Friday night to help welcome the teams, say hello, and hopefully get to meet a few of them. The team from Spain was telling us that they hadn’t brought a coach this year. They’ve been to the worlds a few times but they weren’t able to bring a coach this year, and they asked if I could do it.” Comeau is a coach already; he coaches a team featuring his daughters 14-year-old Justine at skip and 13-year-old Brigitte at lead, a team that won the New Brunswick Under-18 title this season in addition to winning the Under-15 provincial titles the previous two years. But his hiring as the Romanian coach came out of the blue on Friday. “I got an email from the organizing committee asking if I could coach them and I replied that I know nothing about mixed doubles and I don’t speak Romanian, so I didn’t know how I could help,” said Comeau with a laugh. “But then I found out they speak English and they’re pretty new to the sport. They just wanted somebody to be there with them to help out. I own my own business so my schedule was pretty flexible. I coach my girls in curling, and eventually they’ll get to nationals. They’ve already done well at their age level, so being exposed to this might help down the road.” Comeau was relieved to find out he wouldn’t need to learn a second language in a hurry. “Have I learned any Romanian? No,” said Comeau with a laugh. “Will I learn any Romanian? No.” After the win over Romania, Vez was quick to give credit to the team’s new coach. “She’s a really good coach,”  said Vez. “We weren’t expecting to have a coach because we didn’t have the money to pay one. She’s really positive and she’s teaching us many things to know during the game and after the game and I think this victory is thanks to Rebecca because she told us to be really positive during the game and have the draw weight.” They’re not the only Canadian coaches working with non-Canadian teams here. The defending world champion team of Martin Rios and Nadine Lehmann is being coached for the second straight year by Al Moore of British Columbia. “It’s a really interesting experience to be here,” said Atkinson. “They’re here on their own; I just want to give them some support, and from my own perspective, it’s just really amazing to be involved in a world championship.”