The playoffs are still a few days away, but Cathy King and Team Canada are already casting a large shadow on the playoff bracket at the World Seniors Curling Championships in Fredericton, N.B. 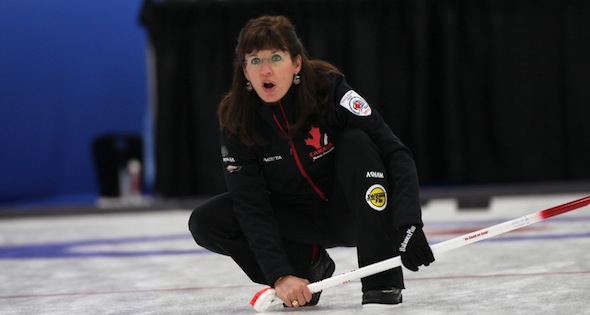 Cathy King calls out instructions to her sweepers during Tuesday’s win over Finland at the 2013 World Seniors. (Photo, WCF/Richard Gray)

King’s team from St. Albert, Alta., improved to 4-0 on Tuesday at the Grant-Harvey Centre, rolling to a 19-1 win over New Zealand’s Liz Matthews. The win left King, third Carolyn Morris, second Lesley McEwan, lead Doreen Gares, alternate Christine Jurgenson and coach Bill Tschirhart alone on top of their seven-team round-robin pool. Austria’s Veronika Huber and Winnipeg-born Margie Smith of the United States have 2-1 records. The victory was the 44th in succession by a Canadian team at the World Senior Women’s Championship, dating back to the 2008 event at Vierumäki, Finland. Diane Foster’s Canadian team would rebound to win the world title that year, the first of five in a row — a streak King’s team is trying to extend here. Canada opened up an early lead on the Kiwis by scoring three in the first end, stealing five in the second and three more in the third. The handshakes came after six ends when Canada stole six more. After outscoring opponents 59-7 over their first four games, the Canadians say that while they’re ready for a stiffer test, they won’t change their approach on the ice. “We’re ready for a tough game, yes,” said McEwan. “But, you know, we just try to treat it like it’s a close game. We don’t even look at the scoreboard. Our coach has us playing like it’s a golf course — you just worry about your ice, your rocks. It doesn’t matter what they’re doing. Our big thing was that we were going to take it one rock at a time, regardless of the score. Not that we think less of them, but we’ve been watching some games and the scouting has helped us.” King, Morris and Jurgenson all have international experience, while McEwan and Gares are rookies at world-level play. But McEwan said she’s not surprised the team has looked so comfortable three days into the World Seniors. “We’ve worked hard at the whole team dynamics thing and expectations, and I’ve done a lot of coaching over the years, and that has helped me, too,” she said. “But I’m not surprised at all; we’ve worked hard for this for 13 months.” The Canadian women have the day off on Wednesday and return to action on Thursday at 3:30 p.m. (all times Atlantic) against Austria. Rob Armitage’s unbeaten Canadian men’s team (third Keith Glover, second Randy Ponich, lead Wilf Edgar and alternate Lyle Treiber; Tschirhart is coaching both Canadian senior teams) is on the ice later Tuesday with a 7 p.m. assignment against  Russia’s Sergey Korolenko (0-4). On Wednesday, Team Canada plays Denmark’s Bent Juul Kristoffersen (1-1) at 7 p.m. In the 2013 World Mixed Doubles championship, which is being held in conjunction with the World Seniors, the Canadian duo of Robert Desjardins and Isabelle Néron of Saguenay, Que., and coach Jim Waite (2-2) return to action late Tuesday with a 9 p.m. game against Hungary’s Zsolt Kiss and Dorottya Palancsa (2-1). Wednesday, Team Canada plays Russia’s Alexey Kamnev and Yana Nekrasova at 4 p.m. For live scores and standings from the World Mixed Doubles Championship, go to: www.wmdcc2013.curlingevents.com/. Selected games from the World Mixed Doubles can be watched online at: www.youtube.com/WorldCurlingTV. For live scores and standings from the World Seniors Championship, go to: wscc2013.curlingevents.com/.