Curling wraps up 2012-13 season with big audiences on TSN

(Source: TSN) With the final audience data of the season now in, the numbers show that curling is one of the most-watched sports properties on Canadian television. Overall, more than 13.7 million Canadians, or close to half the population, have tuned in to watch some of TSN’s extensive curling coverage this season. 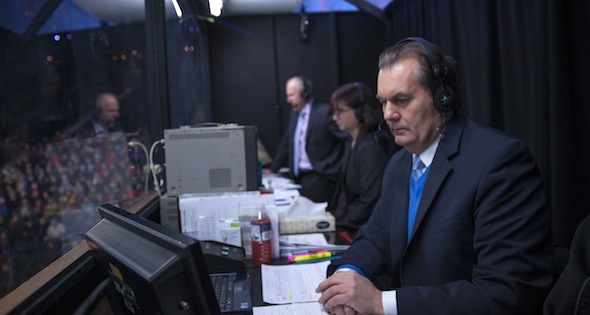 As official broadcaster of the Canadian Curling Association, TSN broadcasts close to 300 hours of live Season of Champions curling each year, including the Tim Hortons Brier and Scotties Tournament of Hearts, along with the Men’s and Women’s World Championships, Capital One Canada Cup, WFG Continental Cup, and M&M Canadian Juniors. Throughout TSN’s live curling coverage in primetime the network attracted an average audience of 561,000 viewers – making it one of the network’s most popular sports properties. TSN wrapped up its exclusive Season of Champions coverage with its most-watched draw of the year, attracting an average audience of 1.13 million viewers for the 2013 Ford World Men’s Championship Final on Sunday, April 7. “Curling is a cornerstone of the TSN schedule and it consistently ranks as one of most-watched sports on TSN every year,” said Stewart Johnston, President, TSN. “We are exceptionally proud of our curling coverage and are thrilled to have such a broad and dedicated audience turn to us time and time again – at all hours of the day – for the biggest events in curling.” “This is yet another sign of the passion that curling fans have for this sport,” said Greg Stremlaw, Chief Executive Officer of the Canadian Curling Association. “Our long-term partnership with TSN, which we renewed this season, has taken curling to new heights and we look forward to continued growth down the road.” Snapshot of Season of Champions Curling on TSN during 2012-13 season: TSN’s top five audiences from the 2012-13 curling season are as follows: (Source: BBM Canada) TSN’s curling coverage is led by the esteemed broadcast team of Vic Rauter, Olympic gold medallist Linda Moore, and two-time Brier champion and Olympic gold medallist, Russ Howard. As announced last week, Howard will be inducted to Canada’s Sports Hall of Fame – one of our country’s highest sporting honours – for his illustrious curling career. About TSN TSN is Canada’s Sports Leader and #1 specialty network. With a broad portfolio of multimedia sports assets, TSN delivers world-class content across industry-leading platforms including TSN2, TSN Digital, TSN Radio and TSN Mobile TV. Official broadcaster of the Grey Cup, IIHF World Junior Championship and FIFA Women’s World Cup Canada 2015, TSN’s slate of live sports coverage includes NHL, CFL, NFL, NBA, MLS, Season of Champions Curling, UEFA Euro 2016, MLB Sunday Night Baseball, Barclays Premier League, Golf’s Majors, NASCAR Sprint Cup, Nationwide and Canadian Tire Series, F1, Grand Slam Tennis, NCAA March Madness, and Skate Canada events. TSN is a division of Bell Media, which is owned by BCE Inc. (TSX, NYSE: BCE), Canada’s largest communications company.

About the Canadian Curling Association The Canadian Curling Association (CCA) is the national sport governing body responsible for the development, promotion and organization of curling in Canada. In cooperation with its Provincial and Territorial Member Associations from across Canada, the CCA provides programs and services to curlers ranging from the youngest ‘little rocker’ (age 7 and up), to those participating at ages 70 and over – and from aspiring Olympians to Canadians with special needs, coaches, curling facility operators, ice makers and officials. The CCA also oversees and provides the comprehensive management of the Season of Champions event portfolio; develops and administers the Canadian Team Ranking System (CTRS) for Olympic qualification; and organizes and operates the championship system for Juniors (under 20), Seniors (over 50), Mixed, Women, Men, University and Wheelchair.