Canada’s hopes for a three-medal performance at the 2013 World Seniors and World Mixed Doubles Curling Championships took a significant step forward on Thursday in Fredericton, N.B. 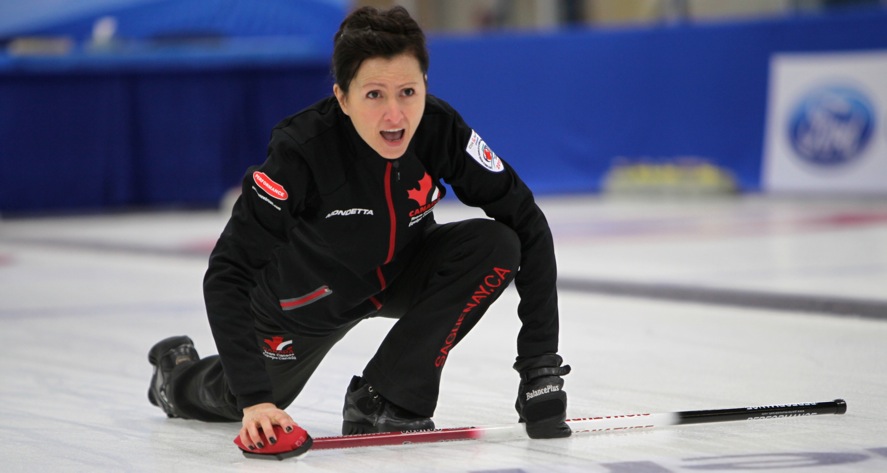 After some early struggles, Canada’s mixed doubles team of Robert Desjardins and Isabelle Néron of Saguenay, Que., moved to within a victory of locking up a tiebreaker berth with an 11-3 win over South Korea’s Jae-Sung Ahn and Hyun-Ho Synn.

Meanwhile, in the World Seniors, Rob Armitage’s Canadian team from Red Deer, Alta. (third Keith Glover, second Randy Ponich, lead Wilf Edgar, alternate Lyle Treiber and coach Bill Tschirhart) won a showdown of unbeaten teams, 5-2 over Sweden’s Karl Nordlund to lock up a berth in Saturday’s semifinals. Later Thursday, Cathy King’s Canadian women’s team from the Saville Centre in Edmonton — third Carolyn Morris, second Lesley McEwan, lead Doreen Gares and alternate Christine Jurgenson (Tschirhart is coaching both senior Canadian teams) — can lock up first place and a spot in the semifinals with a victory over Austria’s Veronika Huber (3-1) at 3:30 p.m. (all times Atlantic). In the mixed doubles, Desjardins, Néron and coach Jim Waite take on China’s Yanlong Ma and Xinna Yu (3-4) at 9 p.m. (all times Atlantic) on Thursday. A win there would set up a third-place tiebreaker with the Russian duo of Alexey Kamnev and Yana Nekrasova (5-3) on Friday morning. The Canada-China game will be broadcast live online at www.youtube.com/WorldCurlingTV. Against the South Koreans, Canada set the tone early, taking four in the first end, and then scoring back-to-back deuces in the fifth and sixth ends. “We’ve been raising our game, and we’re getting a few breaks, too,” said Desjardins. “Some of the games, we weren’t playing very well but we weren’t getting any breaks, either. When you make half-shots and the opponent makes perfect shots, there’s no way you’ll win. Now we’re making great shots and the opponents are making half-shots.” “We’re more confident than we were in the first part of the week,” added Néron. “Our draw weight is better now, and we’re throwing better now. I went to a club with Jim yesterday and worked on my throwing. It helped a lot.” The top two teams from each of the three pools move on to the playoffs, along with the next best third-place team based on Last Shot Draw distance (the pre-game draw to the button to determine last rock in the first end). The other two third-place teams will play off for the for remaining quarter-final position. With Canada holding the lead in the Last Shot Draw standings, wins over China and Russia would likely secure a quarter-final berth. But beating China is the top priority. “If we win, we’re playing tomorrow. And that’s all we can ask,” said Desjardins. “We’re playing well now. Beat China and then the Russians — as long as we’re playing teams East of Europe, we’ll be OK. And then we’ll find a way to beat a Western Europe or Central Europe team at least once.” In the men’s game, Canada won its seventh straight and knocked the Swedes (8-1) from the ranks of the unbeaten. “We played well, and that’s exactly what I wanted to see happen out there,” said Armitage. “It kind of reminds me of Abbotsford (B.C., where Armitage’s team won the 2012 Canadian senior men’s title to earn the right to play in the 2013 World Seniors). “By mid-week we really had it rolling and we were well-adjusted to the ice.” Canada closes out round-robin play on Friday against Wim Neeleman of the Netherlands (3-5) at 8:30 a.m. and Gert Messing of the United States (3-4) at 3:30 p.m. A victory in either of those games would give first place to Canada. “I’ve always said we wanted to run the table here,” said Armitage. “But we still haven’t clinched first. If we can win one more to finish first, that will give us hammer in the semifinal. And the big thing then is to get into that gold-medal game. The hammer is big for us; we’re pretty good front-runners.” For live scores and standings from the World Mixed Doubles Championship, go to: www.wmdcc2013.curlingevents.com/. Selected games, including the playoff round, from the World Mixed Doubles can be watched online at: www.youtube.com/WorldCurlingTV. For live scores and standings from the World Seniors Championship, go to: wscc2013.curlingevents.com/.