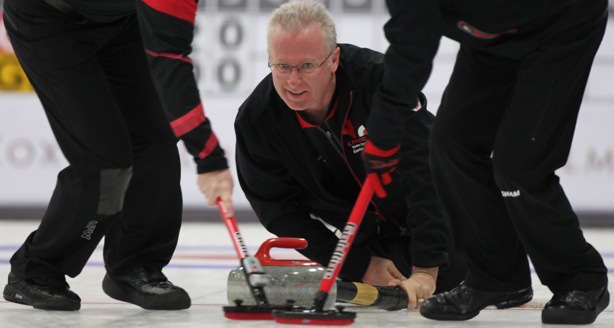 Randy Ponich and his Canadian teammates are two wins away from gold at the 2013 World Senior Curling Championships. (Photo, WCF/Richard Gray)

A few hours after Cathy King’s women’s team completed a 6-0 run through its round-robin schedule, fellow Albertan Rob Armitage finished off his round-robin slate with an 7-5 win over Gert Messing of the United States on Friday afternoon at the Grant-Harvey Centre. With the victory, Armitage and his Red Deer, Alta., squad — third Keith Glover, second Randy Ponich, lead Wilf Edgar, alternate Lyle Treiber (who saw action in the win over the U.S.) and coach Bill Tschirhart — finish first in their round-robin pool with a 9-0 record. That sets up a semifinal assignment Saturday at 8 a.m. (all times Atlantic) against Switzerland’s Werner Attinger, the 1984 world men’s championship silver-medallist. The Swiss finished second in the other round-robin pool with a 7-2 record. “That’s where we wanted to be,” said Armitage, who earlier on Friday defeated Wim Neeleman of the Netherlands 8-2. “A 9-and-0 record doesn’t give us the hammer (teams will draw to the button for hammer before each playoff game), but fair enough. We’re playing well enough to overcome that.” Canada broke open a tight game with back-to-back deuces in the fifth and sixth ends. The U.S. finished with a 4-5 record. Canada will be trying to win an eighth men’s gold medal in the 12-year history of the World Senior Championships. New Zealand’s Hans Frauenlob (8-1) will play Sweden’s Karl Nordlund in the other semifinal. “You wish you had the Page (playoff system, guaranteeing the first-place team two cracks at reaching the final),” said Armitage. “Semifinals can be scary because you’re in a one-game shot. You just have to realize that. If we win, we win. If we lose, we have to go to the bronze-medal game and win that. But anybody can be beat. It’s a one-game deal. It’s curling; one bad break and you get down a few, and the other team makes the right shots and they’re tough to come back against.” King’s team from the Saville Centre in Edmonton was a 6-4 winner over Margie Smith of the United States earlier on Friday to extend Canada’s World Senior Women’s win streak to 49, dating back to the 2008 World Seniors in Vierumäki, Finland. Canada takes on two-time world senior women’s champion Ingrid Meldahl of Sweden (5-1) in one semifinal at 8 a.m., while the other semi will feature Scotland’s Christine Cannon (6-0) against the winner of a late Friday tiebreaker between Austria’s Veronika Huber and Japan’s Mikiko Tsuchiya, who both finished with 4-2 records. Canada has won the past five world senior women’s titles, and eight of the 11 that have been contested. The men’s and women’s gold- and bronze-medal games are scheduled for 2 p.m. on Saturday. One of the gold-medal games will be shown live online at www.youtube.com/WorldCurlingTV. Meanwhile, in the 2013 World Mixed Doubles Championship, which is being staged jointly with the World Seniors, the matchups are now set for the 6 p.m. quarter-final round. Defending world champions Martin Rios and Nadine Lehmann of Switzerland (8-0) will play Norway’s Magnus Nedregotten and Kristin Skaslien (6-2); Scotland’s Bruce Mouat and Gina Aitken (6-2) will take on Sweden’s Fredrik Hallström and Elisabeth Norredahl (6-2); 2012 bronze-medallists Christian Roth and Claudia Toth of Austria (7-1) will play Hungary’s Zsolt Kiss and Dorottya Palancsa (7-1); and New Zealand’s Frauenlob (who’s pulling double duty here this week) and Natalie Campbell (7-1) will be up against Tomas Paul and Zuzana Hajkova. The semifinals are set for Saturday at 11 a.m., with the gold- and bronze-medal games at 5 p.m. Canada’s Robert Desjardins and Isabelle Néron of Saguenay, Que., along with coach Jim Waite, didn’t make the playoff round. For live scores and standings from the World Seniors Championship, go to: www.wscc2013.curlingevents.com/. For live scores and standings from the World Mixed Doubles Championship, go to: www.wmdcc2013.curlingevents.com/. The playoff round from the World Mixed Doubles can be watched online at: www.youtube.com/WorldCurlingTV. -30- For more information: Al Cameron Director, Communication & Media Relations Canadian Curling Association (403) 463-5500 [email protected] www.curling.ca https://twitter.com/alcameroncca Joanna Kelly & Danny Parker WCF Media Relations [email protected] Tel: +372 592 442 35 Chris Jenkins, Media and Security Committee Chair, Fredericton Organizing Committee 506-461-1225 [email protected]