The Optimist International U-18 Curling Championships is Canada’s premier youth event for players under 18 years of age. The event features 12 top men’s and 12 top women’s teams under 18 from Canada, the United States and Japan. The competition, held annually since 2001, was played March 27-31 this year in Langley, B.C. Al Kersey, the visionary behind the Optimist International U-18 Curling Championships, explains that he started the event with the intent to fill the void. “The [idea of the] event evolved for me when my son’s team won the B.C. Pacific Coast Regional Championship in 1991 and could go no further as no further competition existed,” said Kersey. 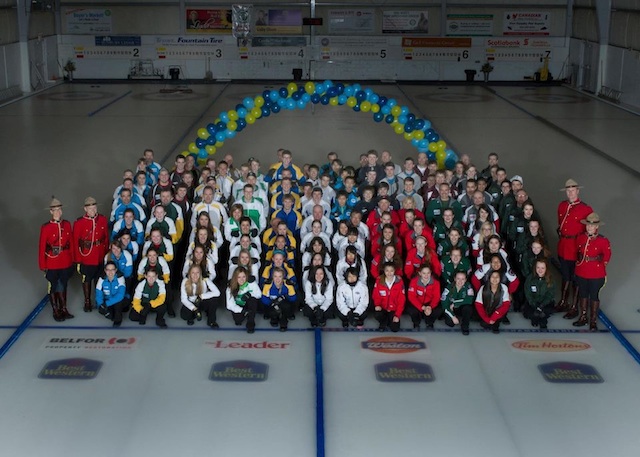 Optimist International has played a large role in the Championships as the title sponsor, not only donating money, but also the members’ time in volunteering. “We have thought since inception that a service organization sponsorship would be a good fit and I have dedicated 11 years to demonstrating that Optimist International should be the service organization of choice,” says Kersey, an Optimist member himself. “Their slogan of ‘Bringing out the Best in Kids’ fits perfectly.” Not only do the Championships have the element of competition, but they also encourage player development. As part of the tournament, teams participate in a development session in which they have the opportunity to learn from some of the best coaches in Canada. Andrea Ronnebeck was the Camp Leader in charge of running the development camp. “The camp focused on team communication skills this year,” said Ronnebeck. “There are also information-sharing opportunities for coaches facilitating the further development of their skills.” “The atmosphere is similar to the environment at national juniors – it is a competition that deserves the recognition of provincial associations because it is truly a training ground for future champions.” This year, Team British Columbia (Sarah Daniels, Megan Daniels, Megan Bourassa and Heather Sinclair) won the women’s side, edging out Team Alberta (Danielle Schmiemann, Kate Goodhelpsen, Brenna Bilassy and Rebecca Allen). On the men’s side, it was Team Manitoba (Kyle Doering, Colton Lott, Kyle Kurz and Braden Calvert) with the win over Team Ontario (Doug Kee, Curtis Easter, Zack Shurtleff and Patrick Clarke) in the final. With many well-known alumni, such as Kaitlin Lawes, Chelsea Carey, Rachel Homan and Charley Thomas coming from its ranks, Ronnebeck says it best: “It is truly a training ground for future champions.”

Teams from Japan, the United States and Canada march in the opening ceremonies of the Optimist International Under-18 Curling Championships in Langley, B.C. (Photo Patrick McConnell)

Well, the ice is leaving for the season and so am I. I look forward to exploring further inside the junior curling world starting next season. If you have any comments or suggestions for future junior curling articles, please send me an email at [email protected] or send me a message through Twitter @inglisdanielle. Good curling and may the rocks be ever in your favour!