Canada’s Rob Armitage and Cathy King skipped their teams to victory on Saturday afternoon in Fredericton, N.B., in the gold-medal games of the 2013 World Senior Curling Championships. 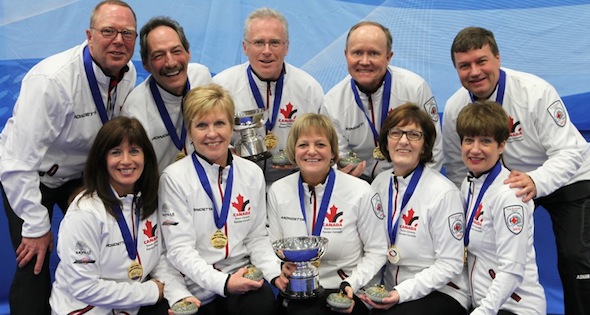 Armitage’s Canadian men’s team from the Red Deer (Alta.) Curling Centre was a 6-4 winner over New Zealand’s Hans Frauenlob, while King’s Canadian women’s team from the Saville Centre in Edmonton beat Austria’s Veronika Huber 13-1. Both Canadian teams finished with unbeaten records at the Grant-Harvey Centre. It was the sixth time in the 12-year history of the World Senior championships that Canada has swept the gold medals. It was also the 51st straight victory for Canadian women’s teams at the World Seniors, dating back to the 2008 event in Vierumäki, Finland, and a sixth straight world senior women’s title for Canada. Canadian teams have won eight men’s and nine women’s gold medals at the World Seniors. “Oh, it’s fantastic,” said King, the bronze-medallist at the 1998 Ford World Women’s Championship in Kamloops, B.C., and a seven-time participant at the Scotties Tournament of Hearts. “I’ve been wanting this title for a long time, like the rest of my team. Being to that many Canadian championships, you want to (win) at least one world championship, so it feels awesome.” 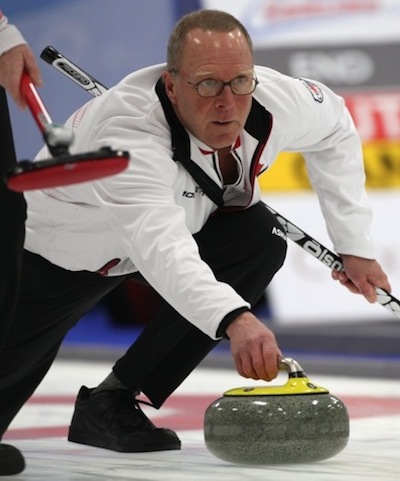 Armitage, backed up by third Keith Glover, second Randy Ponich, lead Wilf Edgar, alternate Lyle Treiber and coach Bill Tschirhart, showed the same consistency and shotmaking that produced nine round-robin victories and another in the semifinal against Switzerland’s Werner Attinger earlier on Saturday. “I said to my team before the game that we’ll throw the centre guard (New Zealand had the hammer in the first end) and we’re going to give him eight ends of pure hell,” said Armitage. “I’m not going to bang for four ends and let him get a cheap deuce, then run to the hills and beat me. I said, ‘We’re going after him.’ After forcing the Kiwis to one in the second end, Armitage put together a go-ahead deuce in the third end and stole one more in the fourth when Frauenlob — who like his three teammates, third Dan Mustapic, second Lorne DePape and lead Allan Langille was born in Canada — was heavy on his last-rock draw to the four-foot. The game-breaker was in the sixth when Armitage made a perfect hit-and-roll with his first rock to set up a draw for three that was enough to send Team Canada to victory. “Oh, I’ve chased this, I’ve chased this and I’ve chased this,” added Armitage of the world title. “There was a time when my knees were bad, and you get to be 47 or 48 and I was still chasing the men’s provincials because I thought, ‘I have to keep my game until I get to seniors.’ I knew I could find the curlers, and I knew I had to have that game still in my pocket to get it done, and it was nice to see it work out. My team played really well.” Switzerland won the bronze medal with a 7-2 win over Sweden’s Karl Nordlund. 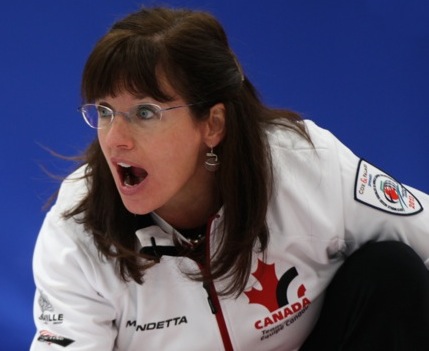 King, meanwhile, couldn’t have asked for a better way to start the game. A series of Austrian misses led to King having a draw for six to open the game. She made it, and along with teammates third Carolyn Morris, second Lesley McEwan, lead Doreen Gares and alternate Christine Jurgenson (Tschirhart coached both Canadian senior teams) was on her way to victory. “Oh, that was huge,” said King, who needed an extra end to beat Sweden’s Ingrid Meldahl in the semifinal earlier on Saturday. “It sort of takes the nerves out of play and the girls were feeling good. They played well all week. Our only close game was this morning when Sweden took us down to the last inch. It was great to come out firing in this game. “I’ve been hoping for this for a long time. I was hoping for it in ladies and unfortunately it didn’t work out. Had to wait until seniors, and finally it came.” It was a third gold medal for Jurgenson, who won the 2009 world senior title as a lead playing for Pat Sanders, and won again two years later skipping her own team. Meanwhile, it was the second World Seniors gold medal for Morris, who won in 2005 skipping for Scotland, making her the first player to ever win world curling championships for two different countries. “I just feel absolutely over the moon,” said Morris. “We really wanted this for each other, and I wanted to win it as a Canadian. I was very proud and honoured to win it as a Scot, but to win it as a Canadian is something very special.” Sweden claimed the bronze medal with a 9-8 extra-end win over Scotland’s Christine Cannon. These were the fifth and sixth medals won by Canadian teams in World Curling Federation championship play this season. Jim Armstrong’s team won gold at the World Wheelchair Championship in Sochi, Russia; Matt Dunstone’s team won bronze at the World Juniors in Sochi; Rachel Homan’s team won bronze at the World Women’s in Riga, Latvia; and Brad Jacobs’ team won silver at the Ford World Men’s championship, presented by Booster Juice, in Victoria.