Canadian men and women to play for World Seniors gold

Canada is going for a pair of gold medals this afternoon on the final day of the World Senior Curling Championships in Fredericton, N.B. 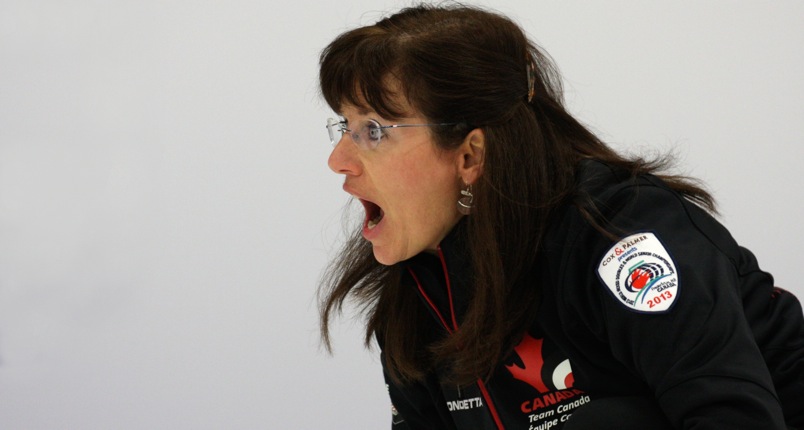 Cathy King’s women’s team from the Saville Centre in Edmonton and Rob Armitage’s men’s team from Red Deer, Alta., both posted semifinal victories on Saturday at the Grant-Harvey Centre to reach the championship finals at 2 p.m. (all times Atlantic). King needed to make a draw to the eight-foot with her final rock of the extra end to beat two-time world champion Ingrid Meldahl of Sweden 7-6. With the win, King, third Carolyn Morris (a former world senior champion representing Scotland), second Lesley McEwan, lead Doreen Gares, alternate Christine Jurgenson (who won the 2009 world senior title skipping Team Canada) and coach Bill Tschirhart will play upstart Veronika Huber of Austria for the gold medal. The game will be webstreamed live at www.youtube.com/WorldCurlingTV. It was the 50th straight victory posted by a Canadian women’s team at the World Seniors, going back to the 2008 World Seniors in Vierumäki, Finland. King and Co. are taking aim at a sixth straight gold medal for Canadian teams at this event, and the ninth overall in the 12-year history of the World Seniors. It’s Austria’s first appearance in the World Senior Women’s Championship. The Austrians upset previously unbeaten Christine Cannon of Scotland 11-6 in the other semifinal. The Canadian women trailed 5-4 after six ends when Sweden stole two in the sixth. But King was able to get two back in the seventh and hold the Swedes to one in the eighth to get hammer for the extra end. In men’s play, meanwhile, Armitage, third Keith Glover, second Randy Ponich, lead Wilf Edgar and alternate Lyle Treiber (Tschirhart is coaching both Canadian senior teams) had an easier time of it, needing just six ends to beat former world men’s silver-medallist Werner Attinger of Switzerland 11-3. The Canadians, who shot 90 per cent as a team (Armitage and Glover were both scored at 94) took control by scoring back-to-back deuces in the third and fourth ends, and the gloves came off when Armitage drew for five in the sixth end. Canada will take on Hans Frauenlob of New Zealand for the gold medal. New Zealand has never won a medal in world championship play at all levels. The Kiwis advanced with a 10-2 win over Karl Nordlund of Sweden. All four New Zealand players — Frauenlob, third Dan Mustapic, second Lorne DePape and lead Allan Langille— are Canadians by birth. Canada has played in all 11 previous World Senior men’s finals, and has won gold in seven of those finals. For live scores and standings from the World Seniors Championship, go to: www.wscc2013.curlingevents.com/.