It’s not very often that you encounter a leader with the ability to impact a sport and a country to the degree that Gerry Peckham has done for curling in Canada. 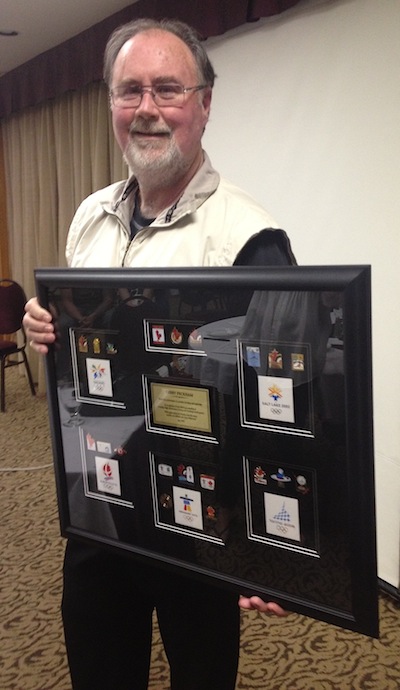 Gerry Peckham was honoured by many of his peers during a National Team camp in May in Winnipeg. (Photo, courtesy Elaine Dagg-Jackson)

Behind the scenes as High Performance Director for the Canadian Curling Association for 23 years, Gerry has never been one to search out the spotlight; in fact, quite the opposite. His mark is on many performances, but few trophies. His absolute commitment to excellence in curling performance is evident across the country, as his disciples spread the lessons incubated through his wisdom, leadership and accessibility. His influence is huge and so is his modesty. So much so, that his friends and colleagues felt the need to recognize his 23-year contribution to high performance athlete and coach development. So, instead of waiting for our leader to retire, we decided to make sure he knew how much we all appreciate what he does and the impact he has. So a surprise special recognition tribute was planned and presented at a recent National Training Camp held in Winnipeg. A montage of photos and messages set to music was followed by the presentation of a custom-produced memory frame of Gerry’s career defined through his five Olympics. The tribute culminated with the singing of Gerry’s favourite song, O Canada, and at that point there wasn’t a dry eye in the room! It was a special experience for all present, and in usual fashion, Gerry was poised, eloquent and moving. “To say I was somewhat overwhelmed would be a major understatement!! A) I did not see it coming; and B) the comments were all so motivating, inspirational and truly appreciated! It was a complete confirmation that there is no substitute for being able to combine your profession with your passion! I will miss the exciting dynamic of the Olympic experience but have the utmost of confidence in our new leadership team. Go Team Canada!!” Gerry Peckham has been my mentor for 25 years. He taught me to be a coach and a leader. I am one of so many who have been positively influenced by Gerry’s leadership. Following are just a few excerpts from the many letters received for the tribute: “Gerry leads through positive influence, mentorship, inspiration, enabling, motivation, collaboration, shaping change, positive challenge and his broad vision. Gerry has achieved a full resume and will have a lasting legacy in our sport.” Wendy Morgan, national wheelchair Team Leader “I feel privileged to be part of a high performance team whose leader is constantly pushing his teammates to find ways to ‘advance the yard sticks’ and, no matter what the initiative or project, ‘knock it out of the park.’ ” Kyle Paquette, Sport Psychology Lead, CCA “Gerry never needs to be the one at the forefront.  As long as the message is passed on by someone, and a team buys into the concept, it doesn’t matter to him who gets the accolades.” Three-time world champion Marcel Rocque “Gerry is almost without equal, in the entire Canadian sport system, for the success that our teams have achieved in International competition and the Olympic Games, on his watch. Year after year, it is a portrait of achievement and always, in the background, despite changing teams, personnel and conditions, there is one man quietly orchestrating the vast blueprint that delivers this success.” Former CCA president and longtime coach Pat B. Reid “Ger has the ability and the ideas to make you better…to ‘move your yardsticks’ and he has certainly done that for me! I have had the pleasure of speaking to Gerry about what makes a great player, a great team and maybe most importantly, a great teammate.  His understanding of our great game is overwhelming and may only be matched by his enthusiasm and ability to find new ways to improve! Nobody loves Canadian curling more than Gerry. He has dedicated his life to doing all that he can to ensure that we hear the Canadian national anthem as much as possible at the end of each and every World Championship and Olympics.” Two-time world champion Brent Laing “It has been your leadership through all those years that has been the single guiding light leading to unparalleled success in international competitions and national development programs.” Former national men’s coach Jim Waite — (Elaine Dagg-Jackson is the Canadian Curling Association’s national women’s team coach)