When the Canadian Curling Association decided to hold a Level 3 Ice Technician course over the summer in Sudbury, Ont., CCA Director of Championship Services and Curling Club Development Danny Lamoureux really had no idea what to expect. 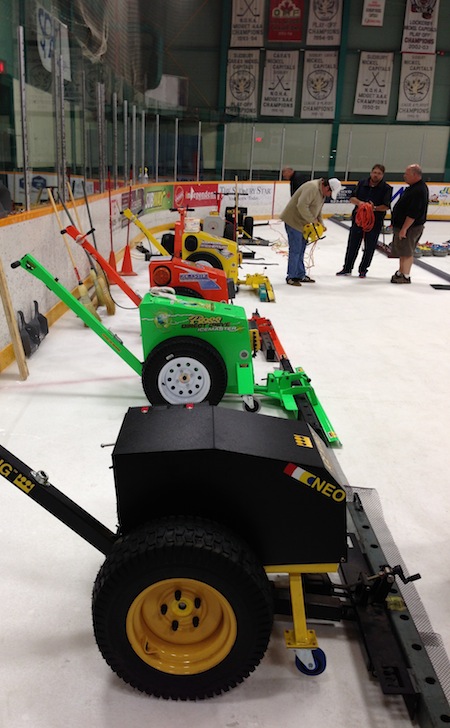 After all, it was the first time since 2007 that the CCA had offered a course on this scale — five full days involving classroom sessions and six sheets of curling ice to work on at the Gerry McCrory Countryside Sports Complex, leading to final exams that would determine whether participants would get their Level 3 certification, which qualifies them to prepare arena ice. But when the early registrations started to pour in, Lamoureux knew he had a hit on his hands, and plans are being drawn up to hold the same course again next year in Sudbury, and to offer another Level 3 course somewhere in the West to accommodate more students. “It was well beyond expectations,” said Lamoureux. “There’s obviously a great deal of interest out there, and it was great to see so many young icemakers wanting to not only stay in the business, but also to progress.” The course was taught by CCA Chief Ice Technician Jamie Bourassa, along with fellow Level 4 Ice Techs Don Powell and Tom Leonard. “It was the first time I’ve been out east, so it was nice to see the way they do things out there — a couple different little aspects to the way they make ice,” said 21-year-old B.C. icemaker Dayne Gagnon, son of longtime ice tech B.J. Gagnon (they oversee the ice at the Abbotsford and Kamloops Curling Clubs). “And I met a lot of guys who know my dad and had good things to say about him.” In addition to the classroom work, the students spent plenty of time on the ice, getting information on refrigeration, stones and scrapers. “A lot of it was about arena ice, but there was a lot of the stuff that will work on any ice surface, club or arena,” said Bourassa. “It was a good cross-section of people. There were people who’ve been in the business for a while with no aspirations of making championship ice; they just wanted to further their knowledge and make their club ice better. And there was a group there who want to carry on in the business to the point where they’re making provincial and national championship ice.” 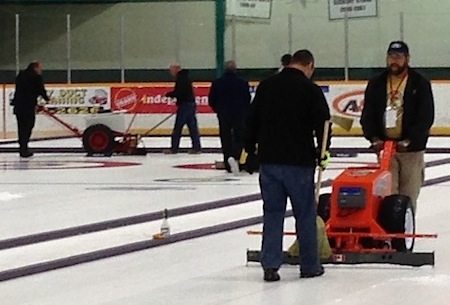 Students arrived at the arena in Sudbury with no curling ice in place, they were tasked initially with installing six sheets to work on during the five-day course. And to end the course, said Bourassa, “part of their test was that they had to go out in pairs and prepare a sheet of ice like it was getting ready for a championship draw.” In addition to the benefits of the added knowledge picked up in Sudbury, said Bourassa, the networking that went on during the five days will continue to pay dividends across the country, “There’s not of a lot of us in our business, so we need a network that we can work with,” said Bourassa. “So all these guys have a whole new network of people they can talk to when they’re having issues. Someone has had that same problem that they’re having.” That, suggested Dayne Gagnon, may be the most important item that he carried home with him to B.C. after the course. “It was good to talk to all of those guys and hear about their experiences with their clubs,” said Gagnon. “And I’m connected to all of them now; it’s easy for us to share information and help each other out. We’re all after the same thing, right? We want to put good ice out there, and we’re all there to help each other out.”