Four days. Six hours in the classroom. Six hours at fitness practice. Twelve hours on the ice. One dance and one massive team shoot out. Held twice in August for over 200 young curlers, the Alberta Rocks Junior Curling Camp, presented by The Dominion, enjoyed another successful year. The curlers learned, curled, and danced their way into new friendships. 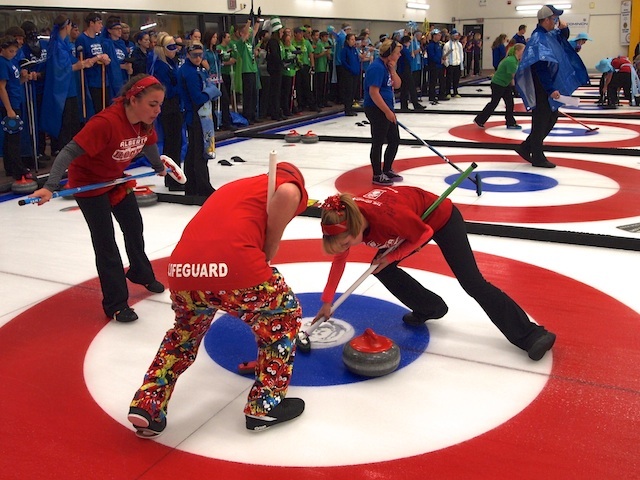 Red Team sweep their rock towards the button during the shoot out competition. (Photo by Lisa Shamchuk)

So what were their favourite moments? For the campers, aged 12 to 17, it’s no surprise the dance was a highlight. Many enjoyed the fitness and games sessions because they had a chance to build on teamwork skills and meet new friends. For other curlers, the camp is a chance to reconnect with friends they haven’t seen since last year’s event. At the top of favourite on-ice moments was the shoot out, which wraps up the weekend with a draw-to-the-button and cheering competition. “Everyone gets so dressed up and it’s crazy wild in there,” says camper Payton Watts, 15. “It’s so loud. It’s just fun to compete against all the other teams. It’s a really good time.” “You have to try to focus as much as you can when everyone is screaming and when you make a good shot everyone goes crazy and it’s a really good feeling after,” says Kate Eisenhawer, also 15. Camp instructors make a big impression on the young curlers as well. “They have people who actually curl in the big events come in and they teach you,” says Amy Carson, age 17. Jessica Germain, also 17, agrees: “It’s really cool to say that Ryan Fry is our instructor.” Aside from their experience, the high-profile instructors also offered individualized coaching, in a way that Germain appreciates. “They incorporate learning and entertainment,” she says. Curlers enjoyed trying out new technology, too. Instructors used iPads and software such as Dartfish and Coaches Eye to provide video analysis of curling deliveries. A “smartbroom” equipped with speed and pressure gauges analyzed sweeping strength. “The broom was really cool,” says Izzy Laesecke, 13. “It’s going to help me sweep better.” The curlers also appreciated their newly acquired skills. Many mentioned how excited they were to try their new and improved deliveries during the curling season. Other notable take-aways included sweeping and skipping techniques, as well as high-performance nutrition tips and strategy advice. 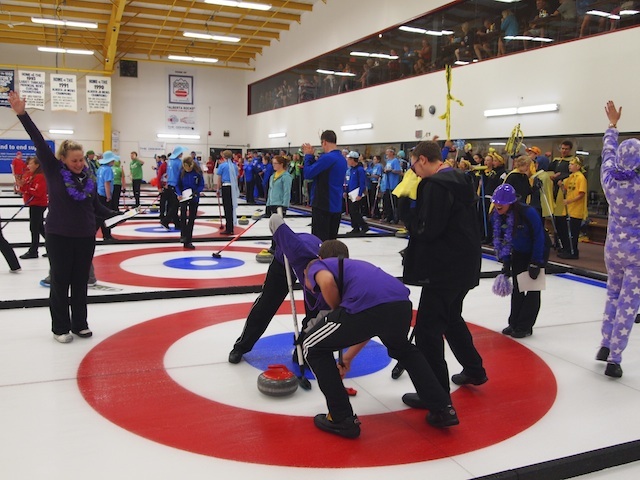 Purple Team celebrates a close shot during the shoot out competition. (Photo by Lisa Shamchuk)

These young curling ambassadors would like other kids to know how awesome curling is. A number of future champions think curling is great because it accommodates all abilities and ages. “You can really carry with it all your life,” says Cole Adams, age 14. Alyssa Meger, 12, enjoys that curling is “one of those sports where no one is more important than anyone else. Everyone has a part in the team.” Erica Watts, also 12, likes the mental aspect of the game. “It’s a really great sport and there’s a lot of thinking involved so it’s good for your mind and your body,” she says. There’s no denying the athletes enjoy the social side of the game. Gavin Melligan, 17, hopes the younger generation gets into curling because the smaller team allows players to know each other better. “You could say it’s a big social event!” his friend Watts says. “It’s a fun sport and you meet lots of new people…you can get really good at it and go big or you can just have fun with it.” High school teacher and club coach certified instructor Corey Reynolds has been at Alberta Rocks for six years. He hopes curlers come away from camp with something they can work on throughout the season in order to get better at the sport. However, Reynolds also agrees the camp shows kids the fun side of curling. “If curling isn’t fun, you’re going to see a lot of kids not want to do it,” he says. “If you show that curling is fun first, then you can start to approach the subject at that competitive level.” Learning facilitator for the Southern Alberta Curling Association, Andy Jones, agrees. “We have to relate everything back to long term athlete development,” he says. “It’s about the ‘fun’damentals.” When asked, all the young curlers said they want to come back next year. Ultimately, Reynolds sums up Alberta Rocks Junior Curling Camp’s goal: “The main point of this camp is to have fun, and maybe learn a bit about curling.” 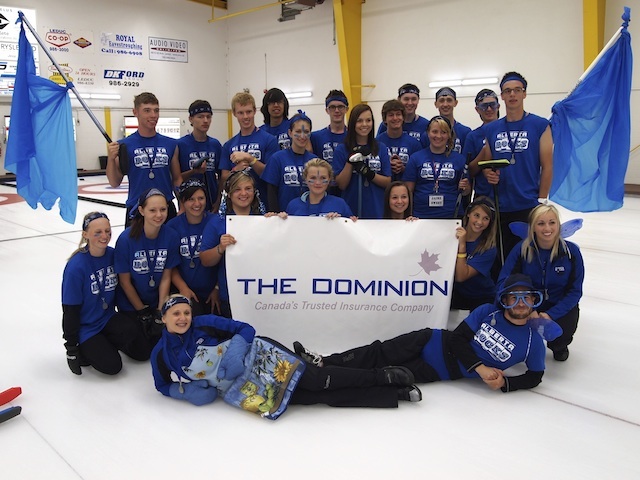