Ontario’s Glenn Howard boasts a competitive curling resume that would be the envy of virtually anyone that ever sat in the hack with the championship on the line, encompassing almost every major achievement in the sport. The only notable omission is the honour of representing Canada at the Olympic Games, and he has the opportunity of resolving that issue, Dec. 1-8 at the Tim Hortons Roar of the Rings, presented by Monsanto. 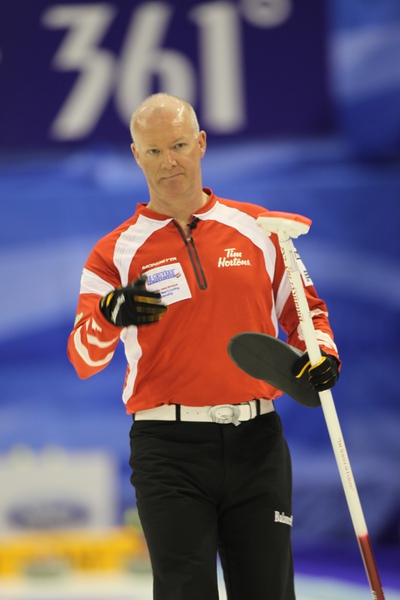 Howard will be one of eight men’s teams competing in the Canadian Curling Trials in Winnipeg’s MTS Centre, the final stepping stone on the road to Sochi, Russia for the 2014 Olympics. At the 2009 Trials in Edmonton, Howard advanced to the championship final where he lost to eventual Olympic champion Kevin Martin. In fact, Howard lost only two games the entire week, once to Martin in the round robin and again in the gold medal match. “The only thing we have to do different this time around is win one more game,” said Howard. “We weren’t dissatisfied with anything we did. We were pretty pleased… we played great all week and in the final just came out a little flat.” “You can’t play average against a team like Kevin Martin’s, or any of the others in the field for that matter, and that’s what we did. If you play average at that level, you’re going to get beaten.” The skip from the Penetanguishene Curling Club is hesitant to say if this will be his last shot at the Olympics. “I really don’t know if I’ll hang on another four years for the next Trials. I’ll be 55 by then, but it’s hard to say… I’ll keep competing as long as I’m still having fun. My gut will tell me when it’s time to pack it in.” But Howard is adamant that regardless of the outcome this December in Winnipeg, it won’t be the defining moment of what is unquestionably one of the most successful records in curling history. “I’ve had a great career and I don’t think I’ve got anything to prove. Sure it would be great to have the Olympic experience and hang the gold medal around your neck, but if my career ended yesterday, I’d have no regrets.” That career includes 15 Brier appearances, resulting in four Tankard titles, seven silver medals and three bronze. Howard has represented Ontario at the Brier for the past eight consecutive years, and has played more games in the national men’s championship than any other curler in the history of the game. He also has four gold medals from the World Men’s Curling Championship. On the eve of the opening event of the season, the AMC Shorty Jenkins Classic, Sept. 19-22 in Brockville, Ont., Howard said the team has planned its schedule strategically leading up to the Trials. “We have five events scheduled prior to the Trials, it’s one or two less that we’d normally play, but we’re trying to limit the amount of travel. We all have day jobs, so when you’re travelling a lot it wears on you. We want to stay hungry, and be as fresh as possible come December, so we’re limiting our events and putting in a bit more practice.”

The team members, including Wayne Middaugh, Brent Laing and Craig Savill, all take a different approach to training, said the skip. “I’ve been working with a personal trainer for the past four years – the biggest thing for me is to keep my legs in shape. But we all have our own individual schedules… everyone knows what works best for them.” With the biggest event in Canadian curling on the horizon, Howard indicated there’s no real secret to Olympic success. “We’ve had two incredible years with Wayne on the team, and we’re not planning on doing anything different. It all comes down to peaking at the right time – first in December, and then again in February.” “You Gotta Be There” when the top teams in the country shoot for Olympic glory in Winnipeg. The prime seats in the MTS Centre are available now by clicking here.