The start of the curling season is just as important to coaches as it is to curlers. While teams of all levels are getting back on the ice, coaches are working on their skills too, attending National Coaching Certification Programs delivered by their Member Associations (MA). So, who coaches the coaches? Learning Facilitators (LF) at each MA provide the front-line instruction. But those LFs require training too, and that is the role of Master Learning Facilitators. Regular national meetings bring these MLFs together, often in conjunction with the Canadian Curling Association’s AGM in June, but this year, the National Master Learning Facilitator Training Session took place September 13-15 in Whitby, Ont., attracting coaches from across Canada As a special feature of these meetings at the state-of-the-art Abilities Centre, the CCA partnered with the Ontario Curling Association’s annual Learning Facilitator Seminar, allowing for a productive networking and sharing opportunity among the National MLFs and Ontario’s LFs. 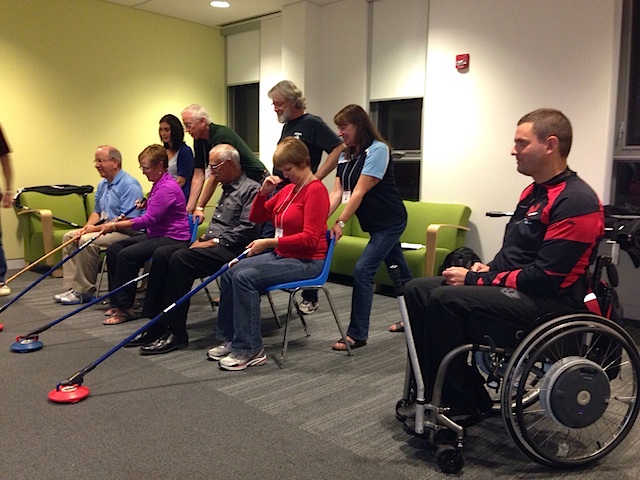 “The weekend was such a fantastic opportunity for all the MA-Techies to discuss and share their experiences in developing the sport and delivering the NCCP Coach training,” says Dick Henderson, NCCP Transition Committee and Technical Coordinator for the Northern Ontario Curling Association. “There was such strong agreement that opportunities like this will go a long way to strengthening the delivery of the NCCP coaching programs and ensuring that they remain consistent right across the country.” The NCCP Transition Committee consisting of Jennifer Ferris, Wayne Kiel, Dick Henderson, Andrea Ronnebeck and Nicole Dubuc, as well as the OCA’s Tom Ward facilitated the meetings. “Tom Ward was instrumental in getting this training session off the ground and organized,” says Ferris, NCCP Transition Consultant for the CCA. “He didn’t hesitate when I called in the summer and asked if our national meeting could join Ontario’s LF seminar. We’re excited about future opportunities.” Facilitators received information and training on Professional Development, Learning Facilitator/Evaluator Certification, Competition Development Launch, Technical Skills, Mental Performance Consultants in Curling, Transition Plans and future projects, and they participated in Facilitation Training and sport specific peer teaching. “It was clear a lot of thought was put into the training and the way it was delivered,” says Katie Brooks, an OCA Learning Facilitator. “I enjoyed the opportunity to demonstrate my facilitation skills in front of my peers and receive feedback in return.” The session also saw the launch of the CCA’s first Professional Development Program – Wheelchair Curling Coach, designed by Karen Watson of Curl BC. Because Watson wasn’t able to attend, Wayne Kiel trained a group of MLFs to deliver this program within their province or territory. Assisting in the training was Mark Ideson of the Canadian National Wheelchair team for demonstrations and athlete sharing – a tremendous benefit to participants in this new coaching program. Attendees conducted an intensive review of current coach training programs (Club Coach: Youth, Club Coach and Competition Coach). As part of the NCCP’s commitment to quality, these programs will be updated in time for the 2014 season. “Of course it wasn’t all business all weekend,” says Ferris. “Facilitators enjoyed a session of Frisbee Golf and dinner at nearby Annandale Curling Club.” “We’re in the midst of updating our Coach information on the CCA’s website,” she says. “We’re working with the Coaching Association of Canada on a project to make our Coach information clearer and easier to access.” Watch for upcoming information about the exciting changes to the NCCP’s Coach Development Programs in Curling.