House Call: Advice from an icemaker

After a game of curling, there often seems to be a disconnect between the ice conditions and how players think the ice affected their game. Time and time again missed shots are blamed on poor ice conditions. Players rarely stop to think about the effect they’re having on the ice surface. The truth is, players have a lot more to do with creating their own on-ice environment than they think.

Leaving your hands, fingers, knees or rear end on the ice for any extended period of time will cause problems (Photo Andrew Klaver)

Level 3 Ice Technician and Head Icemaker at the Calgary Winter Club (CWC) Rob Hawley has painstakingly created countless playing surfaces during his 31-year career. I asked Rob if there were five simple things curlers could do to improve playing conditions, and he came up with some great answers. Hawley is a curler himself so he not only has the best interests of the ice in mind; he truly cares about the sport of curling itself. Here’s his advice: 1. Maintain Your Shoes Make sure you have one pair of shoes dedicated to curling and curling only. Thou shalt not walk across the parking lot in these sacred shoes, nor shalt thou run willy-nilly round the club in the sacred shoes, lest they become filthy (even if they look clean) and bring that filth onto the ice. Hawley urges curlers to put on their shoes only for the game and suggests using both an electric shoe cleaner and walking across an adhesive mat to make sure shoes are completely clean before stepping onto the ice. 2. What Not to Wear Many curlers may not be aware of this, but Hawley stresses, “fleece sweaters (and pants) are just horrid for the ice. Little balls of fluff come off the material and end up on the ice.” Hawley says this problem is especially bad after Christmas when everyone comes to curling proudly wearing brand new fleece jackets and sweaters. The balls of fluff from the fleece clothing end up on the ice and cause rocks to pick. 3. Maintain Your Slider To keep from gouging the ice, avoid using scratched sliders. The deep gouges left behind by an ill-maintained slider can later have an effect on how rocks react to the ice surface. According to Hawley, these gouges often run from the hack all the way up past the hog-line, which means they could later affect a rock’s path at a most critical time – in the house. 4. Be Careful Where You Put Those Hands Leaving your hands, fingers, knees or rear end on the ice for any extended period of time will cause problems. According to Hawley, the time it takes to permanently burn warm body parts into the ice takes “not very long because your hands are so warm. In seconds the ice starts melting and you can take the pebble right off.” 5. Maintain Your Gripper According to Hawley, debris left behind from grippers can be a nightmare. The little bits of rubber that come off a gripper can cause rocks to pick and leave the ice looking dirty. Hawley recommends purchasing a new gripper every season and giving it a good wash with soap and water a couple times a year. “Grippers collect everything because they’re made from soft rubber… It doesn’t hurt to wash your gripper.” 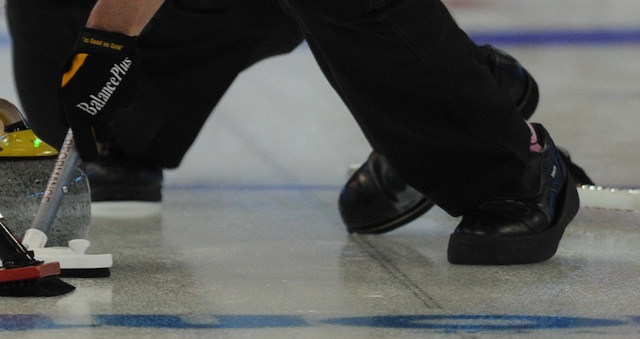 A common thread ties Hawley’s suggestions up neatly: “The basic idea is to not bring in outside dirt… it definitely has an effect.” However, Hawley is not suggesting we spend so much time obsessing over debris that we forget to enjoy the game: “We just have to respect the ice and the clubs we play at.” Want to read more about tips for beginning adult curlers? Check out these past issues of House Call.