The mental side of the Roar of the Rings

Our tour season has started, but the Tim Hortons Roar of the Rings Canadian Curling Trials are in the front of our minds as we continue to prepare every day for the event.

Nolan Thiessen has been to enough major championship events to realize the mental preparation is just as important as the physical preparation. (Photo, CCA/Michael Burns)

Preparation does not just mean being physically prepared; it also means being mentally prepared for the week. There is not much to choose from with all of the talent in Canada so the team that handles the mental stress and the ebbs and flows of the week the best will likely be the last one standing. I have been fortunate enough to play in a few major curling events over my career to date. Most people I have talked to just assume that a Brier is very similar to the Olympic Trials and that we can use that knowledge as a basis to prepare. What I noticed after I had a chance to play in one of each is they are completely different in both how I felt as a player and what the atmosphere was in the arena. It is almost as though the fans realize how big this event is to us as players. The Olympic Games are such a big deal, it is so much bigger than any one sport, and everyone in the stands knows the stakes so it feels like they get as nervous as us players. It creates a noticeably quieter, more subdued atmosphere in the arena. This more subdued atmosphere, compared to the raucous Brier crowds and their provincial allegiances, can affect how you feel on the ice. The great part about playing is that we get a say in what happens on the ice. Even when we feel the nervousness from our friends and family in the stands, we get to play the games and get into the groove of competing. Once the game begins you need to use  any mental capacity that you have to execute on the ice. Even though we get a say in what happens the first week of December, we still need to mentally prepare for what will and could happen. We have played in two Brier finals as a team, but we have never played for the right to represent Canada at the Olympics and with that opportunity will bring a whole new level of nerves and stresses to overcome. The one solution to help control the stress of the Olympic Trials is to prepare a plan for the week. Our team coach, who is also our sports psychologist, Dr. John Dunn, has a great saying that we will try to follow in December: “Plan your race and race your plan” (no way he came up with that himself, though!). By planning out our week, filling in some of our downtime with activities to keep us busy and loose, we are attempting to control as much of the situation as we can. Knowing what to expect, and not having many surprises can limit excess stress. 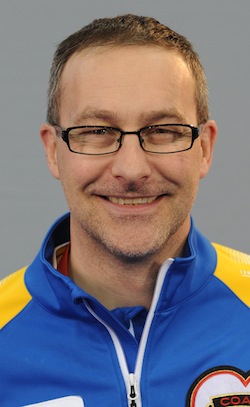 That is what we need to remember as a team: there is no such thing as complete removal of stress. If you are not nervous or stressed out a little bit during the week of the Roar of the Rings, you do not have a pulse. So feeling those nerves is not necessarily a bad thing, it is more just something that needs to be managed so that we can play at our highest level during the event. Nervous energy does not mean that you will come out and choke away a game. I know for a fact that one player before the 2009 Roar of the Rings final threw up all of his breakfast from nerves (his name rhymes with Ren Bebert) on the day of the final. I, on the other hand, was sitting in the players’ lounge watching the final since we had been eliminated after the round robin. I’d have traded places with “Ren” in a heartbeat. The exciting thing is that if we feel those nerves during the week of the Roar of the Rings, it means we are playing for that spot in Sochi. Would we rather feel that stress or not get to play in those games? So if we are lucky enough to get to play in that final then why not embrace it and everything that comes with it? There will be about a thousand curling teams that would trade places so why not at least enjoy the opportunity? Nerves will come, the game will get stressful, good and bad things will happen, but if you are in that final you have a 50% chance to realize your dream so have some fun. As I have said in an earlier blog though, the preparation that I have done and our team has done has been extensive and that plays into our mental preparation. Knowing how hard we have worked and how well we have prepared will enable us to not worry about anything except for execution of our game plan and winning curling games. Taking strength from knowing that you have done the work can be a great stress relief. Work your butt off in the lead up to the event. Plan your race and race your plan. Do all the hard work before the event so that once the feet hit the fire you can just trust that preparation and be free to execute as best you can.