John Morris couldn’t have asked for a better way to begin his march to a hoped-for second straight Olympic gold medal. 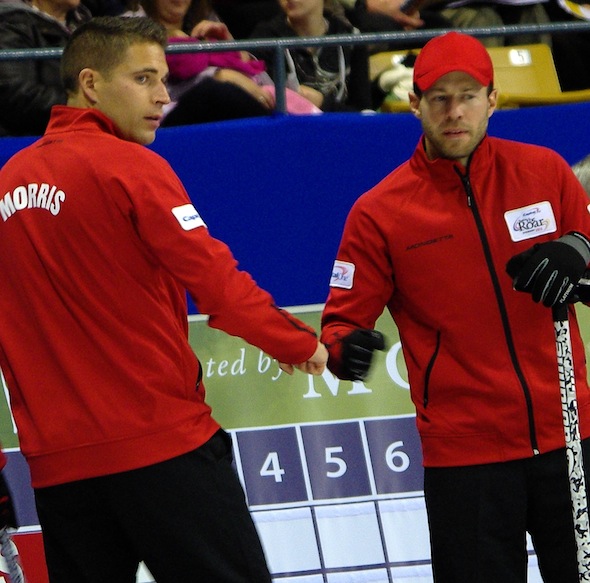 Morris, who won gold at the 2010 Winter Olympics in Vancouver throwing third rocks for Kevin Martin, skipped his new team to a victory on Tuesday night at the Kitchener (Ont.) Memorial Auditorium, rolling to a 10-2 win over Rob Rumfeldt of Guelph, Ont., to cap the opening day of action at the 2013 Capital One Road to the Roar Pre-Trials, presented by Monsanto. Two men’s and two women’s teams will move on from the Capital One Road to the Roar to the Tim Hortons Roar of the Rings Canadian Curling Trials, presented by Monsanto, Dec. 1-8 at the MTS Centre in Winnipeg, where Canada’s teams for the 2014 Winter Olympics in Sochi, Russia, will be decided. Morris’s team, representing Kelowna and Vernon, B.C., took one in the first end, and then piled on with a stolen single in the second and two more in the third and never looked back to move on in the A-Event of the triple-knockout competition. Rumfeldt’s team dropped to the B-Event. It was a good way to get rid of the opening-day jitters, Morris suggested. “Especially when you don’t play the first draw, right?” said  Morris, whose team is rounded out by third Jim Cotter (who throws skip rocks), second Tyrel Griffith, lead Rick Sawatzky and coach Pat Ryan. “And it’s well-known that Sheet E is tough. It’s definitely playing with some more curl in interesting spots compared to the pother sheets. So we’re glad we got a win on that sheet, and now we can focus on whatever sheet we’re on next. We can’t take anything lightly; every game you get here is going to be against some tough opponents.” Morris, the No. 4 seed in the 12-team men’s competition, will take on Greg Balsdon of Elgin, Ont., in an A-event semifinal on Wednesday night. Balsdon made a wonderful angle-raise takeout for three in the 10th end to beat reigning Tim Hortons Brier champ and top seed Brad Jacobs of Sault Ste. Marie, Ont., 10-9. Jacobs had taken an 8-3 lead thanks to three in the fourth end, one more in the fifth and a steal of two in the sixth before Balsdon mounted the comeback. In other Tuesday night men’s play, 2006 Olympic gold-medallist Brad Gushue of St. John’s, N.L., stole three in the second end and one more in the third and sailed to a 9-5 triumph over 2006 Tim Hortons Brier champ Jean-Michel Ménard of St-Romuald, Que. With the victory, Gushue, the second seed, will play Jake Higgs of Glencoe, Ont., in the other A-Event semifinal on Wednesday night. Higgs was a 6-4 winner over Mark Kean of Ajax, Ont., in the other men’s game 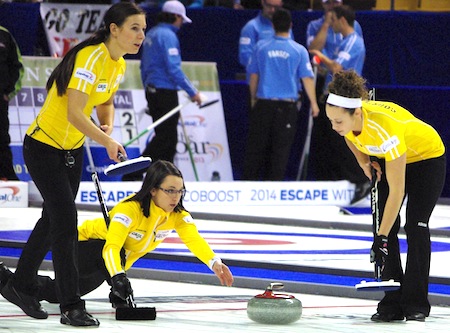