Rumfeldt rocks the first draw on the Road to the Roar

Local favourite Rob Rumfeldt got off to a terrific start to open the 2013 Capital One Road to the Roar Pre-Trials, presented by Monsanto. Rumfeldt’s team from Guelph, Ont. — a 30-minute drive from the Kitchener Memorial Auditorium — entered the Pre-Trials as the 12th seed in a 12-team field, but scored three in the first end and three more in the third en route to an emphatic 12-5 win over fifth-seed Steve Laycock of Saskatoon. Two men’s and two women’s teams will move on from the Road to the Roar to the Tim Hortons Roar of the Rings Canadian Curling Trials, presented by Monsanto, Dec. 1-8 at the MTS Centre in Winnipeg, where Canada’s teams for the 2014 Winter Olympics in Sochi, Russia, will be decided.

Rumfeldt — with his team of Adam Spencer, Scott Howard and Scott Hodgson, along with alternate Greg Robinson and coach Brad Sheridan — put the pressure on early, scoring three with hammer in the first end, and holding three-time Brier participant Laycock (backed by Kirk Muyres, Colton Flasch, Dallan Muyres and coach Lyle Muyres) to a single in the second. Despite trailing 7-3 after six, the Saskatoon foursome took a deuce in seven and had Rumfeldt in trouble in the eighth to steal a single. But with a Laycock rock buried, Rumfeldt made a tricky angle raise on half a rock to score three and put the win in the bank. “We’d seen a few shots down there and I think from our perspective it was just a question of the weight we wanted to throw,” said Rumfeldt. “Adam and I talked about it and it was somewhere between a third and half to make it. It was fun to throw.” “It’s one game at a time,” he said about the tough competition ahead this week. “You take it very patiently.” In the only all-Ontario matchup, Joe Frans of the Bradford Curing Club had his hands full early as Jake Higgs and his team from the Glencoe & District Curling Club took two in the first and stole another in the second when Frans’s final draw came up short. Higgs, calling the game but leaving last rocks to third Brent Ross, forced Frans to chase most of the game and stole the last two ends for a 9-3 victory. 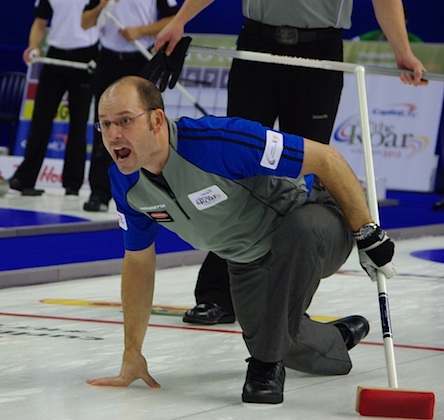 Ottawa’s Bryan Cochrane faced 2006 Brier champion Jean-Michel Ménard of St-Romuald, Que., in a game that saw lots of rocks in play from the start. After holding Cochrane to a single in the first, Ménard took control and cruised to a 10-4 win. In the other morning game, Greg Balsdon of the Loonie Sports Club in Elgin, Ont., hit for three in the ninth end for a 7-4 win over 2012 Tim Hortons Brier bronze-medallist Rob Fowler of Brandon, Man. The top four men’s seeds — Brad Jacobs of Sault Ste. Marie, Ont., Brad Gushue of St. John’s, N.L., Mark Kean of Toronto and John Morris of Kelowna/Vernon, B.C. — all had byes in the morning draw. The Road to the Roar continues on Tuesday with draws at 2 p.m. (the first women’s competitition) and 7:30 p.m. (all times EST). Playoff draws will be broadcast on Saturday and Sunday by TSN/RDS, the official broadcast partner of the Season of Champions. Live scoring, statistics and updated draw brackets are available at https://www.curling.ca/scoreboard/ The French version of this story will be available at https://www.curling.ca/2013roadtotheroar-fr/ as soon as possible. To purchase tickets to the 2013 Capital One Road to the Roar, presented by Monsanto, go to https://www.curling.ca/2013roadtotheroar-en/tickets/ For ticket information about the 2013 Tim Hortons Roar of the Rings, presented by Monsanto, go to https://www.curling.ca/2013roaroftherings-en/tickets/