Jacobs bounces back in style

Brad Jacobs regrouped after a tough loss on Tuesday night and powered his way to a 7-4 victory on Wednesday afternoon in B-Event action at the 2013 Capital One Road to the Roar, presented by Monsanto, in Kitchener, Ont. 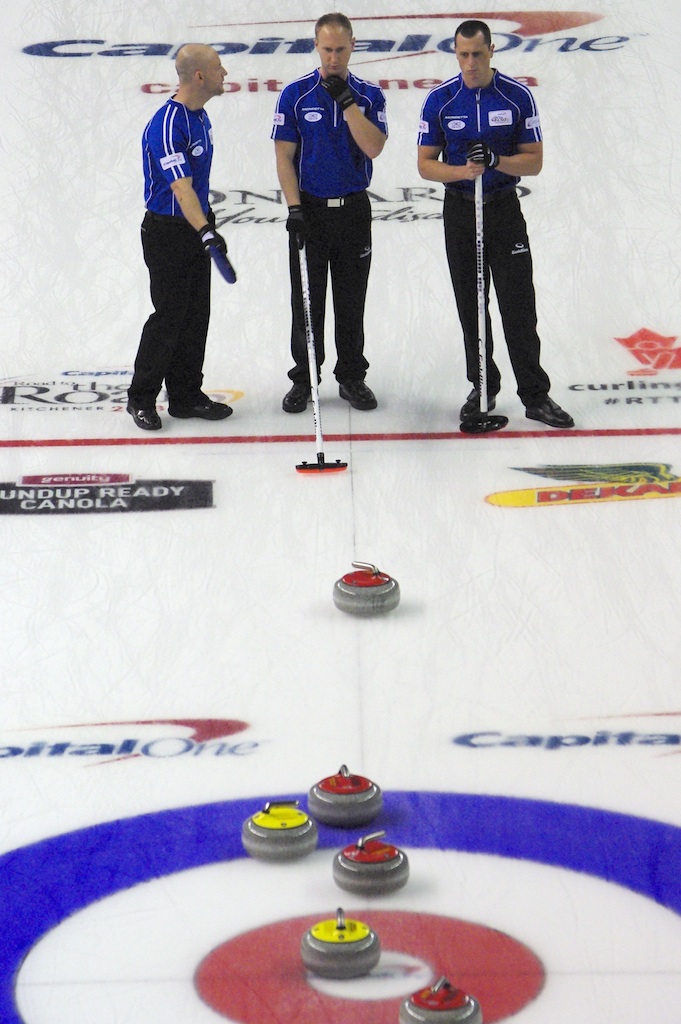 Jacobs is among the 12 men’s and 12 women’s teams attempting to claim the final four spots in the Tim Hortons Roar of the Rings Canadian Curling Trials, presented by Monsanto, Dec. 1-8 at the MTS Centre in Winnipeg, where Canada’s teams for the 2014 Winter Olympics in Sochi, Russia, will be decided. Jacobs with his team of Ryan Fry, E.J. Harnden, Ryan Harnden and coach Tom Coulterman, took control of the game early and never let up. “If you curl for a long time, stuff like that is going to happen,” said Jacobs about regrouping after the tough 10-9 loss to Greg Baldson on Tuesday night, which saw Balsdon come back from an early deficit to score three in the 10th end for the win. “We were all happy with how we threw the rocks yesterday, and we just wanted to come out and throw the rock as well as we did the day before. And we did, and look what happened. We got the win.” Rumfeldt – with teammates Adam Spencer, Scott Howard, Scott Hodgson, alternate Greg Robinson and coach Brad Sheridan – did his best to make it difficult for the 2013 Tim Hortons Brier champion. In the fifth, the skip from Guelph, Ont., and made a precision draw, forcing Jacobs to make an equally difficult draw to catch a corner of the button for two points and a 5-2 lead. “It was a good way to bounce back and we showed a lot of resilience,” Jacobs said. In other Draw 5 action, Steve Laycock of Saskatoon scored a 6-4 decision over Rob Fowler of Brandon, Man., in a game that saw plenty of rocks in play. In a messy fifth end, Fowler drew to the four-foot, forcing Laycock to make a difficult in-off with his last rock for one point. Leading 5-4 after nine, Laycock took a single in the final end to put the game away. Mark Kean of Ajax, Ont., handed Jean-Michel Ménard of St-Romuald, Que., a second loss, scoring three in the ninth for a 10-5 victory. After six ends, trailing 6-4, Ménard just missed a raise double takeout, giving up a steal of one and allowing Kean to go ahead 7-4 and hold on for the win. Joe Frans of Bradford, Ont., opened with a score of three and never looked back on the way to a 9-4 victory over Bryan Cochrane of Ottawa. Frans put the game away after scoring four in the sixth and stealing another in the seventh. In the only women’s game of the draw – featuring two teams from Calgary – Shannon Kleibrink made a clutch draw for a single point in the tenth to defeat Cheryl Bernard 6-5 for her first win of the competition in a battle of the past two Canadian Olympic skips. Kleibrink won bronze in 2006 in Turin, Italy, while Bernard claimed silver four years later in Vancouver. With the losses, Bernard, Fowler, Rumfeldt, Ménard and Cochrane move into the C-Event, facing elimination with a third loss. The Road to the Roar continues on Wednesday at 7 p.m. (all times EST). Playoff draws will be broadcast on Saturday and Sunday by TSN/RDS, the official broadcast partner of the Season of Champions. Go to https://www.curling.ca/championships/television-and-webcast-schedule/ for the schedule. Live scoring, statistics and updated draw brackets are available at https://www.curling.ca/scoreboard/ The French version of this story will be available at https://www.curling.ca/2013roadtotheroar-fr/ as soon as possible. To purchase tickets to the 2013 Capital One Road to the Roar, presented by Monsanto, go to https://www.curling.ca/2013roadtotheroar-en/tickets/ For ticket information about the 2013 Tim Hortons Roar of the Rings, presented by Monsanto, go to https://www.curling.ca/2013roaroftherings-en/tickets/