The Canadian Curling Association is taking the Roaring Game outdoors. 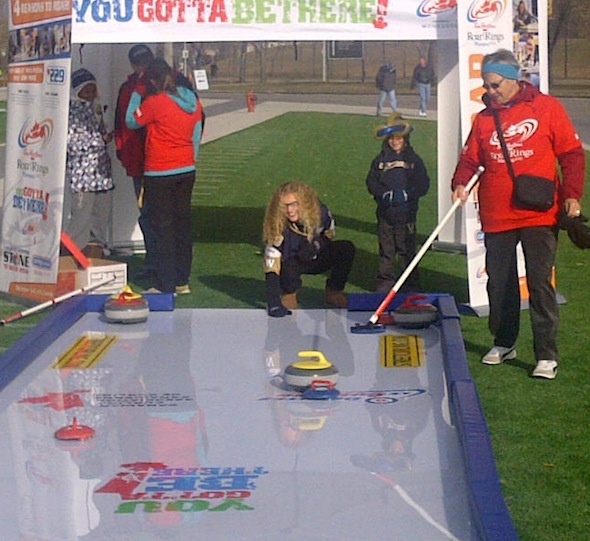 The CCA’s new Street Curling game made its debut in Winnipeg this past weekend at a Blue Bombers game. (Photo, courtesy Tim Hortons Roar of the Rings host committee)

Well, in fact, thanks to our new Street Curling portable curling sheet, we’re taking it anywhere we want — outdoors, indoors, streets, shopping malls — to help promote our Season Of Champions events and our sport. The CCA’s first Street Curling unit made its debut in Winnipeg this past weekend at a Blue Bombers game, and will appear again at today at the MTS Centre in downtown Winnipeg to coincide with Thursday’s launch of of single-draw tickets for the Tim Hortons Roar of the Rings Canadian Curling Trials, Dec. 1-8, also at the MTS Centre. Go to www.curling.ca/2013roaroftherings-en/tickets/ for more information. “This is a great opportunity to show off our sport to those who’ve never touched a curling rock or stepped onto a sheet of curling ice,” said CCA Chief Executive Officer Greg Stremlaw. “Instead of bringing people to curling rinks, we’re bringing the curling rinks to the people, and hopefully they get a sense of how great our sport is, and want to participate even more.” 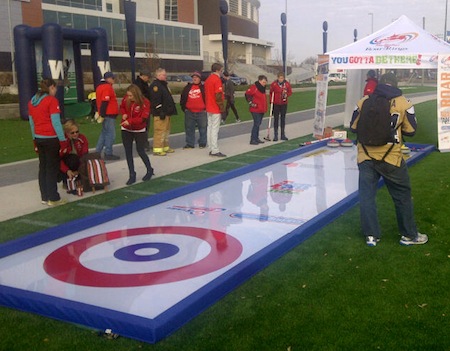 The new Street Curling unit is portable and will be appearing at various Season of Champions host cities this season. (Photo, courtesy Tim Hortons Roar of the Rings host committee)

The innovative Street Curling setup (find out more at streetcurling.com) was the creation of Chad McMullan of Rock Solid Productions. McMullan, a former competitive curler himself, wanted something that came as close as possible to simulating real-ice conditions. “Others have tried various different things over the years but we think we’ve developed the most realistic experience possible without ice,” he said. “Of course it also had to be visually appealing as well. Once we knew we had the right process, we turned our focus to making it as simple to use, and easy to transport, as possible.” Canada Curling Stone produces the rocks, while the eight-by-32-foot surface is, in essence, a type of Plexiglass with a few tricks to add to the realism of curling — yes, the rocks really curl the way you want them to curl. Street Curling has made appearances at Super Bowls (a unit will be used at Super Bowl XLVIII in New Jersey), Grey Cups (it was wildly popular at the 100th Grey Cup in downtown Toronto), Las Vegas (showgirls, Fake [we think] Elvis and even Jeff Stoughton were playing Street Curling during a WFG Continental Cup promotion on Fremont Street in downtown Las Vegas late last month) and the Big Brother Canada TV show. Best of all, it’s portable — the entire unit packs into an eight-by-four-by-four-foot box — so you can count on seeing the CCA’s Street Curling unit often in the coming weeks and month. After a few more appearances in Winnipeg, it will be en route to Montreal for 2014 Scotties Tournament of Hearts promotions.