John Morris is a step closer to back-to-back trips to the Winter Olympic Games. Morris’s team representing Kelowna and Vernon, B.C. — third Jim Cotter (who throws last rocks), second Tyrel Griffith, lead Rick Sawatsky and coach Pat Ryan — knocked off Brad Gushue of St. John’s, N.L., 8-3 on Thursday night at the Memorial Auditorium in Kitchener, Ont., in the men’s A-Event final at the 2013 Capital One Road to the Roar Pre-Trials, presented by Monsanto. 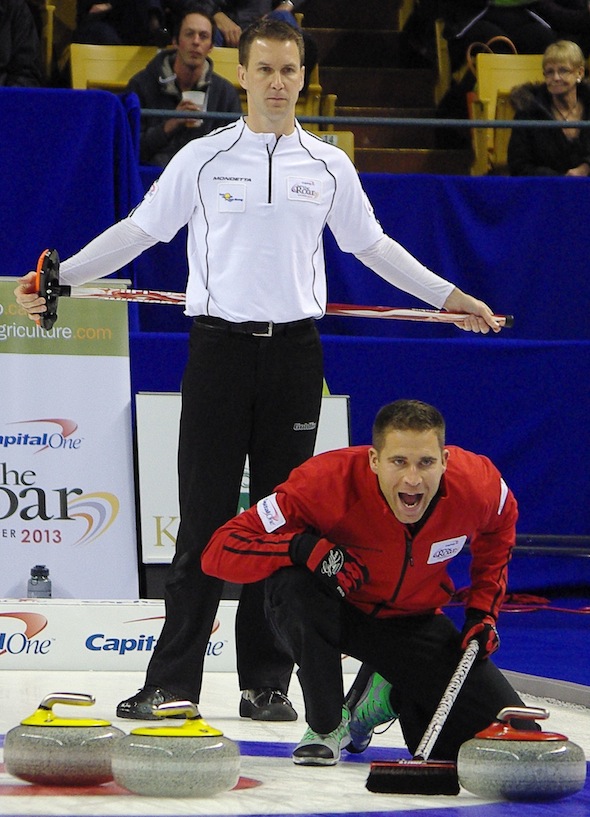 It was battle of skips who’ve claimed the last two Olympic gold medals; Gushue won in 2006 at Turin, Italy, throwing last rocks for a team skipped by Russ Howard, while Morris won in 2010 at Vancouver throwing third rocks for Kevin Martin. The more recent Olympian prevailed on Thursday, thanks to an eighth-end gamble that saw him go hard for the steal while leading 5-3. Looking at two Morris stones in the four-foot, Gushue also decided to gamble, attempting a 15-foot angle-raise double takeout to score. He was just wide, giving the stolen deuce and, in essence the victory to Morris. The victory means Morris will have first-end hammer and choice of rock colour throughout the playoffs, and two cracks at a berth into the 2013 Tim Hortons Roar of the Rings Canadian Curling Trials, presented by Monsanto, Dec. 1-8 at the MTS Centre in Winnipeg — the event that will decide Canada’s representatives for the 2014 Winter Olympics in Sochi, Russia. “Hammer and rocks is good, but you can never think about having two lives because you let the pressure off a bit,” said Morris. “We know we want to win this first one; we’re in a good position because we can choose our rocks (colour), we’re comfortable with the ice, and we’re going to make sure we’re firing in that game.” Morris will play the B-Event winner Saturday at 2 p.m. (all times Eastern), with the winner advancing directly to the Tim Hortons Roar of the Rings. The loser of that game will play the winner of a contest between the two C-Event winners on Sunday for the other Trials berth. Gushue will be back on the ice on Friday at 2 p.m. against reigning Tim Hortons Brier champion Brad Jacobs of Sault Ste. Marie, Ont., in a B-Event semifinal. “We still have some life left; it’s a big advantage we’re giving up right now, but if we can get through the B side, we’ll still have two lives,” said Gushue. “Unfortunately, you drop into playing a Canadian champion, so that’s a little bit of a bummer, too, but we’ve played well against Brad the last couple years. We know if we play the way we can, which is not the way we played tonight, we have a chance to win.” In women’s action, meanwhile, Cathy Auld of Mississauga, Ont., and Renee Sonnenberg of Grande Prairie, Alta., will meet Friday at 9 a.m. for a berth in Saturday night’s Page playoff A-B final against A-Event winner Kelly Scott of Kelowna, B.C., after winning their respective B-Event semifinals on Thursday night. Auld drew to the four-foot for the winning point in the 10th end to beat Val Sweeting of Edmonton 7-6. Auld stole a deuce in the sixth end to shift momentum away from the 2010 Alberta women’s champions. 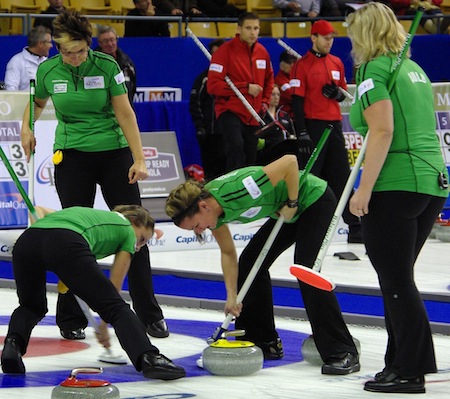 The Cathy Auld team works on a rock during action Thursday night at the Aud. (Photo, CCA/A Sharp Eye Photography)

Sonnenberg, meanwhile, recovered from giving up back-to-back steals in the sixth and seventh ends. In the 10th, the two-time Alberta champion made a delicate board-weight takeout to score a winning deuce for a 7-6 triumph over Tracy Horgan of Sudbury, Ont. Elsewhere, both 2010 silver-medallist Cheryl Bernard of Calgary and Laura Crocker of Edmonton both staved off elimination with crucial C-Event victories. Bernard got off to a fast start with three in the second end and a deuce in the fourth en route to an 11-5 triumph over Winnipeg’s Barb Spencer. Bernard took control by stealing one in the fifth end and put a deuce up in the seventh end and never looked back. Crocker, meanwhile, bounced back from an earlier devastating loss to Auld in which she missed game-winning shots in the 10th and 11th ends. Crocker, who will represent Canada at the Winter Universiade in Trentino, Italy, stole five in the seventh end to beat Krista McCarville of Thunder Bay, Ont., 10-3. Both Spencer and McCarville were eliminated with the losses. The Capital One Road to the Roar continues on Friday with draws at 9 a.m., 2 p.m. and 7 p.m. (all times Eastern). Playoff draws will be broadcast on Saturday and Sunday by TSN/RDS, the official broadcast partner of the Season of Champions. Go to www.curling.ca/championships/television-and-webcast-schedule/ for the schedule. Live scoring, statistics and updated draw brackets are available at www.curling.ca/scoreboard/ The French version of this story will be available at www.curling.ca/2013roadtotheroar-fr/ as soon as possible. To purchase tickets to the 2013 Capital One Road to the Roar, presented by Monsanto, go to www.curling.ca/2013roadtotheroar-en/tickets/ For ticket information about the 2013 Tim Hortons Roar of the Rings, presented by Monsanto, go to www.curling.ca/2013roaroftherings-en/tickets/