Scott first to qualify for playoffs

Kelly Scott and her Kelowna, B.C., team are the first to qualify for the Page playoffs at the Capital One Road to the Roar, presented by Monsanto. With an 8-5 win over Renee Sonnenberg of Grande Prairie, Alta., Scott, along with teammates Jeanna Schraeder, Sasha Carter, Sarah Wazney and coach Brent Giles, are one step closer to the Tim Hortons Roar of the Rings Canadian Curling Trials, presented by Monsanto, Dec. 1-8 in Winnipeg, where eight men’s and eight women’s teams will be vying for the chance to represent Canada at the 2014 Winter Olympics in Sochi, Russia.

Thursday afternoon’s women’s A-Event final at the Memorial Auditorium in Kitchener, Ont., featured the only two undefeated teams, and both showed why, trading well-played ends until the seventh. Then, with two Scott stones in the rings, Sonnenberg had a chance for a double takeout, but her rock barely ticked shot stone and sailed through, leaving Scott with a steal of two and a 6-3 lead. Scott used the hitting power of Carter and Schraeder to keep the house clean from then on, blanking the ninth and hitting out the 10th for the win. “Any time you can steal late in the game, especially a deuce, that does definitely give you an edge, and advantage,” said Scott. “It was not an easy sheet to play finesse shots on, so we definitely got the easier shot selection after we jumped ahead three points. But they did a good job of hanging in there and making us execute those peels or they could have been right back in it.” “Goal number one was to get through to that qualifying round,” added Scott about clinching a playoff spot. “You want to be in that A vs. B game, but that sometimes doesn’t pan out. We couldn’t have scripted a better start to this whole event for ourselves.” With the loss, Sonnenberg and her team of Lawnie MacDonald, Cary-Anne McTaggart, Rona Pasika, alternate Desirée Owen and coach Kurt Balderston move into the women’s B-Event semifinal and will face Tracy Horgan of Sudbury, Ont., on Thursday evening. Also on the ice Thursday afternoon were three teams trying to avoid slipping into sudden-death elimination in the C-Event. Laura Crocker of Edmonton, who lost to Sonnenberg on Wednesday night, lost in an extra end, 7-6 to Cathy Auld of Mississauga, Ont. Despite using her accurate hitting power, sneaking past guards to keep her team ahead until the 10th, Crocker missed a final takeout allowing Auld to steal one in 10, and another in the extra end. 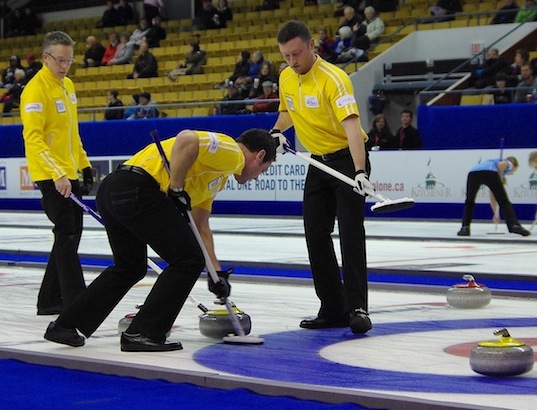 Greg Balsdon, Tyler Morgan and Jamie Farnell in action at the 2013 Capital One Road to the Roar in Kitchener (Photo CCA/A Sharp Eye Photography)

On the men’s side, it was an all-Ontario draw, as Greg Balsdon of Elgin came out on top 8-4 over Joe Frans of Bradford, and Sault Ste. Marie’s Brad Jacobs, the reigning Tim Horton Brier champ, needed an extra end to defeat Mark Keen of Ajax by an 8-7 score. Balsdon had control from the start, forcing Frans to take singles while racking up deuces. In the third end, Frans just ticked a guard on a takeout attempt, allowing Balsdon to steal one. Unable to catch up, Frans conceded after nine and gave Balsdon the 8-4 win. In the only other game, Jacobs was forced to an extra end and had to make a precision draw for an 8-7 win. Leading 6-5 in the eighth, Kean had Jacobs in trouble with five rocks in scoring position. But the skip from Northern Ontario made a delicate tap-back to take one and tie it up. A missed takeout in the ninth gave Jacobs a steal of one and a 7-6 lead to defend coming home. When Kean tied it up, Jacobs was forced to draw the button for the win in the extra end. Kean, Frans and Crocker now move into the C-Event and face elimination with one more loss. The Road to the Roar continues on Wednesday at 7 p.m. (all times EST). Playoff draws will be broadcast on Saturday and Sunday by TSN/RDS, the official broadcast partner of the Season of Champions. Go to https://www.curling.ca/championships/television-and-webcast-schedule/ for the schedule. Live scoring, statistics and updated draw brackets are available at https://www.curling.ca/scoreboard/ To purchase tickets to the 2013 Capital One Road to the Roar, presented by Monsanto, go to https://www.curling.ca/2013roadtotheroar-en/tickets/ For ticket information about the 2013 Tim Hortons Roar of the Rings, presented by Monsanto, go to https://www.curling.ca/2013roaroftherings-en/tickets/