Brad Jacobs is on a roll at the Capital One Road to the Roar Pre-Trials, presented by Monsanto. Jacobs’ team from Sault Ste. Marie, Ont., won its third straight game on Friday afternoon at the Memorial Auditorium in Kitchener, Ont., and now sits one victory away from the Page playoffs.

Brad Jacobs watches sweepers Ryan Fry and E.J. Harnden in action at the Capital One Road to the Roar in Kitchener (Photo CCA/A Sharp Eye Photography)

“We did what we needed to do,” said Jacobs, whose Tim Horton Brier championship team earned a spot in the B-Event final of the Capital One Road to the Roar by defeating Brad Gushue of St. John’s, N.L., 9-3. “It’s a good feeling. We kind of started off pretty terribly (a crushing 10-9 loss to Greg Balsdon of Elgin, Ont., on Tuesday. “But we ran off three wins in a row and we’re building confidence with each win.” Jacobs and Gushue, among the pre-event favourites battled it out for eight ends until Jacobs broke it open with a score of four in the ninth end. “We were taught at an early age to fight, no matter what, never give up,” Jacobs said about finding the resilience to cope with the loss to Balsdon. “The good teams bounce back. We want to be a good team and bounce back, and I think we show that on a fairly consistent basis.” “Coming through B is the next best thing, you might not have hammer, but two chances (in the playoffs) is huge,” added Jacobs, who along with teammates Ryan Fry, E.J. Harnden, Ryan Harnden and coach Tom Coulterman will face Steve Laycock of Saskatoon in the B-Event final Friday at 7 p.m. (all times Eastern). “We’re going to be giving it everything we’ve got tonight.” The winner of the B-Event final will take on John Morris, representing Kelowna and Vernon, B.C., in Saturday’s 2 p.m. Page playoff A-B final, which decide the first men’s qualifier for the Tim Hortons Roar of the Rings Canadian Curling Trials, Dec. 1-8 at the MTS Centre in Winnipeg, where Canada’s representatives for the Sochi Winter Olympics will be decided. Gushue, Brett Gallant, Adam Casey, Geoff Walker and coach Peter Gallant must now climb back through the C-Event, facing the winner of the Friday night match-up between Jake Higgs of Glencoe, Ont., and Joe Frans of Bradford, Ont. On the women’s side, the dream of chasing Olympic glory at the Tim Hortons Roar of the Rings evaporated for three teams who were eliminated from competition with their third loss. Crystal Webster just couldn’t get her final rock to stick in a messy 10th end against fellow Calgarian Cheryl Bernard. Steals in the fifth and 10th gave Bernard, the 2010 Olympic silver-medallist, the edge, and she hung on for the 5-3 win. 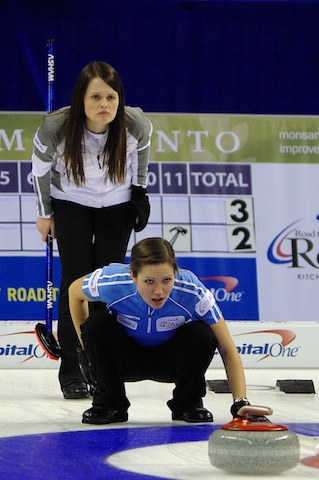 “It was a tricky sheet of ice,” said a relieved Bernard after the game. “It was kind of who made the least amount of mistakes, not who made the most shots. It’s one game at a time still. I think we’re starting to figure out how to make shots and it feels really good.” Bernard, supported by teammates Susan O’Connor, Lori Olson-Johns, Shannon Alesksic, alternate Carolyn McRorie and coach Dennis Balderston, will play Cathy Auld of Mississauga, Ont., in one C-Side semifinal on Friday night. Calgary’s Shannon Kleibrink, the 2006 Olympic bronze-medallist, also saw her Olympic dream dashed, losing to Edmonton’s Val Sweeting 8-3. Leading 7-2 in the eighth, Sweeting kept it simple, allowing Kleibrink to take one, then executing a clean double to put the game away in the ninth. Sweeting now plays Tracy Horgan of Sudbury, Ont., who defeated Edmonton’s Laura Crocker 7-5 in the other C-Event semifinal. The Capital Road to the Roar continues on Friday at 7 p.m. Playoff draws will be broadcast on Saturday and Sunday by TSN/RDS, the official broadcast partner of the Season of Champions. Go to https://www.curling.ca/championships/television-and-webcast-schedule/ for the schedule. Live scoring, statistics and updated draw brackets are available at https://www.curling.ca/scoreboard/ The French version of this story will be available at https://www.curling.ca/2013roadtotheroar-fr/ as soon as possible. To purchase tickets to the 2013 Capital One Road to the Roar, presented by Monsanto, go to https://www.curling.ca/2013roadtotheroar-en/tickets/ For ticket information about the 2013 Tim Hortons Roar of the Rings, presented by Monsanto, go to https://www.curling.ca/2013roaroftherings-en/tickets/ Click here to see post-game interviews with Brad Jacobs and Cheryl Bernard.