Renee Sonnenberg of Grande Prairie, Alta., is one win away from a dream. Sonnenberg battled back after struggling much of the game to defeat Cathy Auld of Mississauga, Ont., 10-7 at the 2013 Capital One Road to the Roar Pre-Trials, presented by Monsanto, in the women’s B-Event final on Friday morning in Kitchener, Ont.

Sonnenberg will now meet Kelly Scott in the Page playoff A-B game Saturday at 7 p.m. (all times Eastern) in her effort to secure a spot in the Tim Hortons Roar of the Rings Canadian Curling Trials, presented by Monsanto, Dec. 1-8 in Winnipeg, where eight men’s and eight women’s teams will be vying for the chance to represent Canada at the 2014 Winter Olympics in Sochi, Russia. Auld and her team of Janet Jesty-Murphy, Stephanie Matheson, Melissa Foster, alternate Clancy Grandy and coach Delores McCallum had been quietly making their way through the draw after losing their first game to Scott in the opening draw. On Friday morning, Auld had Sonnenberg in trouble repeatedly. After giving up a steal two in the fifth and falling behind 6-3, Sonnenberg, backed by teammates Lawnie MacDonald, Cary-Anne McTaggart, Rona Pasika, alternate Desirée Owen and coach Kurt Balderston, drew the four foot for the single in six to start her comeback. Ahead by one in the 10th, Sonnenberg clogged up the four-foot, leaving Auld a difficult in-off to tie, but Auld’s rock rolled too far, giving the team from Alberta two more points and the victory. “We were getting beat,” said an emotional Sonnenberg after the game. “We had to take some risks. And it kind of worked brilliantly for us because we were going to lose if we didn’t do something. So we finished up incredibly strong.” “We made some more precise draws and put more pressure on them,” she said. “The first three quarters of the game we were chasing them a lot. So we turned that tide, took some risks early by setting up guards and leaving their counters in. They started having to chase us, and it panned out.” “I won’t lie, I went there before the Scott game (the A-Event against Kelly Scott of Kelowna, B.C., on Thursday afternoon),” said Sonnenberg about looking ahead to the possibility of going to Winnipeg for the Tim Hortons Roar of the Rings in December. “You think, ‘Women’s A-B game, Saturday night on TSN,’ but when I was out there, it was just, ‘this is so cool.’ The arena, the curling ice, the great teams – it’s what I’ve played twenty-five years for.” Auld moves to the C-Event and will have another chance on Friday evening to get through to the playoffs. 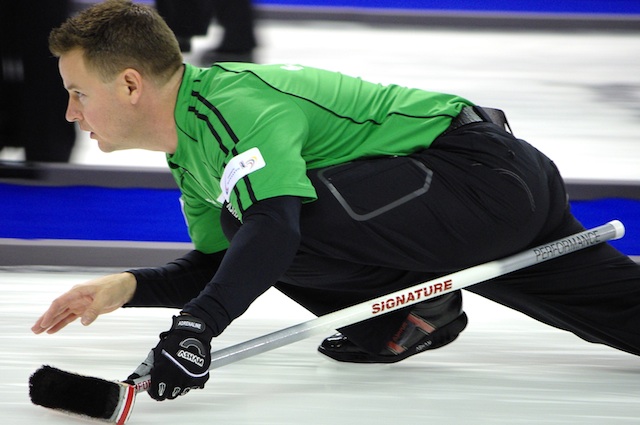 In men’s action, Steve Laycock of Saskatoon stole a point in the 10th end to defeat Greg Balsdon of Elgin, Ont., 7-6 and move on to the B-Event final against the winner of Friday afternoon’s match-up between Brad Gushue of St. John’s, N.L., and Brad Jacobs of Sault Ste. Marie, Ont. Balsdon moves into the C-Event and will play on Saturday morning for another chance to get to the playoffs. Two men’s teams were eliminated from the competition on Friday morning. Bryan Cochrane of Ottawa is out after losing to Rob Fowler of Brandon, Man., 6-4. Fowler will play Saturday morning against Jean-Michel Ménard St-Romuald, Que., who eliminated local favourite Rob Rumfeldt of Guelph, Ont., after stealing a single for the 5-3 win. “We’ve got four to win, so we’re up to one at a time, like the good old cliché,” said Ménard. “That’s our first one.” “We played our first game of the spiel against Bryan Cochrane, and we really played a strong outing. Next two games against Gushue and Mark Kean we didn’t really play well, so our morale was a little low, so it was good to come out and play a good game against Rob Rumfeldt, a team we’ve always been struggling against. It was a little confidence booster.” The Road to the Roar continues on Friday with draws at 2 p.m. and 7 p.m. Playoff draws will be broadcast on Saturday and Sunday by TSN/RDS, the official broadcast partner of the Season of Champions. Go to https://www.curling.ca/championships/television-and-webcast-schedule/ for the schedule. Live scoring, statistics and updated draw brackets are available at https://www.curling.ca/scoreboard/ To purchase tickets to the 2013 Capital One Road to the Roar, presented by Monsanto, go to https://www.curling.ca/2013roadtotheroar-en/tickets/ For ticket information about the 2013 Tim Hortons Roar of the Rings, presented by Monsanto, go to https://www.curling.ca/2013roaroftherings-en/tickets/