Sweeting reaches playoffs at Capital One Road to the Roar

Edmonton’s Val Sweeting is two wins away from a trip to Winnipeg to play in Canada’s most important curling event. Sweeting claimed a berth in the Page playoffs on Friday night at the Memorial Auditorium in Kitchener, Ont., beating Tracy Horgan of Sudbury, Ont., 5-3 in one of a pair of women’s C-Event finals at the Capital One Road to the Roar Pre-Trials, presented by Monsanto. 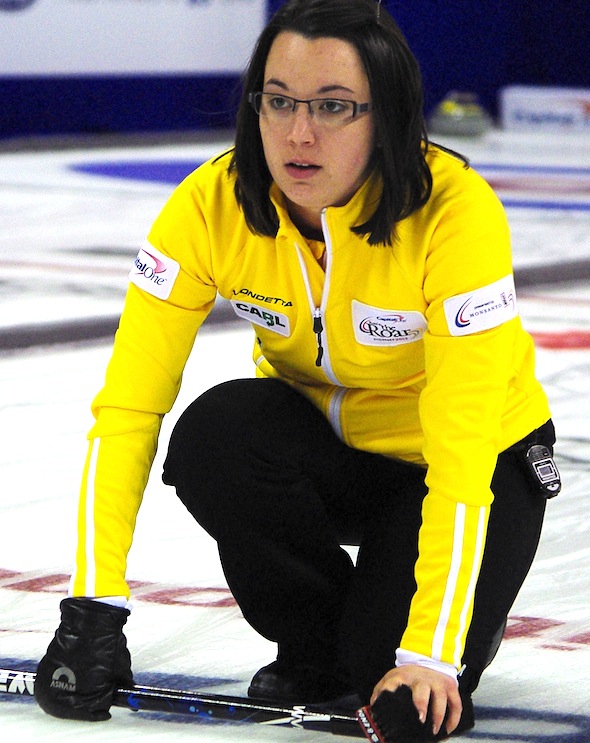 Edmonton’s Val Sweeting won a C-Event final at the Capital One Road to the Roar on Friday night. (Photo, CCA/A Sharp Eye Photography)

With the win, Sweeting, vice-skip Dana Ferguson, second Joanne Courtney, lead Rachelle Pidherny and coach Taina Smiley advance to the Page playoff C-vs.-C game on Saturday at 9 a.m. against 2010 Olympic silver-medallist Cheryl Bernard of Calgary. Sweeting, the 2010 Alberta champ, had a tight game going with Horgan, who represented Ontario at the 2012 Scotties Tournament of Hearts, through six ends. But with Horgan holding a slim 2-1 lead, Sweeting was able to make a clutch come-around outturn hit to score a game-changing three, and never looked back, although she needed to make a delicate tap with her final rock of the 10th end to nail down the win. “It feels great,” said Sweeting, 26. “We played really well today and we want to keep it up tomorrow and put ourselves in a position today. That’s what we did today. The team played really well, so to come out on top is confidence-boosting for sure.” Bernard, meanwhile, prevailed 10-8 in an extra end over Cathy Auld of Mississauga, Ont., in a topsy-turvy affair that saw Bernard race to a 5-2 lead through four ends, then fall behind 8-6 through nine. But Bernard made a spectacular triple takeout to score a game-tying deuce in the 10th, and then stole the winning pair in 11 when Auld was wide on her game-winning draw to bite the button. The winner of the Sweeting-Bernard game will move into Sunday’s 2 p.m. (all times Eastern) qualifying game for the Tim Hortons Roar of the Rings Canadian Curling Trials, presented by Monsanto, Dec. 1-8 at the MTS Centre in Winnipeg — the event that will decide Canada’s teams for the 2014 Winter Olympics in Sochi. “We were definitely here to win,” said Sweeting. “We’re in a position to do that, so we have definitely met our expectations.” 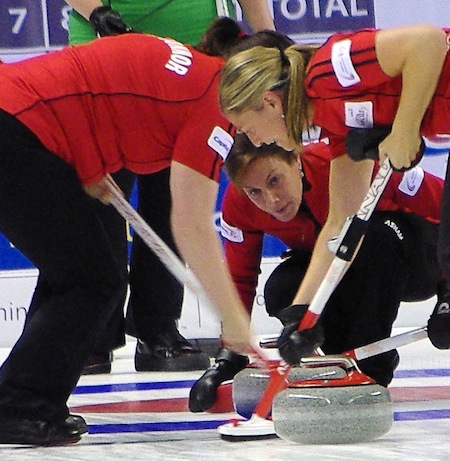 The first women’s Trials qualifier will be decided Saturday at 7 p.m. between A-Event winner Kelly Scott of Kelowna, B.C., and B-Event winner Renée Sonnenberg of Grande Prairie, Alta. The loser of that game will play the Sweeting-Bernard winner. In men’s play, meanwhile, reigning Tim Hortons Brier champ Brad Jacobs of Sault Ste. Marie, Ont., ran his win streak to four games on Friday night with a 9-6 win over Saskatoon’s Steve Laycock in the B-Event final. That set up a tantalizing Page playoff A-B game Saturday at 7 p.m. against A-Event winner John Morris and his Kelowna/Vernon, B.C., team. Jacobs took control of his game Friday night by scoring three in the fifth end, and then took advantage of a Laycock miscue in the ninth to score a deuce out of thin air. “Mission accomplished,” said Jacobs. “We’re in that A-B game, we have two shots to go to the Trials. We really came out and played well today, and we got a few breaks honestly. But sometimes you need those breaks to get the wins, and we’ll take it.” In C-Event play, meanwhile, Jake Higgs of Glencoe, Ont., stole a big deuce in the eighth end — the turning point in an 8-7 win over Joe Frans of Bradford, Ont. Higgs advanced to a C-Event semifinal clash with 2006 Olympic gold-medallist Brad Gushue of St. John’s, N.L., while Frans was eliminated with the loss. To see interviews with Sweeting and Jacobs, click here. The Capital One Road to the Roar continues on Saturday with draws at 9 a.m., 2 p.m. and 7 p.m. Playoff draws will be broadcast on Saturday and Sunday by TSN/RDS, the official broadcast partner of the Season of Champions. Go to www.curling.ca/championships/television-and-webcast-schedule/ for the schedule. Live scoring, statistics and updated draw brackets are available at www.curling.ca/scoreboard/ The French version of this story will be available at www.curling.ca/2013roadtotheroar-fr/ as soon as possible. To purchase tickets to the 2013 Capital One Road to the Roar, presented by Monsanto, go to www.curling.ca/2013roadtotheroar-en/tickets/ For ticket information about the 2013 Tim Hortons Roar of the Rings, presented by Monsanto, go to www.curling.ca/2013roaroftherings-en/tickets/