Renée Sonnenberg will get a chance to make a name for herself on Canadian curling’s most important stage. Long respected as one of the top skips in Alberta, Sonnenberg, 42, claimed her biggest victory to date on Saturday night at the Memorial Auditorium in Kitchener, Ont., at the Capital One Road to the Roar Pre-Trials, presented by Monsanto.

With a 12-4 triumph over former world champ Kelly Scott of Kelowna, B.C., in the Page playoff A-B game, Sonnenberg’s team from Grande Prairie, Alta. — third Lawnie MacDonald, second Cary-Anne McTaggart, lead Rona Pasika, alternate Desirée Owen and coach Kurt Balderston — is headed to Winnipeg for the Tim Hortons Roar of the Rings Canadian Curling Trials, presented by Monsanto, Dec. 1-8 at the MTS Centre in Winnipeg. That event will decide who represents Canada at the 2014 Winter Olympics in Sochi, Russia. “Being able to go to Winnipeg is great, but just to finally put together a great game and totally enjoy the moment and be relaxed in a really high-pressure situation is what I’m most proud of today,” said Sonnenberg, who will be making her Trials debut after representing Alberta at two Scotties Tournaments of Hearts. “I love curling in Winnipeg (she won her only Grand Slam event there in 2011), and on arena ice, in front of a huge crowd against those phenomenal teams — it’s what every curler dreams of.” The teams were tied 3-3 through five ends, but Sonnenberg — who’d lost the A-Event final to Scott on Thursday afternoon — had taken back the hammer thanks to a steal of one in the first end when Scott was heavy on a draw to backing, and a deuce in the fourth end. Scott, meanwhile, had settled for singles in the second, third and fifth ends. In the sixth, though, Sonnenberg was able to get two rocks buried in the four-foot, and was sitting three. Scott tried a corner freeze to cut Sonnenberg to a deuce, but she bumped partially into the open, leaving Sonnenberg the tap for the game-breaking four. “It made a huge difference for our team, but at that point we were not going to let up one bit,” said Sonnenberg, who added insurance with a double takeout to score three in the eighth end. “We’ve seen a million comebacks this week, so we weren’t going to give up and inch.  We didn’t and we’re very proud of ourselves.” 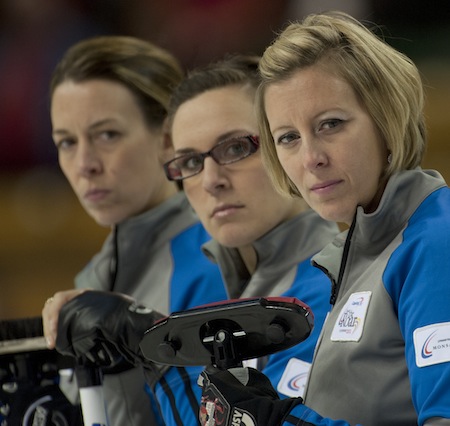 Scott has another chance to nail down her third straight trip to the Trials; she’ll take on Edmonton’s Val Sweeting on Sunday at 2 p.m. (all times Eastern) in a Trials qualifying game. Sweeting advanced to that game by beating 2010 Olympic silver-medallist Cheryl Bernard of Calgary 9-7 in the Page playoff C-C game earlier on Saturday. “We’ll go back and talk about it, figure out the sheet, figure out what we’re going to do about our rocks and come out sharp (Sunday),” said Scott, who’s backed up by third Jeanna Schraeder, second Sasha Carter, lead Sarah Wazney and coach Brent Giles. “We bounce (back) pretty good. We even said that coming into this game — regardless of the outcome, let’s not let it rattle us. And given the outcome of our performance, I think that’s one we just want to park.” To see interviews with Sonnenberg and Scott, click here. The Capital One Road to the Roar continues on Sunday, the final day, with draws at 9 a.m., 2 p.m. and 7 p.m. (all times Eastern). All three draws will be broadcast Sunday. Go to www.curling.ca/championships/television-and-webcast-schedule/ for the schedule. Live scoring, statistics and updated draw brackets are available at www.curling.ca/scoreboard/ The French version of this story will be available at www.curling.ca/2013roadtotheroar-fr/ as soon as possible. To purchase tickets to the 2013 Capital One Road to the Roar, presented by Monsanto, go to www.curling.ca/2013roadtotheroar-en/tickets/ For ticket information about the 2013 Tim Hortons Roar of the Rings, presented by Monsanto, go to www.curling.ca/2013roaroftherings-en/tickets/