The young guns from Edmonton will get one more shot after an exciting last-end steal on Saturday morning in Kitchener. Edmonton’s Val Sweeting is a win away from becoming one of the eight women’s teams heading to the Tim Hortons Roar of the Rings Canadian Curling Trials, presented by Monsanto, Dec. 1-8 at the MTS Centre in Winnipeg, to battle it out for the right to represent Canada at the 2014 Olympic Winter Games in Sochi, Russia.

Sweeting, backed by teammates Dana Ferguson, Joanne Courtney, Rachelle Pidherny and coach Taina Smiley, claimed a berth in Sunday’s 2 p.m. (all times Eastern) Trials qualifier at the Memorial Auditorium in Kitchener, Ont., after beating 2010 Olympic silver-medallist Cheryl Bernard of Calgary in the C-C playoff at the Capital One Road to the Roar Pre-Trials, presented by Monsanto. Bernard gave up a steal of one in the sixth when her attempt at a raise takeout rolled too far, but she fought back with a deuce in seven to even the score at 5-5. Facing two Bernard counters with her last, Sweeting’s takeout attempt rolled out, allowing a steal of two. In the final end, tied 7-7, the same scenario replayed – in reverse. This time, Bernard had a shot for the win, but she rolled too far, allowing Sweeting to steal two for the win. “I felt like a cat out there with nine lives,” said Sweeting afterwards. “We had a couple of chances, but they had some chances to put the game away. The steal was unfortunate, but we knew we could battle back. Get our deuce back and keep it close, and that’s what we did.” Sweeting will take on either Kelly Scott of Kelowna, B.C. or Renée Sonnenberg, of Grande Prairie, Alta. Those two teams will play in the first Trials qualifying game Saturday at 7 p.m., with the winner going to Winnipeg and the loser facing Sweeting on Sunday. “We’ve never been in this position before,” said Sweeting, who skipped Team Alberta at the 2010 Scotties Tournament of Hearts. “It feels good to be one game away. We’re still in it and it’s totally in our control. We’ve just got to play well.” 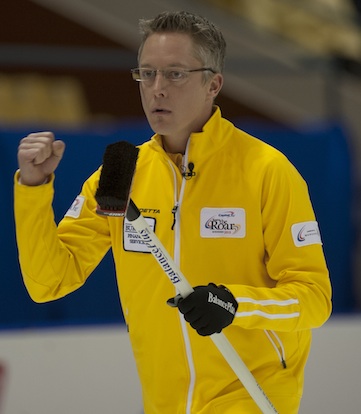 “The fans have been great out there,” she said about the noisy crowd in the Kitchener Memorial Auditorium on Saturday morning. “Great energy, and it just keeps us going.” In men’s C-Event semifinals, Brad Gushue of St. John’s, N.L., powered his way to an 11-4 win over Jake Higgs of Glencoe, Ont. The 2006 Olympic gold medallist went up 5-0 after scoring three in the first and stealing two more when Higgs’s final draw slid too far. The loss eliminated Higgs from competition. Gushue now faces Greg Balsdon of Elgin, Ont., in one of the C-Event finals at 2 p.m. Saturday. In an all-Ontario playoff, Balsdon controlled the game most of the way over Mark Kean of Ajax, winning 9-7. “We felt like we were playing well, making a lot of shots,” said Balsdon. “They had a lot of chances to put it to us. In the seventh, Mark came a little heavy on a draw to let me get out of it, and we only gave up one.” “The ice was great, and I felt the guys were making a lot of shots out there,” he said. “One game at a time.” Rob Fowler of Brandon, Man., defeated Jean-Michel Ménard of St-Romuald, Que., by a score of 6-4 and moves on to the C-Event final against Steve Laycock of Saskatoon, who lost 9-6 to Brad Jacobs on Friday night in the B-Event final. With the loss, Ménard, the 2006 Tim Hortons Brier champion is eliminated from the competition. Click here to see post-game interviews with Val Sweeting and Greg Balsdon. The Capital Road to the Roar continues on Saturday at 2 p.m. and 7 p.m. (all times EST). Playoff draws will be broadcast on Saturday and Sunday by TSN/RDS, the official broadcast partner of the Season of Champions. Go to https://www.curling.ca/championships/television-and-webcast-schedule/ for the schedule. Live scoring, statistics and updated draw brackets are available at https://www.curling.ca/scoreboard/ The French version of this story will be available at https://www.curling.ca/2013roadtotheroar-fr/ as soon as possible. To purchase tickets to the 2013 Capital One Road to the Roar, presented by Monsanto, go to https://www.curling.ca/2013roadtotheroar-en/tickets/ For ticket information about the 2013 Tim Hortons Roar of the Rings, presented by Monsanto, go to https://www.curling.ca/2013roaroftherings-en/tickets/