The 51st edition of the Canadian Mixed Curling Championship officially gets underway Saturday at the Rideau Curling Club in Ottawa. 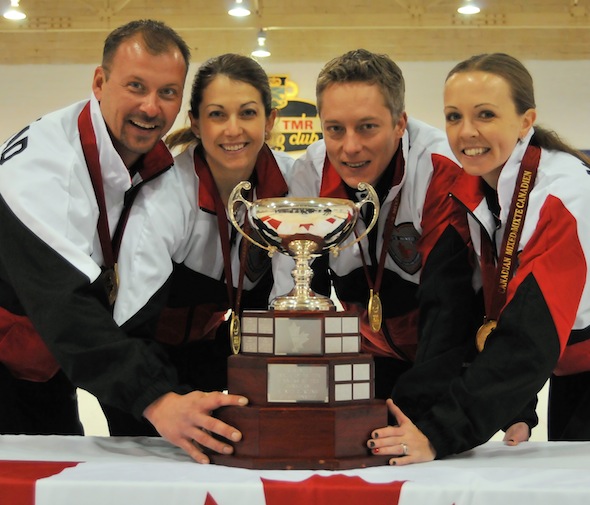 However, prior to that, on Thursday and Friday, there will be a four-team double-knockout qualifying round to determine which two teams among Northwest Territories, Yukon, Nunavut and Newfoundland/Labrador, representing the bottom four finishers at last year’s Canadian Mixed in the Town of Mount Royal, Que., advance to the 12-team main draw. The round robin, which begins on Saturday at 7:30 p.m. (all times Eastern), will be followed by three draws daily Sunday through Thursday (at 10 a.m., 2:30 p.m. and 7 p.m.), with a final draw on Friday morning prior to any required tiebreakers and playoffs (click here for the complete draw). The first-place team advances directly to the final on Saturday, Nov. 23, at 2 p.m. while the second- and third-place teams meet in a semifinal on Friday evening to determine the other finalist. If two or more tiebreakers are required, the semifinal will be played Saturday morning. The winning team will earn two berths (two two-person teams) into the Canadian Mixed Doubles Trials, slated for March 19-23 (location to be announced). The winner of this 32-team competition will then represent Canada at the World Mixed Doubles, April 22-29 in Dumfries, Scotland. Among the competing teams at this year’s Mixed are the defending champions from Ontario, skipped by Cory Heggestad of the Orillia Curling Club. Last year, Ontario defeated Nova Scotia, 10-3 in the final. Heggestad’s team returns intact, with Heather Graham at third, Greg Balsdon at second and Amy Balsdon (Mackay) at lead. Other skips include Manitoba’s Sean Grassie, who won the 2009 Mixed in Iqaluit and went on to a bronze medal at the World Mixed Doubles; Nova Scotia’s Rob Harris, who played second for skip Mark Dacey when winning the 2002 Mixed and 2004 Brier and other Brier veterans such as Rod MacDonald of Prince Edward Island, Steve Moss of Northwest Territories and Gary Oke of Newfoundland/Labrador. Alberta and Saskatchewan lead all provinces/territories with nine Mixed crowns each, while Manitoba has eight wins. Host Ontario has won three times. Every province, plus Northern Ontario, has won at least one Canadian Mixed title since the competition began in 1964 in Toronto. Over the years, the Mixed has been won by such other well-known curlers as Jeff Stoughton, Rick Folk, Rick Lang, Kevin Koe, Mark Nichols, Colleen Jones, Peter Gallant, Barry Fry, Robert Campbell, Paul Flemming, Jean-Michel Ménard, Susan O’Connor and Shannon Kleibrink, who became the first, and so far, only female to win the Mixed as skip, in 2004 in Timmins, Ont. Saskatchewan’s Larry McGrath is the only three-time winning skip, having won the Mixed in 1967, 1968 and 1971. For the qualifying round beginning on Thursday at the Rideau, top-seeded Northwest Territories (1) plays Newfoundland/Labrador (4) while Yukon (2) meets Nunavut (3), with both games at 2 p.m.. The two winners then meet at 7 p.m. to determine the first qualifier (Q1). The two first-round losers also play at the same time to determine who advances to meet the loser of the first qualifier game on Friday at 2 p.m., when the second team (Q2) for the Mixed will be decided. Attached are the roster and draw. Draw scores/results will be immediately available on the Canadian Curling Association’s website, www.curling.ca. For rosters of the competing teams, click here.