There’s no ice at the Griffiths Seniors Centre in Black Diamond, but the curlers could care less. They’re floor curling – no ice required. 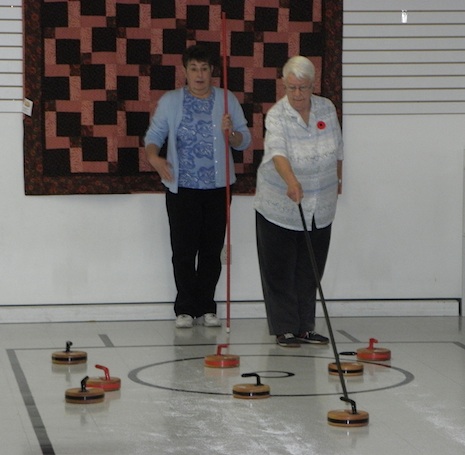 The curlers slide wooden rocks across a freshly waxed floor, and hopefully the rock ends up where the skip requests, just as in a regular curling game. Floor curling is almost identical to the more familiar on-ice curling, but there are no sweepers and an eight-end game usually takes less than an hour. According to League Coordinator Eileen Brownell, the floor curling league in Black Diamond has been running for at least 30 years. Brownell came to participate eight years ago at the urging of a friend. Never having ice curled, she is now hooked on the popular off-ice option. She floor curls twice a week: in Black Diamond on Wednesdays and in the nearby town of Turner Valley on Mondays at the Valley Neighbours Club. According to Brownell there are many factors that keep more than 50 (including spares) floor curlers coming back each year: “They come for the camaraderie and it’s a lot of fun. It gets people out and about.” Brownell admits she enjoys winning “just as much as the next guy” but it’s “more about the friendly competition.” She says the option is a very safe alternative to ice curling and great for the over-50 crowd in particular. “It gives people an aim, a goal, a reason to get out of the house… You can be down in the dumps at home but if you come down for a game it always lifts the spirits,” she says. Participants in the floor curling league range in age from 50-93. Whereas the fear of slipping and falling might deter some seniors from taking up the sport of regular curling on ice, floor curling provides the same competitive – and friendly – experience in a more accessible form. Individuals who cannot crouch down to throw, or who are in wheelchairs, can use a push stick to throw their “rock”, making the game adaptable to each curler’s comfort level. “There is a great turnout,” says Brownell about the enthusiasm of the participants. “Even when it’s storming (outside).” Floor curling participant and league Draw Master Dave Parsons started ice curling at the age of 12 but he had to give up the game he loved and had been very competitive at by the age of 60. “I love curling but my knees got too bad and I had to stop,” says Parsons. He recalls his competitive career fondly and is grateful for having found the variation of floor curling. Parsons enjoys the sport so much he also plays in a floor curling league on Mondays in the nearby town of Turner Valley at the Valley Neighbours Club, just as Brownell does. He actually started floor curling there five or six years ago and soon decided to add the Wednesday program in Black Diamond to his weekly schedule. As Draw Master, Parsons handles the floor curling schedule just like any curling club would. He creates a series of 12-team square draws and holds a championship at the end of the season. “There’s even a brand new trophy this year,” he says. You won’t find the cash prizes sometimes found at curling clubs at the end of a league but that’s for a good reason. At $10 – $15 for a three-month season, floor curling manages to be even more economical than the on-ice version. And competitive opportunities are beginning to emerge, too. The sport will be featured in the 2014 55+ Canada Games to be held in Strathcona County, Alberta. “It’s still competitive, it is exercise, (and) it’s an outing,” says Parsons, listing the reasons floor curling is such a great option for seniors. “You meet lots of people you might not otherwise meet. And it’s fun!” 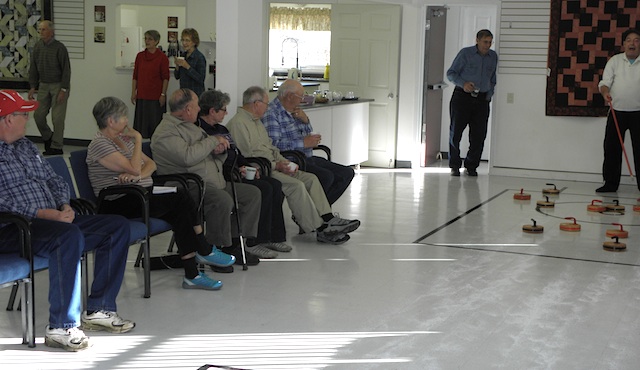