Newfoundland/Labrador skip Gary Oke emerged from the Pre-Qualifying round with a hard fought 7-5 extra end win over the Yukon’s Bob Smallwood and a berth in the main round robin at the Canadian Mixed Curling Championship Thursday at the Rideau Curling Club in Ottawa. 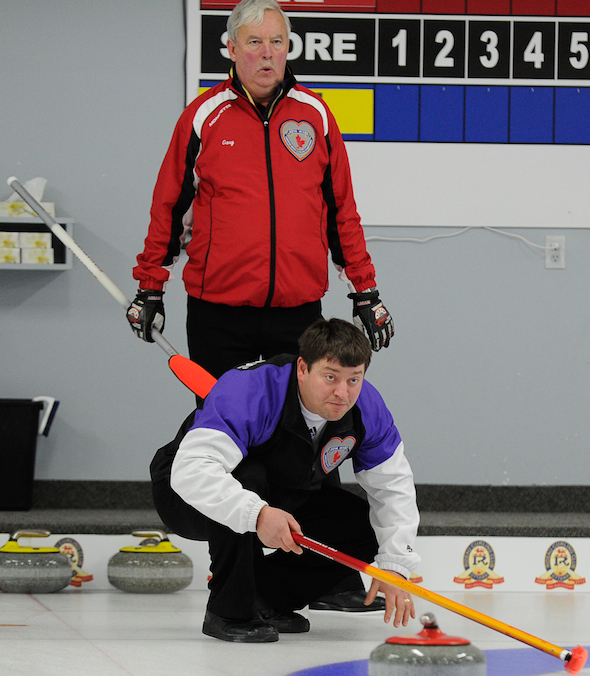 The main round robin draw is scheduled to begin at Saturday at 7:30 p.m. (all times Eastern). The game see-sawed through nine ends with the score 5-4 for Oke, but with last-stone advantage in the 10th end belonging to Smallwood. The Whitehorse foursome played a flawless end until Smallwood’s last stone needing just a simple hit and stay to win the game. He was a touch wide, rolling out, and tying the game at five. In the extra end, facing two Newfoundland/Labrador counters, Smallwood tried to bury a stone around a guard but was heavy, giving Oke the win without having to deliver the last stone. Oke’s team from the Corner Brook CC — third Susan Curtis, second Terry Oke, and lead Sigrid Fitzpatrick — will now be the 11th team in the main event. Smallwood, backed up by third Tamar Vandenberghe, second Adam Pleasant and lead Jody Smallwood, now face the Northwest Territories’ Steve Moss in tomorrow’s second Pre-Qualifying final at 2 p.m.  Moss is joined by Yellowknife clubmates Ashley Green, Rosh Begg and Debbie Moss. The winner is in and the loser eliminated. Moss stole singles in the seventh and eighth ends en route to a 6-2 win over Nunavut’s Ed Sattelberger.  The Territories led 4-1 through six ends, but Sattelberger  just missed on a double-takeout to score a potentially game-tying three. The Iqaluit foursome scored a single in the eighth but couldn’t force the issue in the ninth, giving up two points for a 6-2 NWT lead which is how the game ended. Sattelberger’s squad of Chantelle Masson, Dennis Masson and D’Arcy Masson has been eliminated from further play. Live scoring can be viewed www.curling.ca/scoreboard/ The Official Mixed web site can be found at www.curling.ca/2014mixed-en/ and the host committee’s web page is www.canadianmixed.com/