Ontario’s Cory Heggestad began the defence of his win at the Canadian Mixed Curling Championship last November in Montréal with a solid opening round 4-2 victory over Sylvie Robichaud’s New Brunswick foursome at this year’s edition in Ottawa at the Rideau CC. Despite the low score, it was a well-played game. The key for Heggestad was a steal of one in the seventh to go up 3-1. Robichaud was forced to score one in the eighth after Heggestad made a nice double takeout eliminating two New Brunswick counters.

The ninth end was blanked. In the final end, Robichaud tried to freeze to an Ontario counter in the back of the four foot, but she touched a stone in the top eight foot area coming up short of counting. Heggestad did not have to throw his final stone. Heggestad’s Orillia-based team of third Heather Graham, second Greg Balsdon and lead Amy Balsdon is intact from their win last year. Mike Fournier of the Glenmore CC in Montréal – last year’s third-place finisher at the Canadian Mixed – opened with a victory over Darren Moulding of Alberta, who ironically lost the 2003 Canadian Junior Championship final to Steve Laycock in the same building. Fournier led 3-2 at the fifth end break only to lose that lead when Moulding scored a deuce in the sixth end and then stole a single in the seventh. Fournier jumped back in the lead in the eighth end with three points and a 6-4 lead. Fournier kept the pressure on with a steal of one in the ninth for a three point lead. Moulding did have a chance to tie the game in the last end with a cross-the-house double takeout attempt but did not make it. The final score was 7-5. 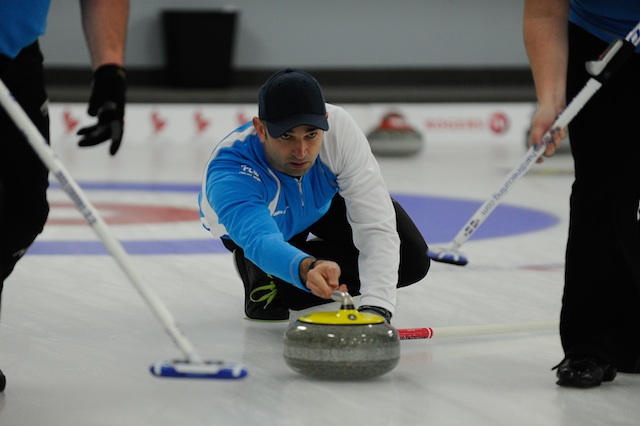 Mike Fournier of the Glenmore CC in Montréal – last year’s third-place finisher at the Canadian Mixed – opened with a victory over Darren Moulding of Alberta (Claudette Bockstael, Studio C Photography)

In a prairie battle, 2009 Canadian Mixed champion Sean Grassie of Deer Lodge CC in Winnipeg was on the wrong side of the ledger in his first-round game against a strong Saskatchewan foursome skipped by Shaun Meachem of the Swift Current CC. Meachem scored two in the opening end and stole one in the second. Grassie took one in the third and then stole singles in both the fourth and xith ends to tie the game at three points. Saskatchewan managed a single in the seventh, only to see Grassie finally grab the lead with two in the eighth. Meachem replied with a deuce of his own to lead 6-5 coming home. Grassie’s foursome could not manufacture any offence in the final end, forcing the Manitoba skip to attempt to navigate a small whole between guards to score one. Instead, he wrecked, leaving Saskatchewan with a steal of four and a 10-5 win. In other games in Saturday’s first draw, PEI’s Rod MacDonald was a convincing winner scoring four in the first end and then stealing three more in the second end in a 12-5 thrashing of Keith Switzer’s Vancouver CC squad representing British Columbia. Teams with first round byes include, Nova Scotia, Northwest Territories, Newfoundland & Labrador and Northern Ontario. Round-robin games continue until Friday morning. The semifinal will be played that day at 7:30 p.m. with the Championship Final at 2 p.m. on Saturday, Nov. 23. Live scoring can be viewed www.curling.ca/scoreboard/ The Official Mixed web site can be found at www.curling.ca/2014mixed-en/ and the host committee’s web page is www.canadianmixed.com/