Saskatchewan’s Shaun Meachem upped his record to 2-0 at the Canadian Mixed Curling Championship at the Rideau CC in Ottawa on Sunday, defeating Nova Scotia’s Rob Harris 9-6 in an entertaining match in Draw 3. 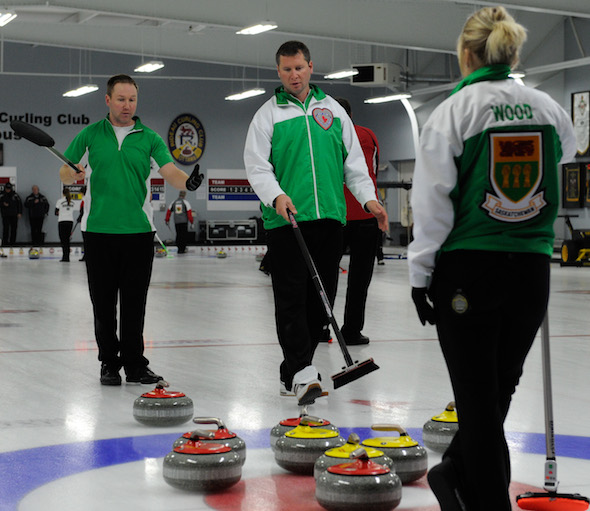 With the score 2-1 for Saskatchewan playing the fourth end, Harris and his Mayflower CC (Halifax) team scored three points to go ahead 4-2. Meachem replied with two points in the fifth to knot the game at four each at the break. The team exchanged singles in the sixth and eighth ends sandwiched around a blanked seventh end. The ninth end featured Meachem working hard at stealing points while Harris was hoping to score two. Saskatchewan third Kelly Wood, a two-time Olympian for Great Britain, executed a double takeout and when Harris missed his first stone, Meachem drew under cover to the top of the four-foot. Harris needed the button to score a single but was happy enough when his final stone stopped for second shot and a steal of only one for Saskatchewan. Down one coming home with the hammer is not a bad situation; however, the Nova Scotians couldn’t manufacture a winning pair. Harris was left with a raise double takeout to hopefully score the tying point. He wasn’t successful, giving up a steal of two for a 9-6 final. The Swift Current foursome of Meachem, Wood, Carl deConinck Smith and Kelsey Dutton will meet neighbouring Alberta in Sunday night’s draw. Nova Scotia’s record is 1-1. 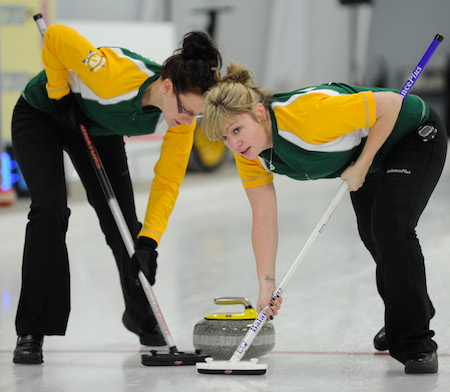 The Soo Curlers Association’s Charlie Robert was hoping to join the leaders but ran into a hot New Brunswick team skipped by Sylvie Robichaud of Moncton, who earned a 5-2 triumph. The ends were fairly simple and relatively clean with Northern Ontario holding a slim 2-1 lead playing the seventh end. Robichaud scored the first deuce of the game to lead 3-2. The eighth was blanked, setting the stage for the pivotal ninth end, where New Brunswick put the pressure on Robert, leaving him a difficult raise takeout for a single. His last stone clipped a guard, removing his own stone leaving New Brunswick with a steal of two points and the 5-2 winning margin. Both teams are 1-1. Defending champion Ontario’s Cory Heggestad also joined the leaders at two wins with a 9-6 win over a stubborn Gary Oke of Newfoundland & Labrador. With the score tied at two playing the sixth, Heggestad scored five points to jump ahead 7-2 in now what looked like a short contest. Oke, however, had other plans scoring two points in the seventh, then stealing singles in the eighth and ninth ends to be down just one point coming home. With a nice set-up of front stones, Ontario elected to draw around them but left Oke a chance to sneak in on top of it for shot stone. Oke’s stone picked, unfortunately, allowing Heggestad to throw another stone in front of the one in the four-foot. Oke had to come wide with an out-turn, hoping to catch a piece of the button for shot but he wrecked on a guard to leave Ontario the winner. Newfoundland and Labrador is winless in two starts. In the final game of this afternoon’s draw, former Canadian champion Manitoba’s Sean Grassie evened his record at 1-1, defeating the Northwest Territories’ Steve Moss 8-3. Grassie led 3-0 after two ends, then 6-1 at the fifth-end break. Moss is winless in two games. Teams with third-round byes: British Columbia, Alberta, Prince Edward Island and Québec. Round-robin games continue until Friday morning. The semifinal will be played that day at 7:30 p.m. with the Championship Final at 2 p.m. on Saturday, Nov. 23. Live scoring can be viewed at  www.curling.ca/scoreboard The Official Mixed Web Site : www.curling.ca/2014mixed-en Host committee’s web page : www.canadianmixed.com/ Facebook:  www.facebook.com/canadianmixed