After a first draw loss to Quebec, Darren Moulding is resembling an Alberta Clipper, mowing down four consecutive opponents and taking a share of the lead at the 2014 Canadian Mixed Curling Championship at the Rideau CC in Ottawa. 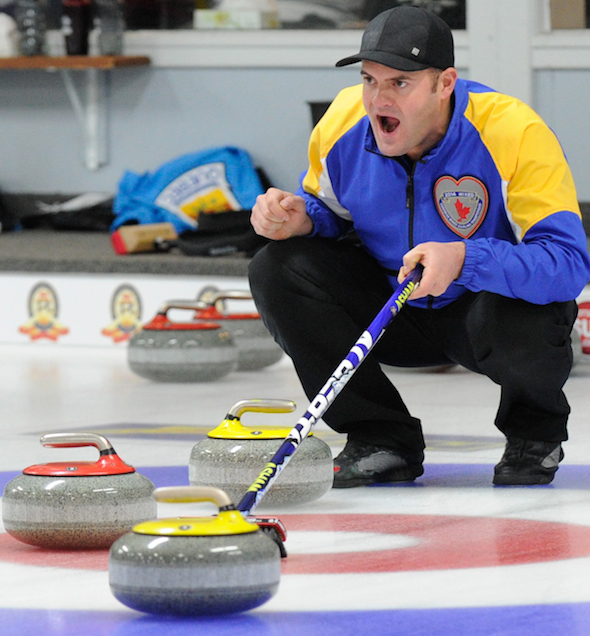 Moulding, with teammates Heather Jensen (Moulding’s sister), Brent Hamilton and Anna-Marie Moulding (his wife) scored early and often in an 11-2 romp over Nova Scotia’s Rob Harris. A three count in the second, a three count in the thirdrd and three more in the sixth highlighted the Albertans’ effort.  Moulding is now at 4-1 while Harris drops to 1-3. Quebec’s Mike Fournier kept pace but not without a bit of a scare from the winless Northwest Territories.  Steve Moss’ sYellowknife team led 3-1 after three ends and were tied with the Montreal-based team at four playing the eighth end. With a number of stones in play, Fournier manoeuvered his own stones in the right places, leaving him an open draw to the eight-foot for three points and a 7-4 lead. The ninth was blanked, leaving Quebec but to run the Territories out of stones in the 10th.  Quebec’s record is 4-1 while the NWT is winless at 0-4. 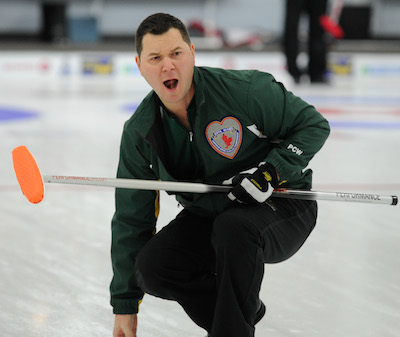 Northern Ontario’s Charlie Robert made a lineup change for his encounter with P.E.I.’s Rod MacDonald, and it paid off with a 9-8 win. Alyssa Begin and Lindsey Miners changed positions  Miners from vice-skip to lead while Begin assumed the third position. Early on, the change didn’t look like the right call as the Soo Curlers Association foursome trailed 5-3 after five and was one point down playing the seventh. An errant draw by the P.E.I. skipper in the eighth, however, allowed Robert to steal a big four points, now leading 8-5. But hang on, P.E.I. then scored a single in the eighth and stole two more in the ninth end for an 8-8 tie coming home.  n his first stone of the last end, Robert made a nice double takeout on a P.E.I. guard onto P.E.I. shot stone in the four-foot, leaving MacDonald a draw around a corner guard. It went a little deep to the back eight-foot, and Robert then drew the full eight for the winning point. Northern Ontario is 3-1 while P.E.I. drops to 1-4. In the last game of this evening’s Draw 7, British Columbia’s Keith Switzer posted his second win of the tournament, stopping Gary Oke of Newfoundland and Labrador 8-4. Oke led for the early part of the game until Switzer counted three points in the sixth, then stole two more in the seventh to lead by four. The teams traded singles in the eighth and ninth ends before Oke conceded the game. B.C. is now 2-3 and NL 1-3. Teams with the evening byes: Ontario (3-1), New Brunswick (3-1), Manitoba (1-3) & Saskatchewan  (3-1). Round-robin games continue until Friday morning. The semifinal will be played that day at 7:30 p.m. with the Championship Final at 2 p.m. on Saturday, Nov. 23. Live scoring can be viewed  www.curling.ca/scoreboard The Official Mixed Web Site  www.curling.ca/2014mixed-en Host committee’s web page  www.canadianmixed.com/ Facebook  www.facebook.com/canadianmixed